There is a unique proof sheet being offered in the latest highly football-centric auction over at BST, namely a 33 card block from the 1968 Topps Football Teams set -- in turn the insert for the 1968 Real Cloth Football Patches issue. I've briefly covered the patches before, scroll down to the middle of the post on the link if interested.

Here is this beauty, complete with the cutting guide lines: 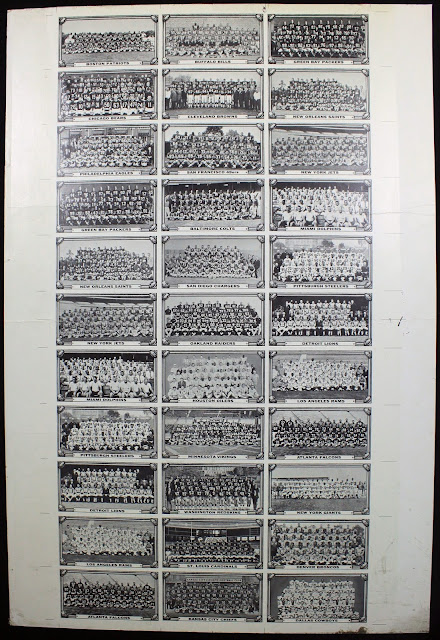 Eight cards are double prints: The bottom eight cards in the first column are repeated in the top eight rows of the right column. The Packers, Saints, Jets, Dolphins, Steelers, Lions, Rams and Falcons are all DP's on this proof sheet. I'll get back to these shortly.

Here's the back for fun-looks like a final, finished proof: 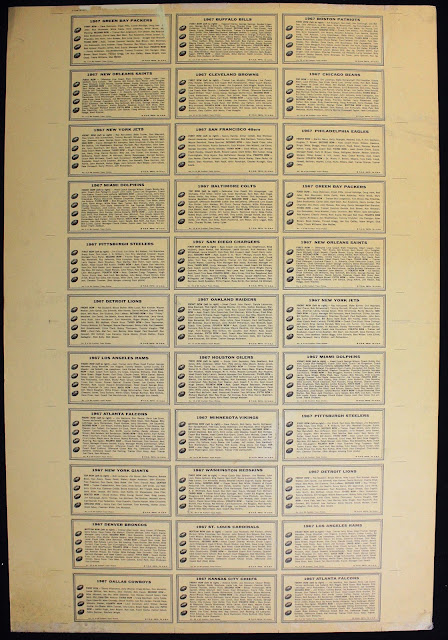 Both sets were true hybrids as they included both AFL and NFL teams. The Real Cloth Football Patches, which seemingly had a rock solid pairing of "cloth" sticker and backing--an issue that would later vex Topps for the better part of the 70's--had all 10 AFL teams represented along with the 16 NFL teams of the time, plus there were letter and number patches that were half the size of the regular patches but came two to a card.  All told 44 patches can be found with some difficulty but since they used fanciful logos created by Topps, there would be no licensing issues at the time. 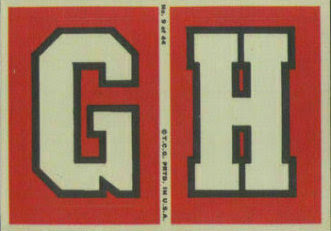 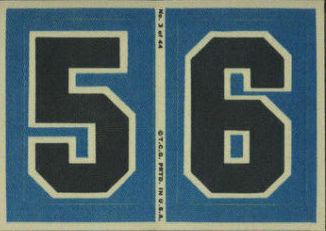 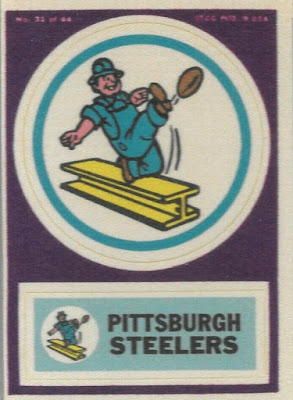 The Team cards are a different matter entirely and are much more difficult to track down. First off, there is no Bengals card, that team having just joined the AFL for 1968.  So instead of 26 teams, only 25 had cards in the black and white set (each measured 2 1/2" x 4 11/16").

The story is that the combined patch/card issue sold poorly and the excess (apparently all packaged up and ready for sale otherwise) was dumped in a landfill by Topps near Duryea.  Well, I believe that latter point as it came from an unconnected third party account but think the reason they got dumped there was because of the AFL/NFL combo being used.  Topps combined, for the first time since 1961, both leagues in their 219 card regular issue set in 1968 but did not use official team logos, instead using the ones replicated on the cloth patches. Players had their pictures taken with their uniforms reversed or having any team identifiers carefully hidden from view and any helmets had logos obscured in some fashion.

The B&W Team cards however, looks like formal team pictures and one-the St. Louis Cardinals-features their true NFL logo in the background. I have to think it possible there was some sort of overriding league related licensing issued that quashed the sets and caused the dumping of same; it was not like Topps just to dump excess inventory as they would find ways to reissue or re-use it.  I suspect they had to agree to destroy the remaining stock.  Just a guess but it fits. I also believe there are far fewer team cards available than patches, so Topps may have retained the latter and got them out there somehow later on. Friend o'the Archive Mike Thomas advises any Team cards he has seen have a gum or wax stain on the reverse.

Now, with a 33 card proof sheet, questions arise when a 25 card set is wedged within.  Check out this 99 card 1964-65 Topps Hockey Second Series sheet once offered on topnotchcollectible.com 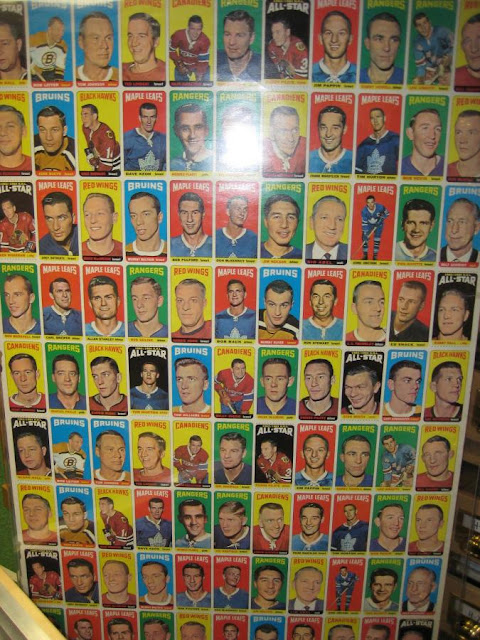 The Hockey cards are also Tall Boys, i.e. the same size as the football Team cards. Topps almost certainly printed the football tall boys in a 99 card array as well but the question is: did they just repeat the pattern of SP's and DP's or did they make up each 33 card block differently?  I lean toward the 33 card proof array just repeating twice more on the sheet myself and existing populations plus comments I solicited from several advanced collectors support this idea. All in all I will say the SP's match up with my understanding of which cards are harder to find.

Thanks for sharing this great find. I love the 1968 Topps Football and Cloth Patches set, although given the scarcity I haven't made much progress in putting together a set of the team cards or the patches.

Here is my look at the patches and cards:

I think your theory that the NFL had more to do with the cards that ended up in the landfill than poor sales makes sense, as I agree Topps would likely rather not just want to dump product unless they had to.

However, I'm not sure it was due to the logos. Some of the logos on the patches and the 1968 & 1969 Topps Football cards do look a bit homemade, but for the most part, they do match the logos that the teams were using at the time, or had used in the past.

Here is an Coke ad from 1966 that has a number of logos that match:

Many of the NFL logos are also on this sheet of NFL pennants:

Here is a look at the AFL logos from the time:

The AFL logos look a bit more handmade, but do match up pretty close to the teams' logos except for the Jets and Bills, which do appear to have been made up by Topps.

The reason I don't think the logos were the issue is that there were NFL logos on some cards. For instance, the 1968 set does feature logos on helmets, such as card # 74 John Mackey, # 93 Bobby Bell and # 163 Andy Russell. The 1969 set also features helmets with logos, such as #33 Boyd Dowler and #214 Tom Vaughn. It wasn't until 1970 that Topps had to start airbrushing logos.

If I had to guess, I would say there was an issue selling team photo cards where some of the people pictured on the card were not under contract to Topps.

For example, I'm looking at the back of the Rams team card. It lists the Team Physician, the Equipment Manager, and a number of trainers and assistant coaches by name. I would not imagine all of those people had contracts to appear on Topps cards.

Unlike team cards in a regular football or baseball set where you can barely tell who is who, these cards list by name all of the people pictured. Perhaps the fact that they were listing everyone by name on the back of the card became an issue since Topps didn't have contracts with everyone pictured, so rather than having do contract with every single person pictured, they decided to scrap the cards.