One of the stranger things about collecting type cards is that once you settle upon a collecting plan, you can end up with some pretty esoteric items to fill out your run. My plan consists of finding an example of anything Topps released in a pack at retail from 1948-1980, across all lines, excluding pure confectionery items that did not have an accompanying product. Topps referred to such issues as "novelties" originally, meaning a candy or gum issue that came with an "extra" component or two and I've tried to stick to that meaning.

This puts true test issues, limited and regional products and of course run-of-the-mill general releases, plus things like wrappers that have tattoos on their flip sides. I do also collect some ancillary items like internal mockups, premiums, examples of Bazooka comics and the original Topps Gum wrappers, but those are not part of the main sequence.

Of course, this means things get a little weird sometimes and one issue that certainly fits that particular bill is 1976's Fancy Pants.  Dubbed "Real Cloth Jean Stickers", this small set consists of 31 denim-like stickers that were meant to be applied to clothing and in particular, from the look and shape of them, pockets thereon.

Tell me this isn't a period piece! 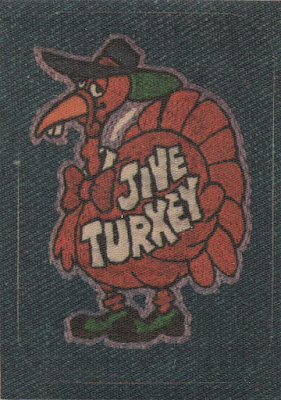 There's action on the reverse as well: 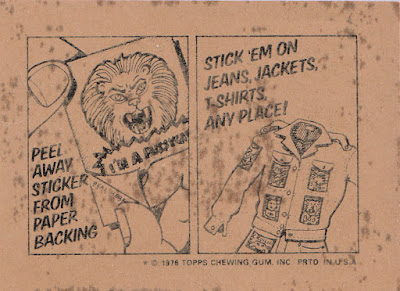 Also in the pack was a puzzle/checklist card, designed like those that came with Wacky Packages, where you needed nine cards to complete the puzzle.  It appears to be an enlargement of the George Washington For President sticker. 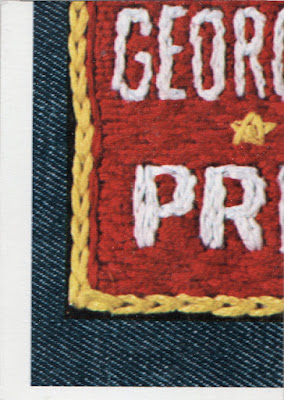 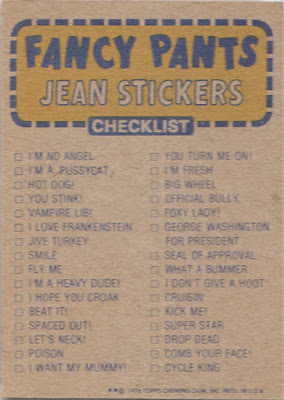 1) The set is clearly truncated at 31 stickers.  33 subjects would be the norm at the time, so 31 screams that something or two deemed potentially offensive was removed by Topps brass at the last minute. I'd wager the original length was intended to be 33 stickers.

2) The sticker adhesive looks to be seeping through to the backs on most examples I've seen, which ain't many. This effect happens with many sticker sets of the era.

3) These are incredibly hard to find. The PSA pop reports reveal they have graded 11 stickers overall, with no more than one of each subject graded, plus two checklist cards  That's it and the majority of stickers have received a grade of 4.

4) Images of all 31 stickers can be found over at Todd Riley's non-sport.com site

5) The wrapper is clearly done test-style and coded T85-5: 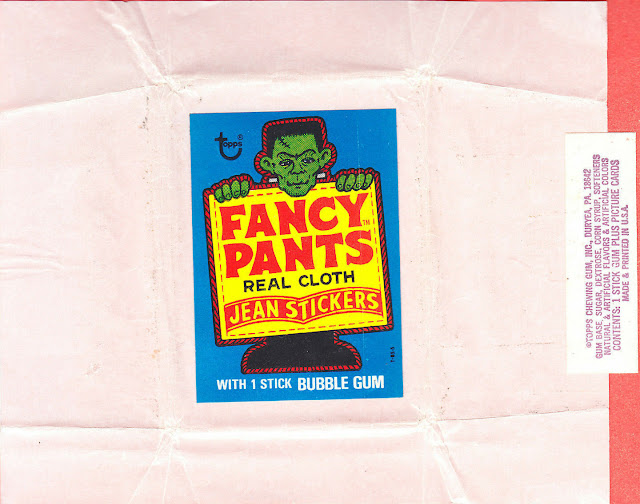 This is without a doubt, one of the toughest test issues from Topps, even more impressive since it's a mid-70's release and their issued quantities at the at time generally were in excess of their 1960's test output.

Do you think these stickers were machine washable?

(Longtime reader, first-time commenter. There's so much great information here on the blog. You must do a tremendous amount of research, and it's much appreciated.)

I don't think they would survive more than one wash, if that even, unless somehow the adhesive bonded to the actual fabric of the clothing. The front is pretty sturdy as stickers go and it is stuck on the backing quite tightly, at least the one I have is, and doesn't seem like it would "float" off it like some of the glossier stickers do over the years. I'd imagine a good many of these ended up at the bottom of the washing machine or dryer!