Well gang, it's been over decade since I last took a look at the 1976 Topps Cloth Baseball Stickers. Thanks to a recent Love of the Game auction, an interesting proof or concept piece has turned up.

The stickers themselves are of course,a  two man set: Duffy Dyer (shown as a Pirate) and Bob Apodaca (depicted with the Mets).  The unique thing about the prototypes is that four different textures were believed to have produced, some with out any backing affixed.  These were:

However, the LOTG lot featured two additional types, namely an almost sheer cotton material and a thin paper version, which looks like final production proofs on bright white paper, which was how Topps would check colors back in the day, as evidenced by the 1967 Baseball white proof panel that I showed here almost around the time I first posted about these stickers: 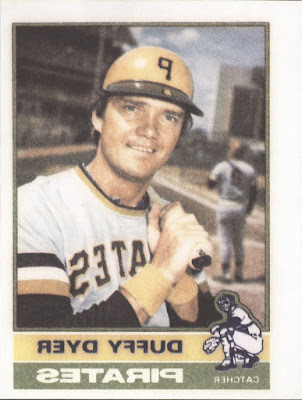 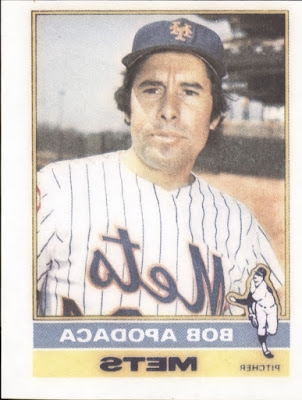 The reversed images are interesting as at least one type of material had the image printed on the reverse of sheer material.  I wonder if Topps also experimented with iron-ons as well, given the cotton proof panel LOTG offered: 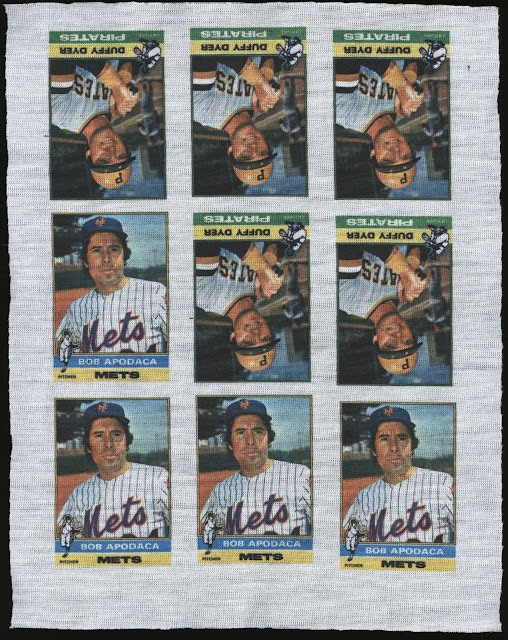 The lack of uniformity and upside down examples among the spacing is odd, no?  The Dyer/Apodaca combos match the sticker backed two card panel I own and in my last look at this set I opined the Dyer seemed a bit easier then the Apodaca to find (across all types of material).  If the 5:4 ratio on the panel above holds true, that would explain why.

I suspect there is even more to learn about this "set".  Some type of small hoard of at least one material type must have been unearthed at some point in the last 15 years as they are offered somewhat regularly on eBay.