A couple of Woody Gelman and Card Collectors Company related tidbits are offered today kids, which shed a little light on some dusty hobby corners.

Kicking off, we have a page from the May 1954 hobby publication called the American Card Collector, which looks to have been typeset in the same font as the American Card Catalog, making this a truly professional endeavor despite the "statue" typo in the lead paragraph. That's no surprise as Dr. Lawrence Kurzrok was in charge of this quarterly. Dr. Kurzrok was a notable collector of the day and friends with Woody Gelman, which explains the font (Gelman was Associate Editor in charge of Advertising and Publication for the 1953 ACC) and also this Woody-related piece : 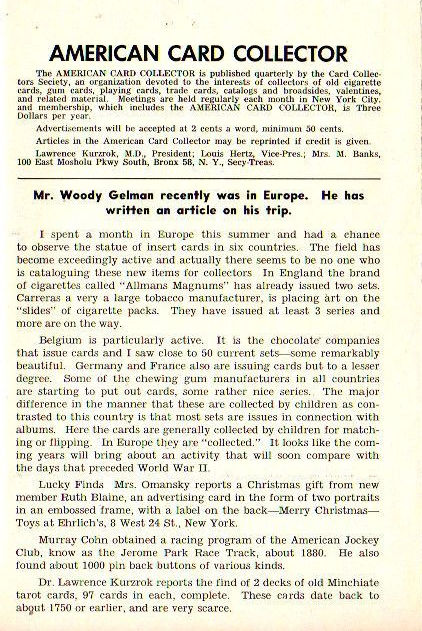 There is some backstory here, namely that Woody went overseas with Joseph Shorin (and presumably others from that Topps owning family) to attend the Coronation of Queen Elizabeth II.  At some point he ended up in Belgium, which, if you've ever been to both countries, seems a wise choice, especially as Old Blighty was very much still recovering from the war. Four more countries were visited on his Continental Tour. That tarot card find by the good doctor seems to extend beyond ACC reach, no?

Next we have a CCC catalog from 1976, that sets the date of their infamous warehouse fire as March 30, 1975.  It was a big fire and their building's roof collapsed-this was not at a Gelman residence but in a Franklin Square shopping center. 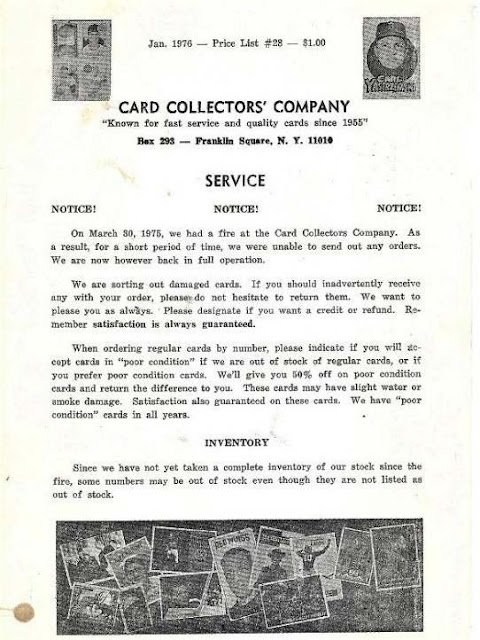 Singed and water damaged cards were offered at a big discount but also got sent out with regular orders and any complaints due to this unexpected "surprise" were met with undamaged cards being sent as replacements.  Contemporary reports from several collectors indicate the damaged cards did not even have to be returned, despite the commentary above.
Oh the humanity!