Well, it took a Fleer fanatic to provide the answer but the riddle of the 1970 Topps Super sheet arrays has been solved. Yes, Friend o'the Archive John H, over at the Fleer Sticker Project blog, sent along an image from an old Topps Vault auction showing the entirety of Slit A and the elusive two left-most columns thereon.  And without further ado: 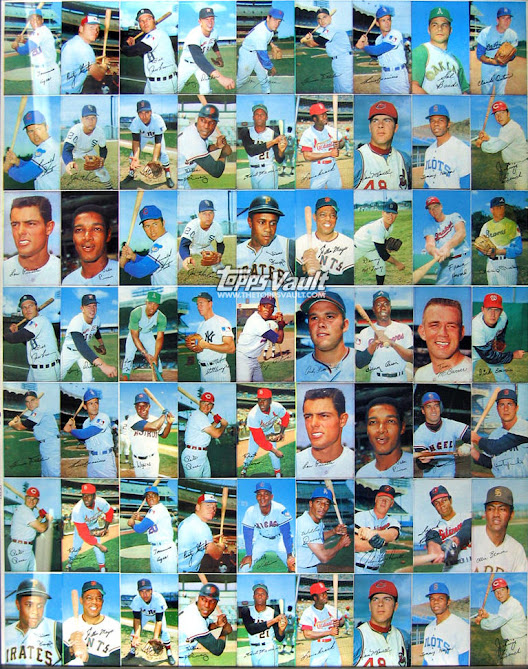 The first thing most folks will notice is that the Powell card does not reappear in the two leftmost columns!  I have no idea why Topps went with this amazingly confusing array across both slits but Powell was either deliberately super (*groan*) short-printed, somehow damaged in one location or just plain missed but it's bizarre. Really, why not just print all 42 cards three times over two sheets for a set almost no kid would ever be able to fully collect when it was issued?!

The next thing to know is that this confirms the conventional hobby wisdom as to the other short-printed cards (it happens sometimes).  Here is the two-slit impression count:

The last thing to know (OK maybe not) is that the McCovey and Clemente cards, with big white stripes at their resepctive tops in some examples, were in the middle of the arrays; the A slit versions though do seem to display some excessive white strips on those two.  I can't blow them up enough without losing details but the Stargell at the bottom left corner above also has a ton of white atop it as an example.

Alrighty, back in numerical order for one last list:

The 1971 Super Baseball set appears to have been printed in full twice across both slits-no fun there!

Great research on this great set. Glad I was able to help with the final piece of the puzzle. Its nice to see the time spent saving pics from the Topps Vault auctions ended up being useful!

Looks like the Gibson photo from this set was used for the regular 1971 display box, but the photos for Bench, Yaz and Powell are not the same.