Topps was very much focused on entertainers as they launched what we now call standard sized (2 1/2" x 3 1/2") cards in late 1956. Elvis Presley was the first set issued in this now ubiquitous format and the majority of sports and non-sports sets followed thereafter in rapid succession. This card and related press sheet sizing dictated set counts to a large degree as the familiar 12 row by 11 column half-sheets debuted.  Sometimes (and properly) called "slits" but commonly thought of these days as an "uncut sheet", these became the default for Topps, with variations and other groupings such as short prints and double/over prints usually following the "rule of 11" as a result. You need two half slits to make a full sheet up and in standard sizing that results in 264 cards being arrayed across the A and B slits. In 1957 this all came together (or maybe apart!) in a diverse set called Hit Stars.

While some guides indicate the 88 subject set has 33 overprints, this appears to be based upon an erroneous assumption that the uncut sheets were produced in an 11 x 11 array, yielding 121 cards per slit. I'm not sure why the sheet was assumed to be set up that way but it may have something to do with several sheets from various sets that have surfaced from 1957-58 over the years that are ultimately missing a row. It would be very strange if Topps had pared back to a 121 card slit at this point and to me, as I will explain, it's clear the Hit Stars was originally to have been 99 subjects in length. This theoretically would have yielded--you guessed it--33 overprints!

We'll see how it's known the original set length was truncated in a minute but if there are indeed 33 overprints (and I am not convinced of this due to PSA pop reports), then it's likely due to the original configuration of 99 cards being abandoned vs. an 11 x 11 array being deployed. A simple mathematical exercise shows that could (and I stress "could" not "would") have resulted in 33 extra slots across each slit (99*2=198+66=264). My own thought is Hit Stars repeats three times across both slits in classic ABA BAB pattern, where each letter represents a discrete 44 card block. And I will also point out the 11 x 11 arrays were used for smaller sized cards like Scoop and not those of standard size.

The set itself has a pretty good mix of movie stars, TV personalities and recording artists-including a large percentage of cards devoted to African-American singers, who were not necessarily considered "mainstream" at the time- and there are a hefty number of record labels, both large and small, represented amongst the Recording Stars. Some very big names are included and the entire set is a veritable Flexichrome wonderland. 62 Recording Stars kick off the set and Elvis reappears after his '56 Topps solo stint: 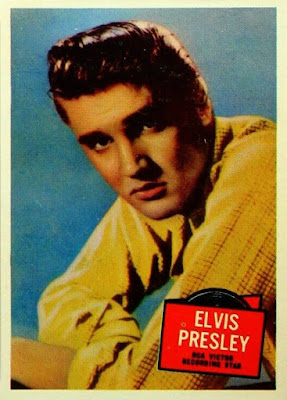 Elizabeth Taylor was certainly rounding into"A" List celebrity status at this point in her career and a good "get" for Topps: 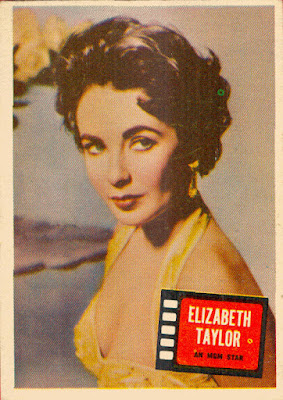 Some subjects appear more than once (4 posthumous cards for James Dean!) and a couple are considered both Recording Stars and TV/Movie Stars.  Here's a good example of that in Debbie Reynolds, first seen on #17 as a Coral Recording Star: 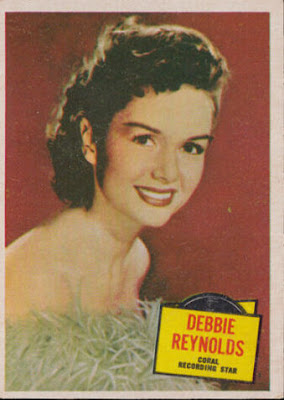 The reverse confirms the count of 62 Recording Stars (Frankie Laine repeats too in this sub-grouping and Alan Freed is included as well, even though he was a DJ): 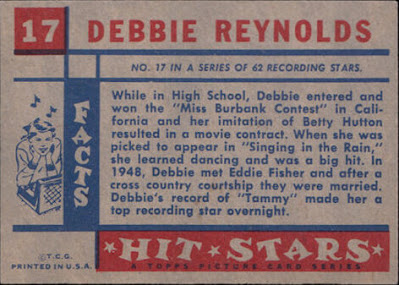 Ms. Reynolds also concludes the set on card #88, clearly as a Movie Star: 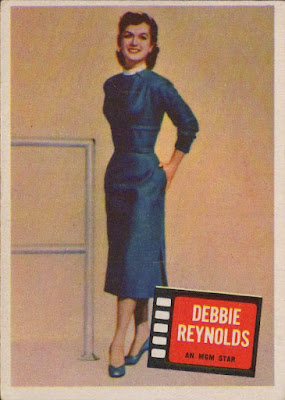 But look at this-she is number 26 of "37" Movie & TV Stars (and don't forget that includes James Dean with his four appearances): 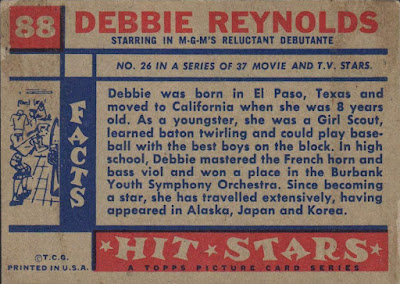 Well 62 + 37 definitely equals 99 so something clearly happened to truncate the set 11 cards shy of the promised number. At a guess, rights for some planned subjects never matarialized or a studio or two pulled their stars.  No matter, the Topps math just didn't add up!  Go figure!

Carrie Fisher had several Topps cards as Princess Leia. How many mothers and daughters have both appeared on Topps cards? Can't be many.