With the primary focus here shifting to the 60's and 70's, I thought it would be a good time to run through some of the key phrases and nomenclature I use to identify certain traits of historical Topps production.  A number of these identifiers were covered in a post a while back that got into things such as eras of card production and the difference between a proof and test issue, so this one will mostly cover things not addressed previously.

Rule of 11: This is a phrase I coined to describe how most patterns in standard sized Topps sets are divisible by 11.  This is due to the row length on the half sheets being 11 cards in length.

SP, DP, TP, QP, OP: These are some of the most useful abbreviations there are as they describe how many cards were produced on a sheet, or in a set or series relative to other cards:

Short Print (SP) - Can also stand for Single Print.  A cards printed in lesser quantities than the majority of cards on a sheet.  Usually this means by a factor of half but not always. Many cards identified as SP over the years in price guides were designated so on the basis of observation of half sheets and may not be short printed at all.  While a card can be an SP on a half sheet,  in order to determine if a card is truly short printed within a series or set, the full sheets must be seen.

Double Print (DP) - A card appearing twice as often as other cards. A 110 card series printed on a half sheet of 132 would have 22 DP normally.

Triple Print (TP) - A card appearing thrice as often as other cards.  A 55 card series printed on a half sheet of 132 would have 22 TP.

Quadruple Print (QP) - A card appearing four times as often as other cards. Unusual but not unknown. a couple of 1955 Baseball cards may fall into this category.

Over Print (OP) - This can mean a variety of things. It's sometimes used to identify cards printed in a ratio of 3:2 but it can really refer to any card printed in more quantity than an SP.  It can also refer to part of the printing process where one image is inadvertently printed on top of another.

Theory of Checklist Relativity: Another phrase of mine. This refers to Topps seeding a checklist from the next series in all but the high number packs from 1961, the year individual, numbered checklists began, through 1972, the last year of cards issued in series. For example, they would print the second series checklist on the same sheet as the first series cards and do so throughout each press run/series. This was a cheap way to preview what was coming in the next series. It also led to myriad checklist variations over the years.


Series Lagging:  Topps would, in addition to seeding checklists, lag their series counts in many sets from 1958-66, especially Baseball. Take a 110 card press run (leaving 22 DP on the half sheet). Now make the first series 88 cards and show it that way on the corresponding checklist.  That leaves 22 cards above #88 that are shown on the second series checklist which were printed in the first press run, although the inclusion of the next series checklist reduced that count by one with with each successive series (so Series 1 ends with #109). The last series would see the numbering and series matched up again. This was another way to entice kids to buy the next series. Once the set sizes started growing in 1967, the series checklists added more cards and the practice stopped. Note too that from 1958-60 checklists were printed on the backs of team cards while the 1957 checklists were inserted into the packs and were not printed with the rest of the cards.

Here is how series lagging played out: 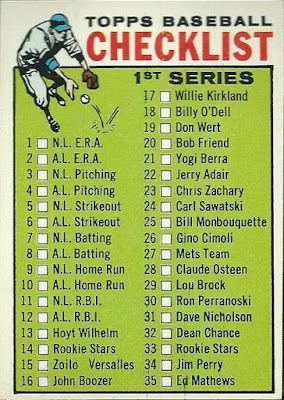 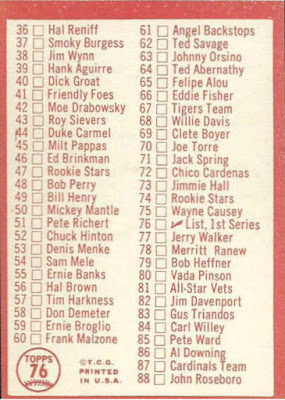 Now take a look at this uncut full sheet from 1964. 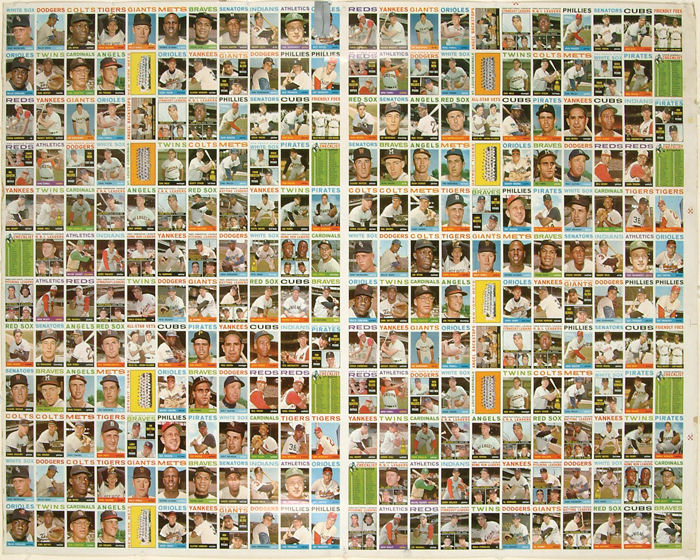 You can easily see two half sheets with the gutter down the middle and starting on the left side, lettering the rows gives you:

Rows A, B, C & D are over printed and appear three times over the full sheet, while rows E, F, G H, I & J are short printed and only show twice. This is a 3:2 ratio. So we also have overprints.

The patterns such as checklist placements, overprint ratios and even the arrangement of each 11 card row do not necessarily repeat like this for all series or years. Why Topps did things a certain way I can't really say but this first series sheet from 1964 really illustrates a lot of their marketing strategies.
Posted by toppcat at 8:00 AM