More 1952 Bowman Extension Series (from TCMA 1983 in case you forgot) bio today, as we look at Barney McCosky, a player somewhat akin to Ferris Fain in offensive skill with high contact rates and a stellar OBP.

Here is our progression for McCosky: 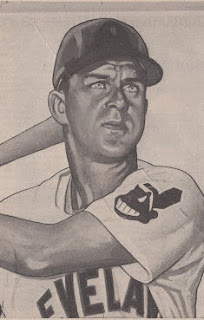 As noted, he could hit: 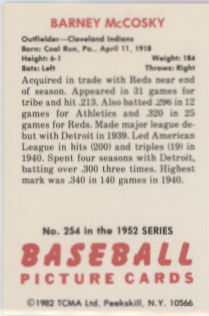 Pennsylvania-born in 1917 but reared in Detroit from the age of 5 and signing with the hometown team after his high school graduation, McCosky made his minor league debut with Beaumont in the A1 level Texas League in 1936. Beaumont, despite being playing at a level below the top-ranking (at the time) AA minor leagues, was the main feeder team for Detroit.

He struggled and after 20 games was demoted three levels to the class-C Charleston (West Virginia) Senators of the Middle Atlantic League, where, despite their team name, they affiliated with the Tigers.  McCosky then tore off a league leading .401 batting average to finish the year with a very loud bang. He stuck with Beaumont in 1937, and put in two solid seasons toiling in the summer sun of Texas, then earned a roster spot with the Tigers in 1939 after a breakout spring training game against Whitlow Wyatt of the Dodgers.

McCosky wielded a hot bat and roamed center field for his first three seasons in Detroit and helped lead the Tigers to a 1940 World Series appearance, where they lost to the Reds in 7. A back injury during the 1941 season would prove to be his undoing as a Center Fielder and he was displaced to Left in 1942 by the much older Doc Cramer, who had arrived in Detroit via a trade with the Senators. He joined the Navy after the 1942 season and was discharged in October 1945, too late to rejoin the Tigers as they won the 1945 World Series without him (and earned Cramer a ring).

He did not hit well in his 1946 return and Detroit, shockingly, traded him to the Athletics in mid-May for future Hall-of-Famer George Kell. The trade reignited his bat and he also returned to Center for the remainder of the season. He produced at a high level through the 1948 season for Philly but spent those two years in Left as his back injury flared up, tamping his speed.

McCosky then missed all of 1949 with, you guessed it, back trouble after bending down to grab a baseball during the first day of spring training and not making it back to the vertical.  Surgery followed and three of his vertebrae were fused together, which was possibly a career-ending move then (and now).  He fought back though and made the 1950's A's roster but his bat and speed were sapped, the latter for good.  He had his contract sold to the Reds in early May of 1951 and hit a solid .320 before joining Cleveland when they claimed him off waivers in late July.

He struggled through the rest of 1951 and by 1952 was relegated to pinch hitting duties for the most part. McCosky managed to make the opening day roster in 1953 but the Indians released him in July, after he only made 22 pinch hitting appearances and didn't play a lick in the field.  He ran a business with his wife in the Detroit area for a decade then became an auto salesman for many years thereafter, passing away in 1996.  He is memorialized to this day by the Barney McCosky League in Detroit, a co-ed instructional program for kids under 17. You could characterize him as an all around good guy who didn't bemoan his bad luck from what I have read. He was a favorite son of Detroit, if you will.

Barney appeared in a number of nationally issued baseball card issues of the 40's and 50's, including 1951 Bowman but I have to believe his semi-late his appearance in 1952 Topps (#300) did in any chance of a Bowman card that year. 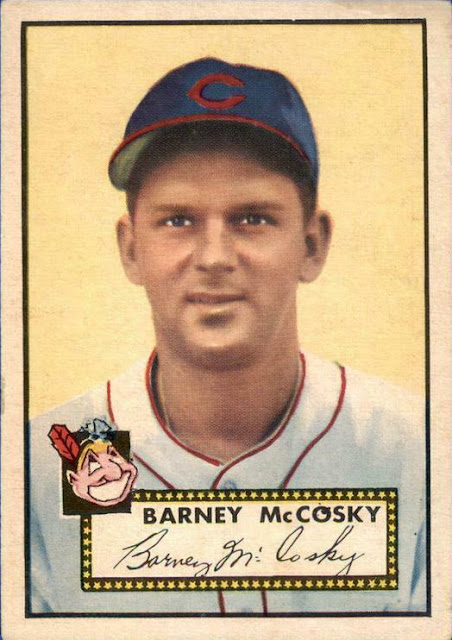 McCosky, a textbook leadoff man of the WW2 and postwar era, finished with a lifetime batting average of .312 but through 1948 it sat at an even more impressive .320, with 68 triples attesting to his speed.  If not for the three years of military service, he would by my estimation, have been considered the second or third greatest Center Fielder in Tigers history, after Ty Cobb and maybe Curtis Granderson. As it is he's in the top 10, possibly the top 5 even.  Don't believe me?  His 154 game averages from 1939-48, which covers seven seasons played while he missed three full campaigns in his absolute prime, were like so:

...plus Barney's immortalization in Frishberg's "Van Lingle Mungo." If a single poem can get Tinker, Evers, and Chance enshrined together, there's hope for the (checks notes) 33 guys that Frishberg turned into bossa nova who are on the outside looking in. (Boudreau, Campy, Lombardi, Mize, Wynn already made it.)