I'm going to start a sporadic series on some of the phantom subjects that were the focus of a post I wrote late last year that examined an old hobby article about a find of original Bowman paintings.  I was reminded by Keith Olbermann of a 1982 TCMA issue that is commonly referred to as a 1952 Extension or Update Set, picking up with card no 253.  Comprised of 15 cards that never were, I actually bought the extension set fresh 40 years ago and somewhere during the past few decades forgot I even had it!

Here is the set, freshly dug out and still in my small Bowman sheets from a long, long time ago: 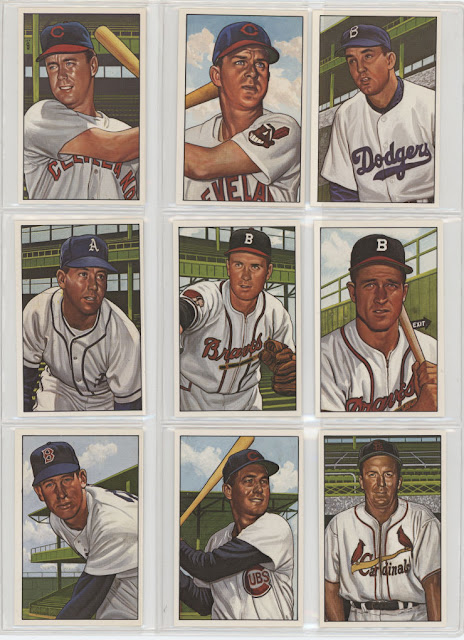 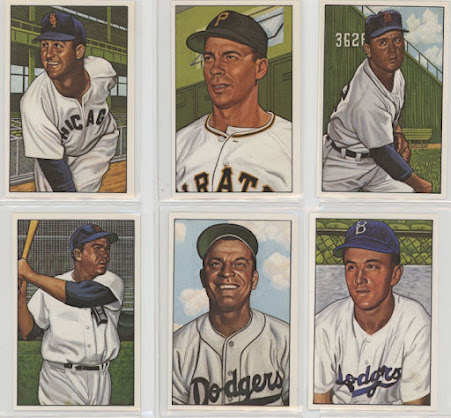 While 16 would have been a nice Bowman-esque number, I am advised the number of cards matches what was available at the time to TCMA. You will see some familiar faces above, plus some scrubs and the like.  The backs are finished and I plan to show them one-by-one as I get deeper into things.
First up is #258 Bob Thorpe.  We last encountered him in a 40 year old newsprint image: 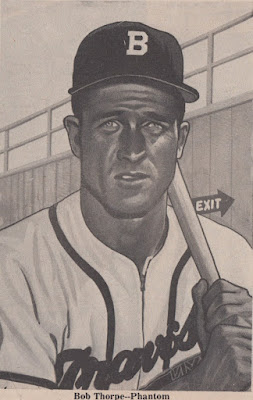 As it turns out, Keith Olbermann owns the original! 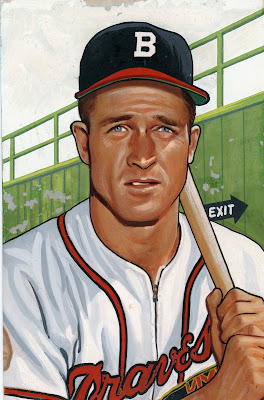 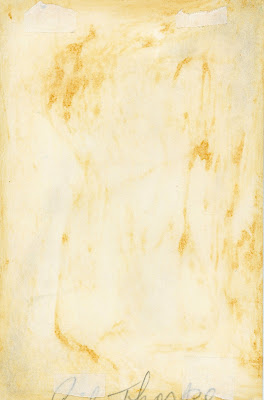 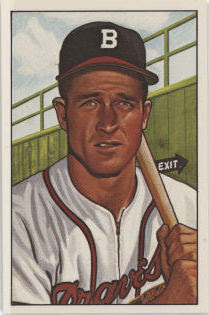 And now the reverse: 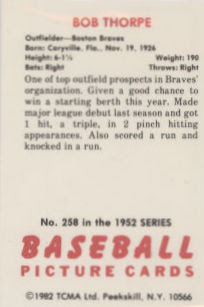 Thorpe's career, which was fairly long, was mostly spent in the minors.  He was a Topps high number in '52, which might explain his being pulled by Bowman but he also was what would be termed a "4A player" today. 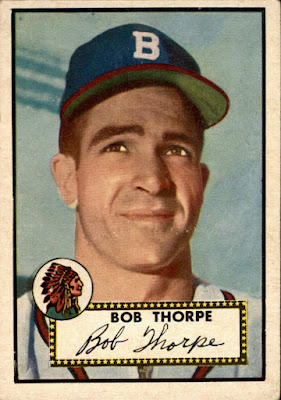 He was a described as a Navy vet and I'm sure that's correct but Topps blew his debut year: 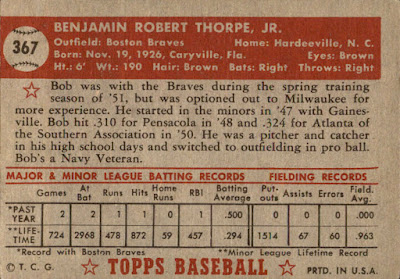 As it turns out he started in the Florida International League in 1946, playing as a 19 year old with West Palm Beach, which I think was a Cleveland affiliate. He may even have been a local signing for WPB as he played for two other teams in Florida (Gainesville and Pensacola), his state of birth, until 1950. He was acquired by Boston after that season.
It wasn't unusual to be discharged from the Navy so quickly after the war, it happened to my father, who enlisted as a high school senior in 1945 then had to wait until he graduated to get sworn in and was in the Navy all of four months before he got his discharge, although he re-enlisted for a 4 year hitch.  After Japan surrendered, ending World War 2, military service was curtailed very quickly for many men, Thorpe included it appears.
Appropriately, the FIL was C-Level (*groan*) in '46 and then it looks like he got demoted, possibly without any at bats, to Gainesville in a D-League where stayed until 1948 before progressing up the long minor league ladder. He had a cup of coffee with the Braves in 1951, as noted on his TCMA card, then spent 1952 with the big league club (and apparently getting injured) before making the move to Milwaukee with the team in '53.  He flamed out and went back to the minors in 1954, never to return to the big leagues again.  Fun fact:  He was a Boston Brave but he played in both Atlanta and Milwaukee from 1950-51 before debuting with Boston. He played for a variety of minor league teams through 1961 and then retired, passing away in 1996.
I'll pepper in looks at the players from the 1982 TCMA set and the Bowman phantoms here and there as I want to broaden my scope a bit for 2022.
Posted by toppcat at 8:00 AM