While I am by no means a collector of "modern" cards, every once in a while a newer issue catches my eye, usually due its the level of obscurity but sometimes just because they look neat.  One such set, somewhat appropriately today (in a special edition post), is the 2013 Topps Emerald Baseball Parallel.

Inserted in both series 1 and 2, plus the update series of 2013 Topps Baseball at a 1:6 per (what-used-to-be-wax) pack ratio, these can be found quite easily and all 990 (!) are among the sharpest looking parallels produced under the Eisner regime.  Here's 2012 NL CY Young  Award winner R.A. Dickey in all his green glory: Scans don't do these justice, they are Sidra-level spectacular.

The back is the same as a regular Topps card: 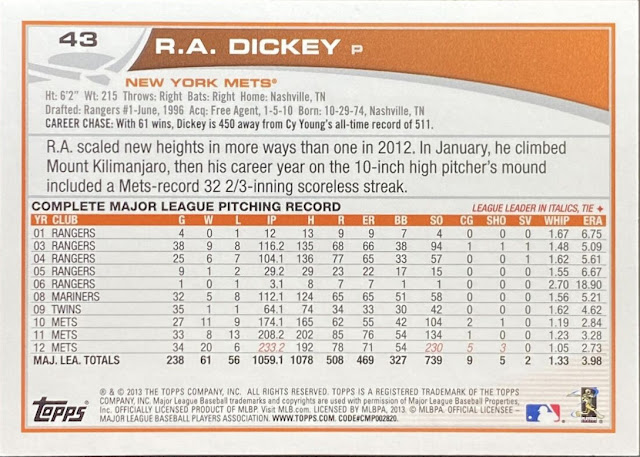 Confusing things slightly are the presence of what some folks describe as Blue Emerald parallels, which are much more limited than the greens as they were inserted into special cello packs.  I think though, that these are really what most people call "Blue Sparkle" or "Blue Sapphire" cards as I believe an emerald needs to shine green, don't you?