Going to lay some eye candy on you today kids, in the form of some Topps test packs.

Topps was infamous for running very brief tests of products in at least four ways: lab testing with kids and the product in a controlled setting, handing out test items at local schools, giving distributors and salesmen a few samples to see the enthusiasm level among their buyers, and throwing a box or two of boxes on select retail store counters and gauging the public's response. The latter method is by far the most well known today and many test products, especially those from the 1966-74 period are rare and expensive (especially if sports related) these days. Before 1966, well it's not easy to to tell how tests were conducted at the retail level.

The retail test packaging that is known today mostly was created using plain white wax wrappers, with a product sticker on the front sans price and, if the product was being tested with a confectionery item within, a small ingredients label on the back that also served to "seal" the pack.  These, it is said, often resided in a generic white box and that's presumably where the pack price was displayed as these were never marked as to cost. Around 1974 this started being supplanted by different mediums and Topps also started doing more specific tests, such as using two price points. Almost all Topps products, except their recurring annual sports issues were tested in one or more forms and almost always at the retail level. Many products failed their tests and never made it to a full blown release.  Others were designed for a regional sales campaign, or promoted from test status for such a purpose, and are often found in greater numbers than those that were just tested at retail.

Test packaging is not always extant for certain issues and of course some sets are legendary rarities.  One such set is the 1966 Baseball Punchboards where the wrapper is not even known, just a bare description of it, from Rob Lifson:

Topps designed and proofed a retail box for the set: 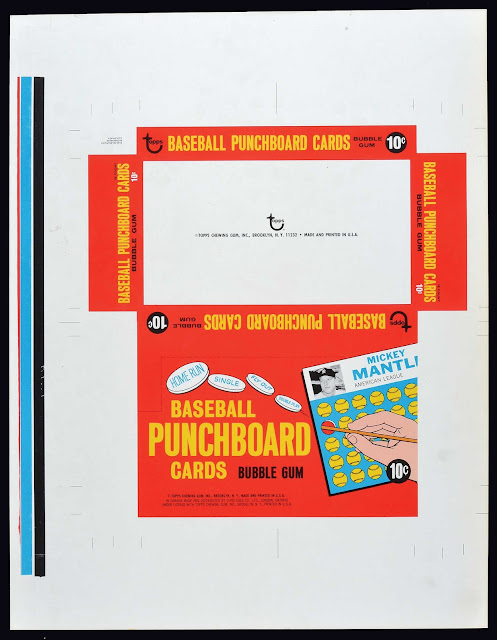 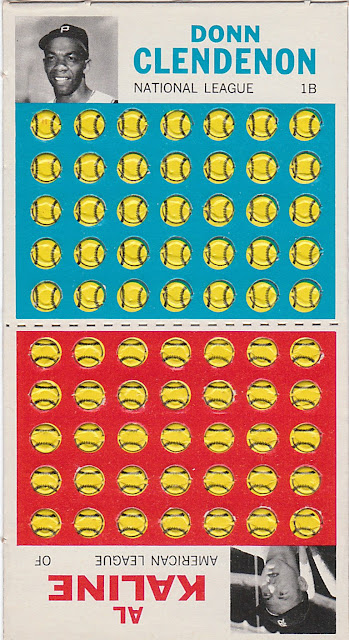 It's possible the full checklist for this set is not complete.  In 2009 14 two card panels out of what I speculated were a set of 18 were known.  I don't believe the count has changed since then.  These are among the hardest-to-find tests Topps ever created and some of the Hall of Famers can go for staggering sums.
1966 (that date may not be firm, I suspect it's a little later) also brought a tough Non-Sports test, Fold-A-Roos.  This pack illustrates how typical stickers on both front and back look: 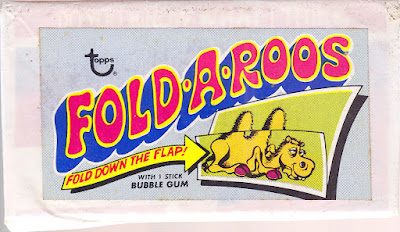 That front may not match up with this back and at least a couple of packs are known to have survived: 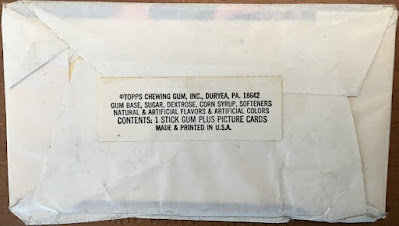 It's a tough set and not may people know about it. Being metamorphic makes it very unlikely many of these are still around: 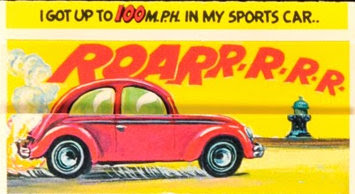 Examples of a regional test or limited issue are well-known to baseball collectors.  These two 1967 sticker sets appear to have been a test AND a regional issue. You can actually find these in the wild: 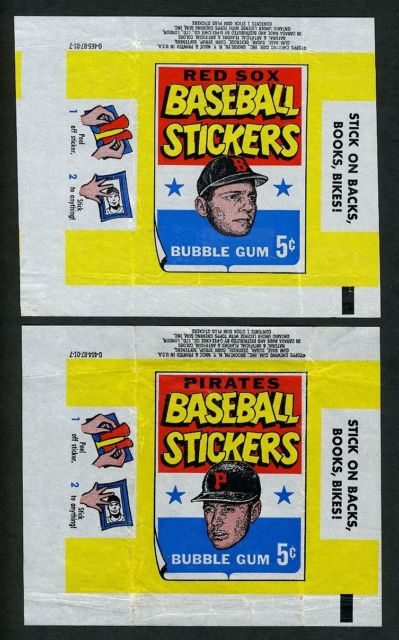 If there's a test wrapper with sticker, it may replicate the above two pack fronts. Also on display the retail box which is not plain white:

The Pirates box is known in proof form: 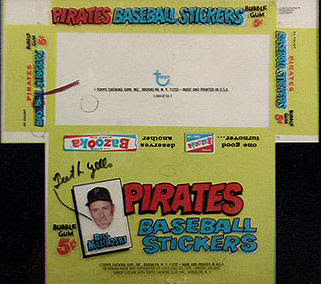 That product code on the reverse eliminates this as a test box proof.  The stickers look great BTW, with 33 per team, so 66 across both sets: 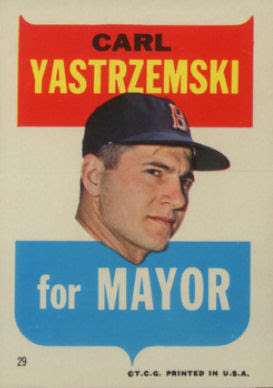 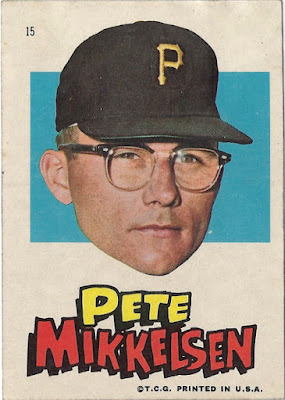 Topps thought about a similar pin issue as well that featured just San Francisco Giants but it never launched in any form except as a proof.

Here's one more for today, from perhaps the most popular of all the test issues, 1968's 3-D Baseball:

Sorry but I can't find an ingredients sticker, maybe someone will send me one and I'll pop it in here.
Back with more tests next week!
Posted by toppcat at 8:00 AM

Pete Mikkelsen name/font/design seems to be a prelude to Topps early 70s design, specifically the 1971-72 Topps Hockey and Basketball sets.