In terms of confusion, the 1980-81 and 1981-82 Basketball sets rank up there with the 1955 Hocus Focus fraternal twin sets and 1988's Pee Wee's Playhouse extravaganza atop what, to be fair, is a rather large heap created by Topps.  I don't collect the set as I consider anything hoops related issued after the ABA got busted up to be avoided at all costs but got back into the hobby just after the 1980-81 set was released and remember it perplexing just about anyone who encountered it.

To refresh your memory, Topps went back to an old formula and issued three mini cards on one standard-sized card: 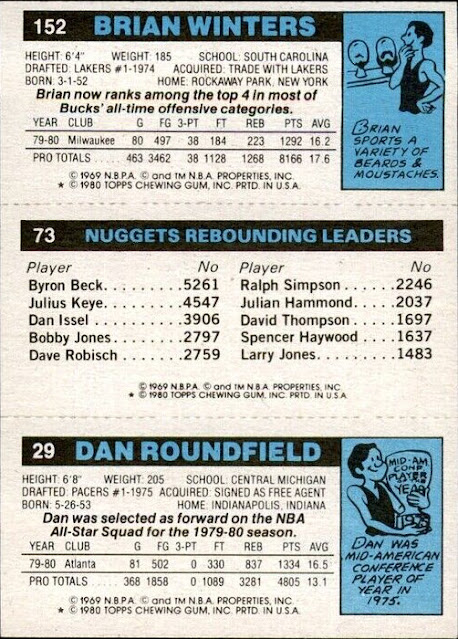 All well and good but 176 standard sized cards were produced with 264 poses featuring 168 different players!  This article from the May 3rd, 1991 issue of Sports Collectors Digest (SCD) gives you the gist (sheet shenanigans, no surprise): 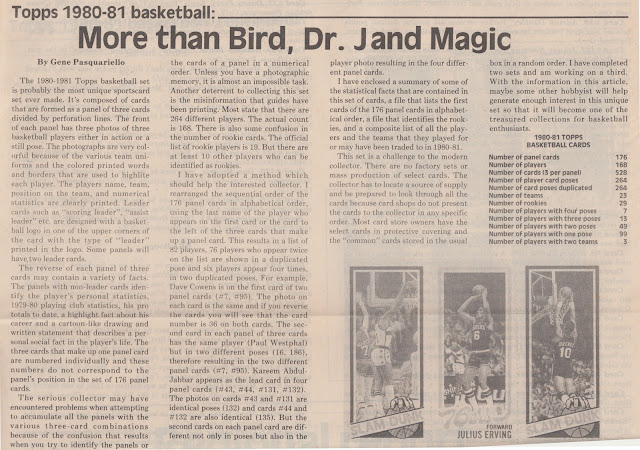 So the current day Sports Collectors Daily (which I usually abbreviate as SpCD) has nice piece on the set, with a killer image of an uncut sheet: 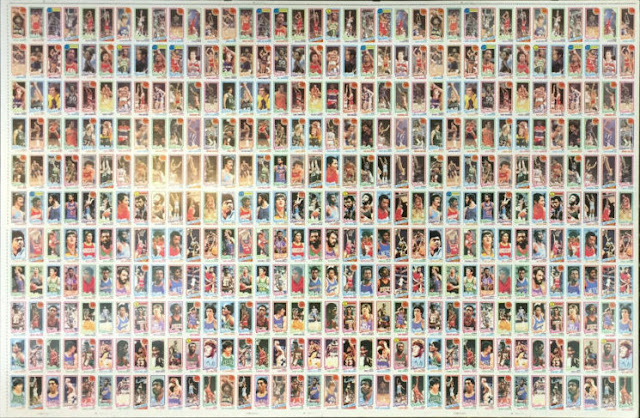 You can make yourself dizzy looking at it!  Without giving away too much of the SpCD post, there are two sheets of 88 but there are many differences between the two.  I can't find any references anymore but my recollection is that there was some kind of professed method to this madness in terms of distribution but personally, I doubt it!

The good news you can get each player with only 88 cards but what fun is that!? There were no checklists issued by Topps but SCD included a helpful master alphabetical checklist with their article, which may or may not unfurrow your brow: 1981-82 saw even MORE confusion!  A 66 card nationally distributed set was produced but then Topps added 44 cards for each of three different regions; East, Midwest and West, with 110 cards available in each Franken-set. They must have done this to stimulate sales but it apparently didn't work as they bailed on the basketball card market thereafter.

The first 66 cards comprise the National set and they are numbered 1-66, with 43 player cards and 23 Team Leader cards (four divisions with 6 in all but the East, which had 5).  Regional numbering picked up with #67. So why didn't Topps just create 4 regional sets?  Beats me!  What they did do was consolidate some teams into geographic regions that only make sense in the context of forcing the issue.

Eastern Region collectors got these 6 teams (NBA Conferences and Divisions in parentheses), totaling 63 subjects with the number of players per team varying wildly. Each team's count has their leader card in the total:

Midwest Region got 9 teams, with 65 subjects:

That's 195 subjects and each region got their own checklist card. Super Action cards of a few players were also included, in addition to their regular card in the National set but these were regional as well.

Here is a nationally distributed card, front and back: 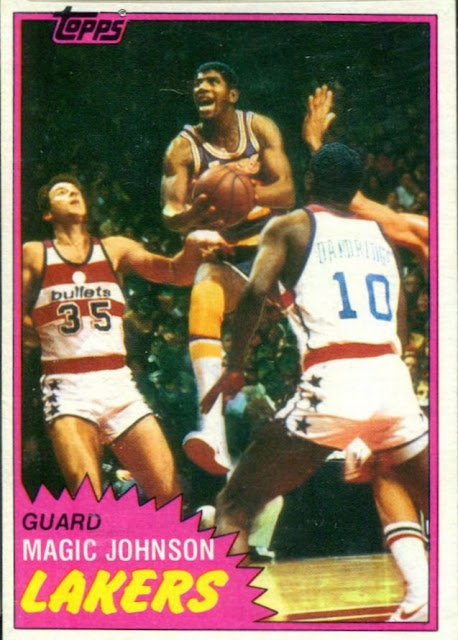 I like the little stars in the number circle but is that while semi-circular blob dominating the reverse landscape a backboard or a diagram of how to play HORSE? 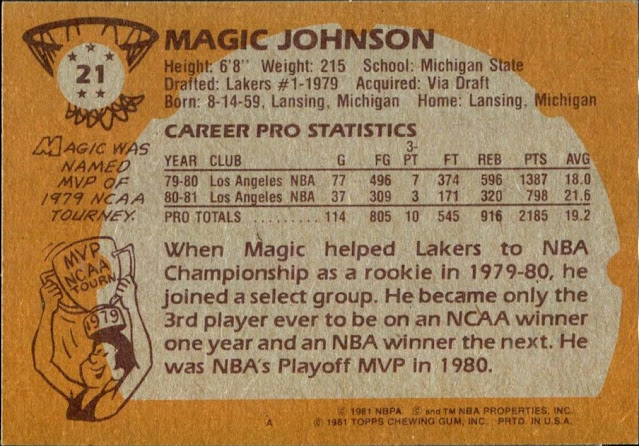 That little A in the indicia must mean it was the National set. Here is Magic's Super Action card for comparison: 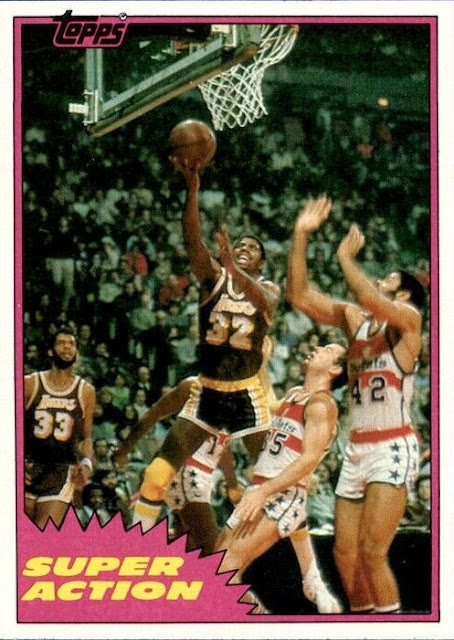 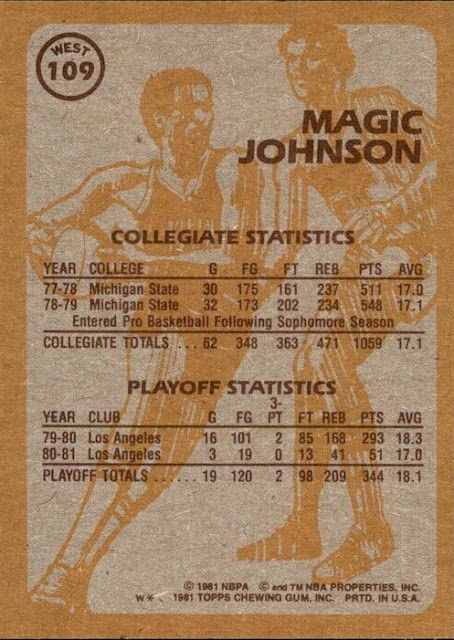 Here are the three regional reverses, with indicia for each region running up and down the right border but no indication as to which are the Super Action cards: 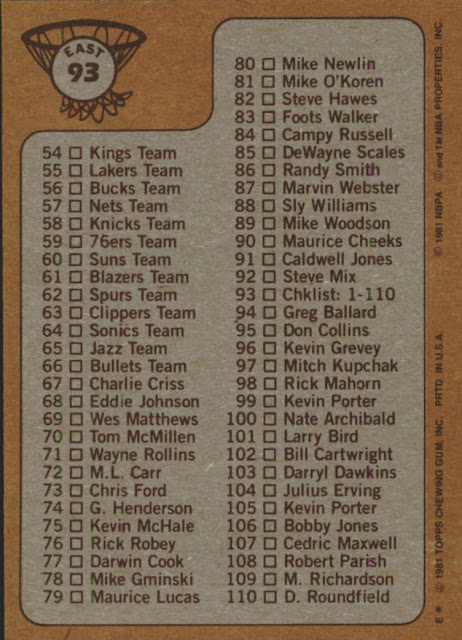 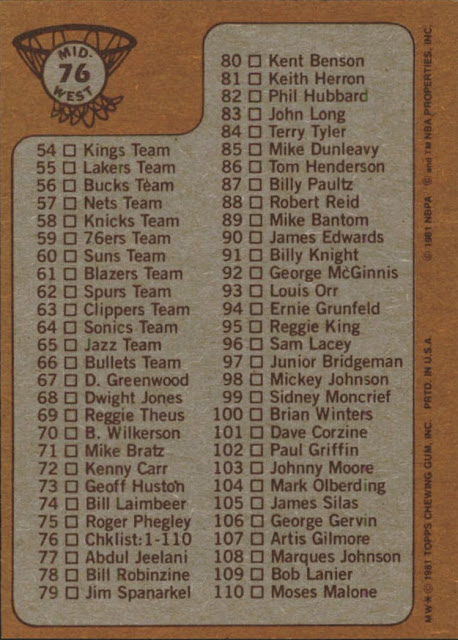 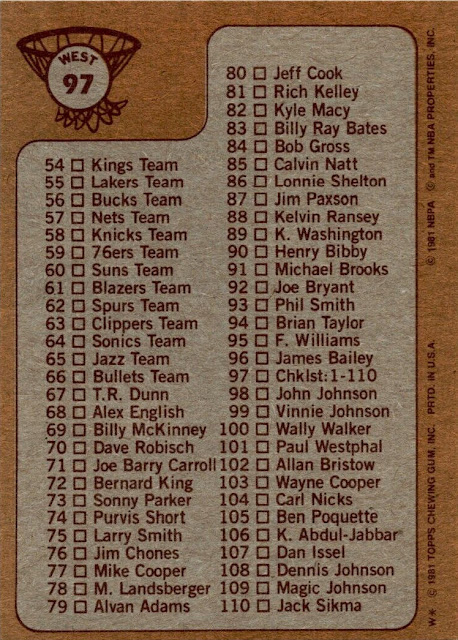 A ten year old collector in say, Detroit was probably wonder what in the name of the Wide World of Sports was going on!

Well, I might as well show a Team Leaders card to round things off: 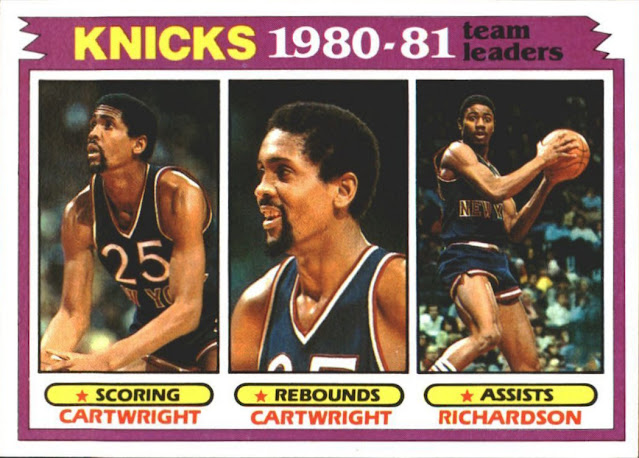 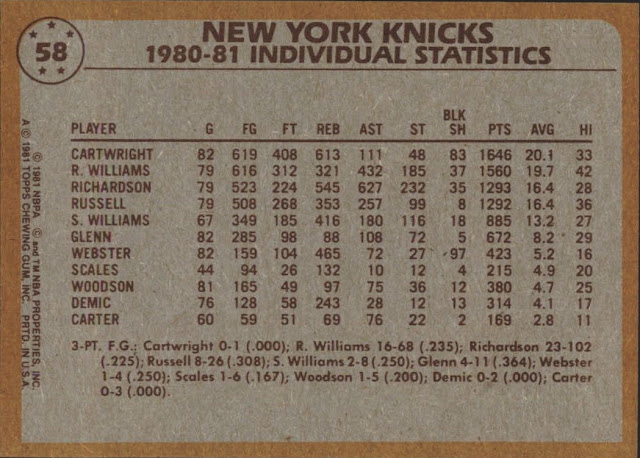 Those pesky Washington Bullets (Caps for Hockey) were always in the background of those late 70s early 80s Topps Sets.

Never saw these in packs - but got them through mail order. Topps discontinuing the NBA (just as it was started to take off with Bird Magic and Michael) just seems to be just a colossal mistake (at least had O-Pee-Chee for the missing 2 years of hickey).