Get Your Rah Rah's Out

The ever vigilant Lonnie Cummins alerted me to an interesting eBay auction recently that really blew me away.  I've covered the Topps Sports Club previously (most recently here), which was a promotional effort by the company that, given the bang for the buck, really should have been more of a success.  There were a number of pretty neat things Topps included with membership, including previews of card sets, large color photos of some top names in sports, uncut team checklist sheets plus the ability to order some spectacular premiums.  Promoted primarily via wrapper panel ads and the reverse of some Rak Pak header cards, the Sports Club debuted right as I was exiting the youthful portion of my hobby years and I never even knew about it until after I started this blog.

I've shown the advert slip for it previously but it's well worth a repeat look: 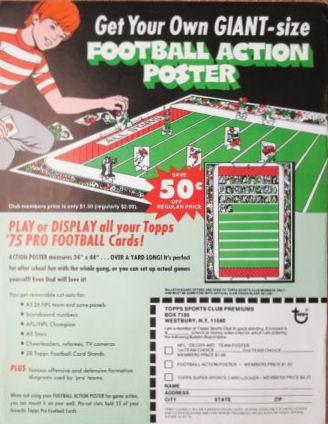 It's a little hard to read as that's an old screen grab but those bulleted items running down the left side rode along with the poster and required some effort to put together by the recipient: 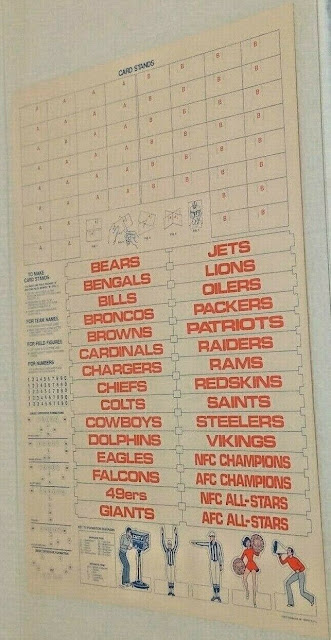 Boy, there' s a lot going on! There were a number of "card stands" you could assemble and which held, what else, Topps football cards.  Other things though, were needed to deck out your football field:

Those numbers were to keep score you also got to put team names in each end zone. Topps left nothing to chance as they gave you several formations to choose from:

Again, apologies for the fuzz-fest.   For me the best part of all this was the "field figures" along the bottom:

The cameraman is a nice touch as the poster has a TV and Radio booth (and a press box-so where's Oscar Madison?), but those refs are anticipating the plays too much!  And dig the cheerleaders: 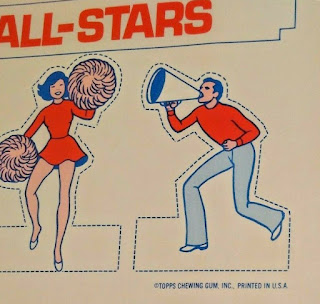 I'd say whoever drew the pom-pom girl was using Mary Tyler Moore as their basis for that drawing. As for megaphone-man, no clue. The other neat thing is that the poster was created by Topps and not just supplied by a third party.
The football field was also a Topps creation: 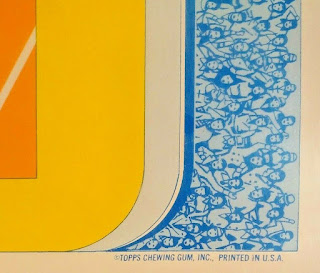 I wish I could get a better shot of the fans-I love trying to figure out when the repeat graphics start on such things!
If one of you out there had room in your man cave, I hope you picked up this remarkable premium, which was offered in two separate lots for some reason.
Posted by toppcat at 8:00 AM

Verrrrrrry interesting. I hope you can track down someone who still owns this so we can get a follow-up!

In one of the forgotten all-time great backs on a card set - Topps in a certain way - used those fans again on the back of the 1986 football set. They changed the fans for each of the teams.

The 1967-68 Hockey set had a similar crowd, although a bit more abstract, on the fronts.