The 1972 baseball season was a strange one. It started off with the first ever player's strike (an event I have no memory of, despite being a 10 year old with great interest in the sport), saw a team move from DC to Arlington, Texas (the Rangers), resulted in Curt Flood winning his reserve clause lawsuit against Major League Baseball and ended with Charlie Finley's mustachioed Oakland A's taking the first of three straight World Series titles. And after it all ended, the American league decided to adopt the Designated Hitter rule.

It was also the year that Topps went public and, to my mind, the last year in their insane stretch of innovation and creativity that commenced in 1965.  Following the IPO Topps would become a different company, as the Shorin family ceded some control of the firm they had founded in 1938. This resulted in a tamping down of production costs beginning in 1973 and a corresponding slowdown in insert and supplemental sets, especially those that required licensing from the four major sports leagues.

Surely the result of a cost/benefit analysis, in 1972 Topps dropped inserts from their four main sports lines and produced no ancillary sets to speak of, although their Canadian licensee O-Pee-Chee did manage to repurpose some older designs into inserts.  Even their non sport offerings were mostly reissues of older offerings in '72 so it's clear the IPO had taken corporate attention away from production and design matters. But before that all happened, Topps managed to design, produce one of their greatest sets of baseball cards, the psychedelic 1972's. 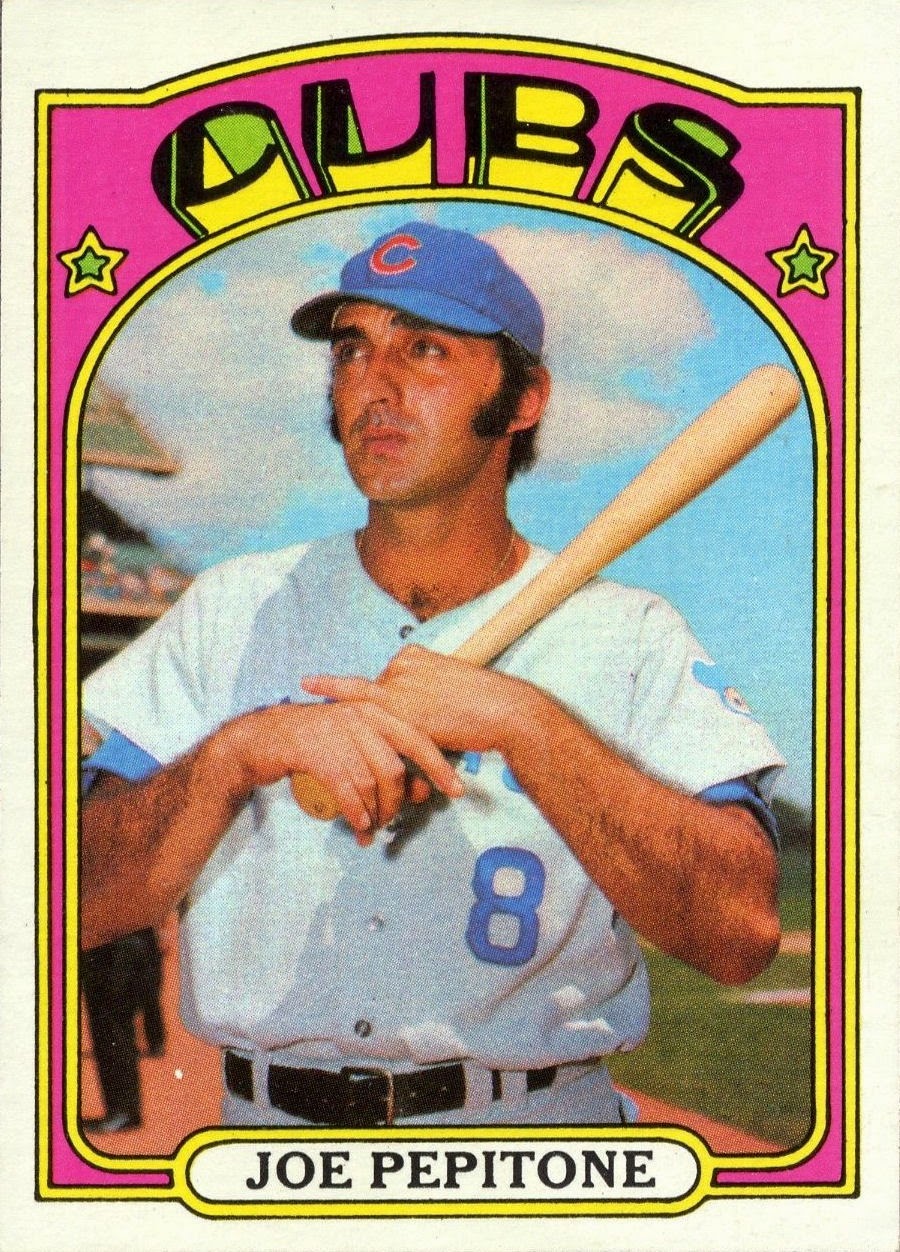 Without the benefit of inserts, Topps had to get more creative than usual.  They upped the set count to a whopping 787, their largest to date and even for almost another decade into the future.  Printed in six runs, Topps finally utilized all of their 792 slots by eschewing double printing of player cards, although their extra printing of each checklist from the next series with the prior would continue, hence the five "open" slots to bring the count to 792.

In actuality, they had abandoned their prior practice of "lagging" each series on the corresponding press sheet to create seven series over only six sheets in 1971.  Their use of true double printed rows of cards on each press sheet enabled them to do this.  1970 was the last year with a 7th series and it may have become too much of a bother for them to keep doing this as they still had to get out seven series worth of packaging updates, promotional and sales materials, instead of only six.

In 1972, just like the year prior, the first press sheet, corresponding to series 1, would also include a 2nd series checklist. This practice was followed through the fifth press sheet, which contained the 6th series checklist along with the 5th. The sixth press sheet in 1972 does not have any checklists as no further series were to come. Topps did this to preview the next series and stimulate sales.  Sneaky, sneaky....and also the last year a true high number series was issued as 1973 used only five press sheets to issue all 660 cards, which were also released en masse is some areas. And if you don't have the full run, you know how tough and expensive the 1972 highs can be compared to the rest of the set.  If you collect football from this year, the high numbers are even more ridiculous.  Topps clearly was scaling back their last series cards in both sports in '72.

So with 781 numbers to fill out, or over 32 numbers per team, Topps had to really put some thought into their 1972 set.  We'll get back to them momentarily but the first thing they did was issue 72 "In Action" cards, which replicated players but utilized game action photos. 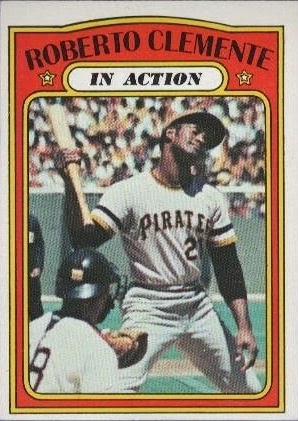 These were likely culled from the many unused action shots taken for the 1971 set, the first to feature on field play instead of posed player shots. The backs of the "In Action" cards had various graphics.  Some advertised what was coming: 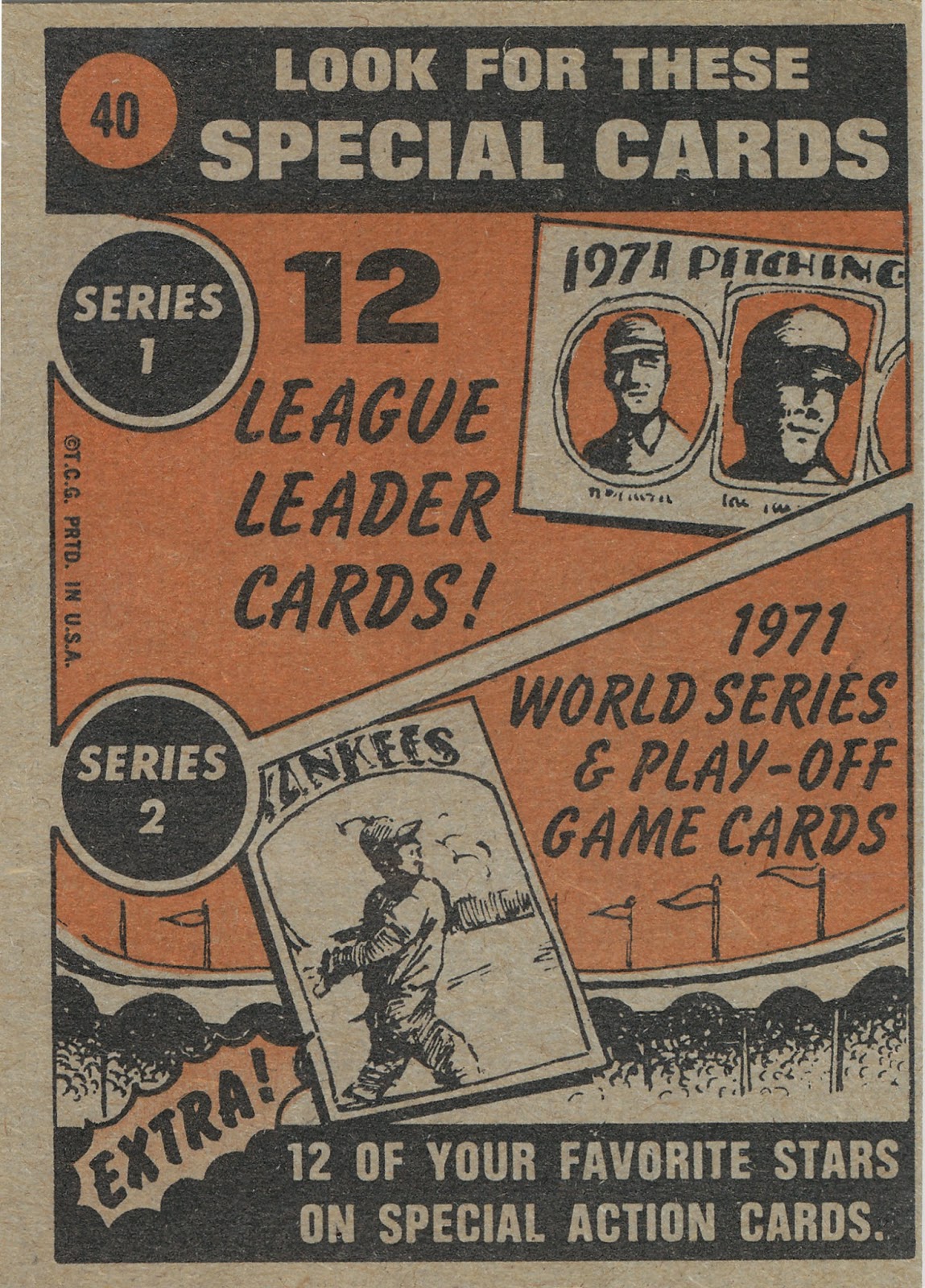 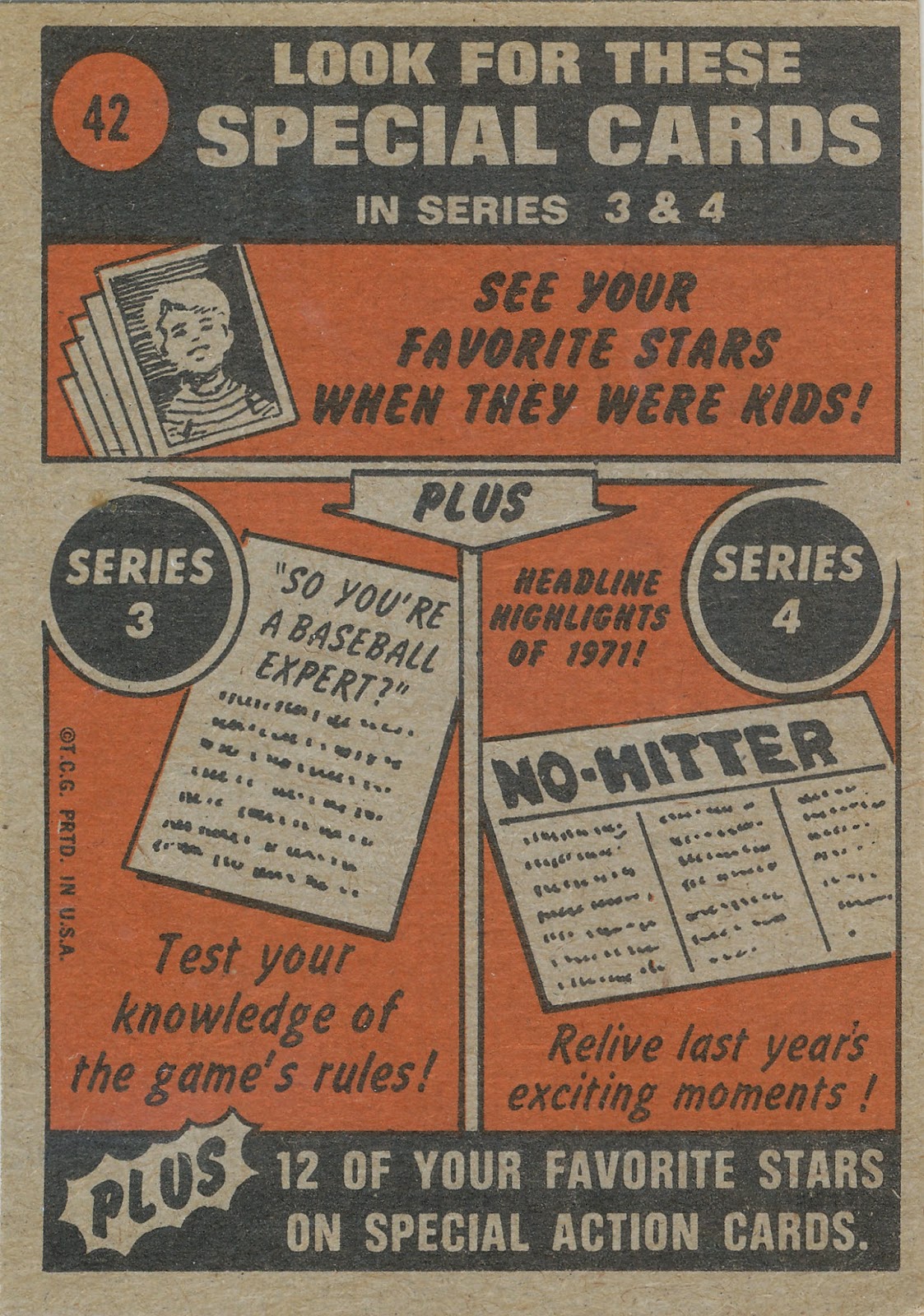 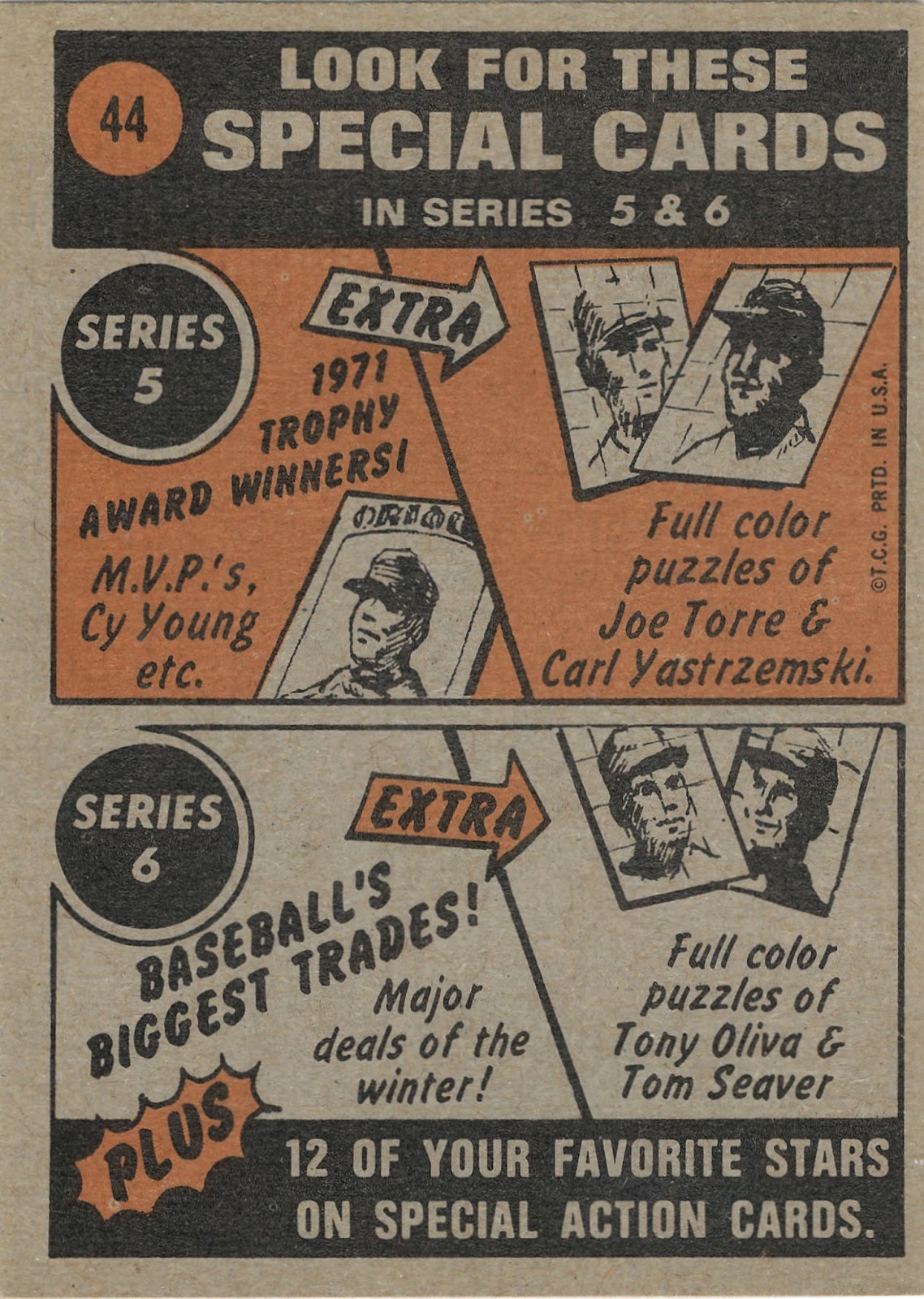 As noted on the cards above, there were the usual league leader and playoff/World Series cards, which took another 21 slots but those Series 3 and 4 special  cards were only writeups on the backs of the "In Action" cards.  Ditto the puzzles in Series 5 & 6.  Then you have a team card and at least one rookie card for each franchise.  Still not enough?  Let's put 7 Traded cards in the high numbers (ever notice they only issued traded cards in even numbered years during their heyday?) and then the ballyhooed "Boyhood Photos of the Stars", 17 in number. 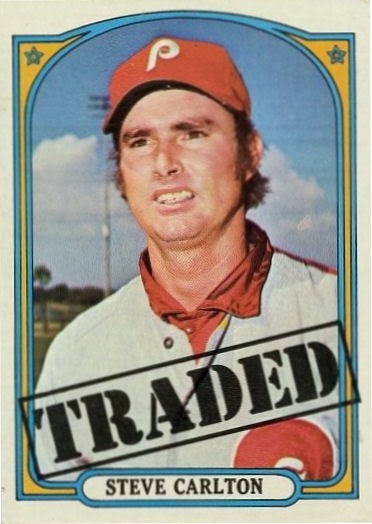 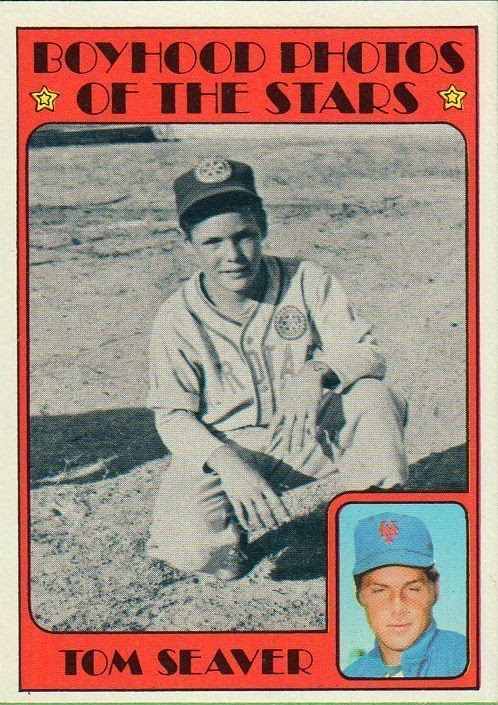 Well, six more slots must have needed filling because Topps included a half dozen of the strangest cards they ever issued, namely the "Awards" cards in the semi-high series. 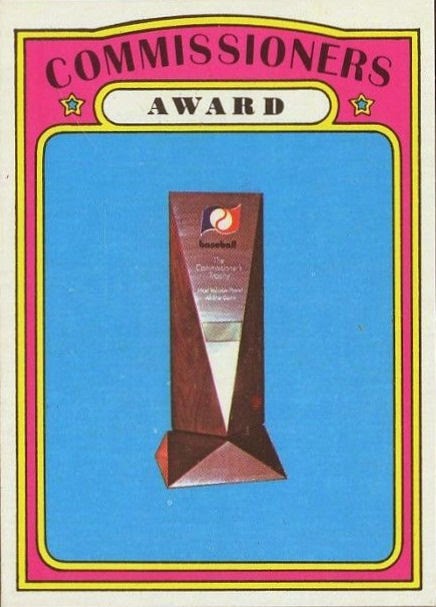 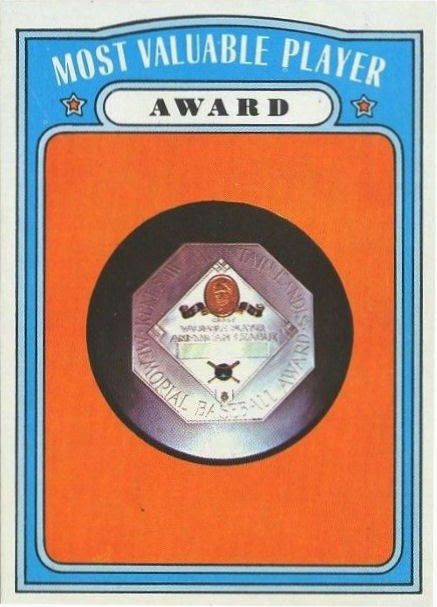 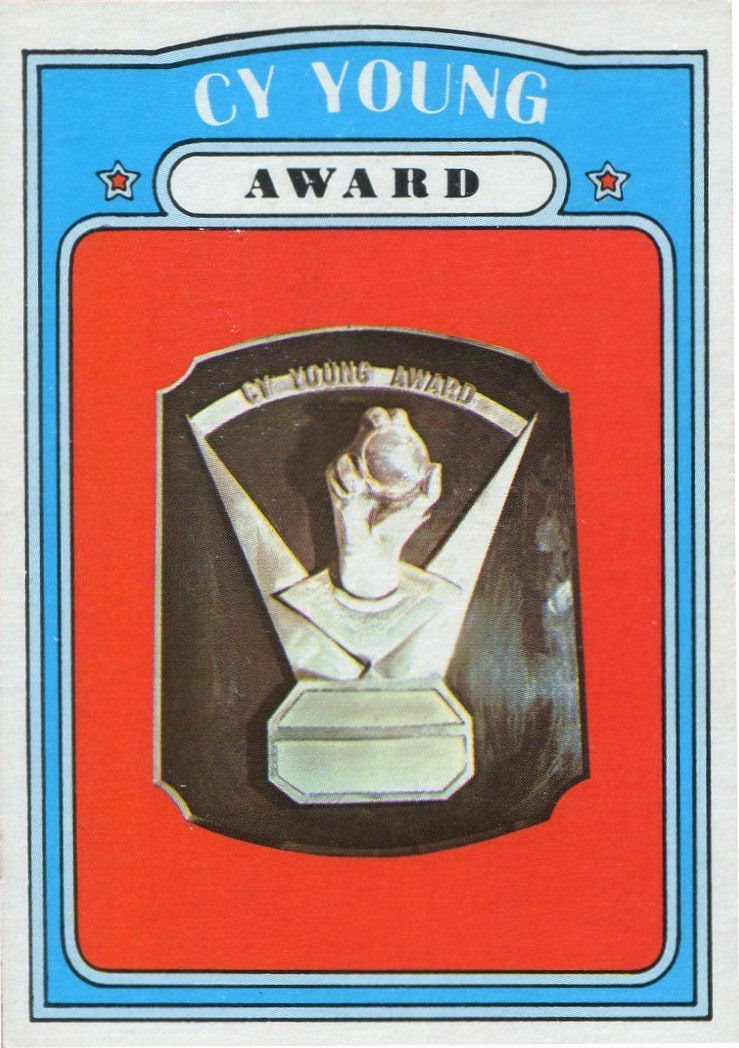 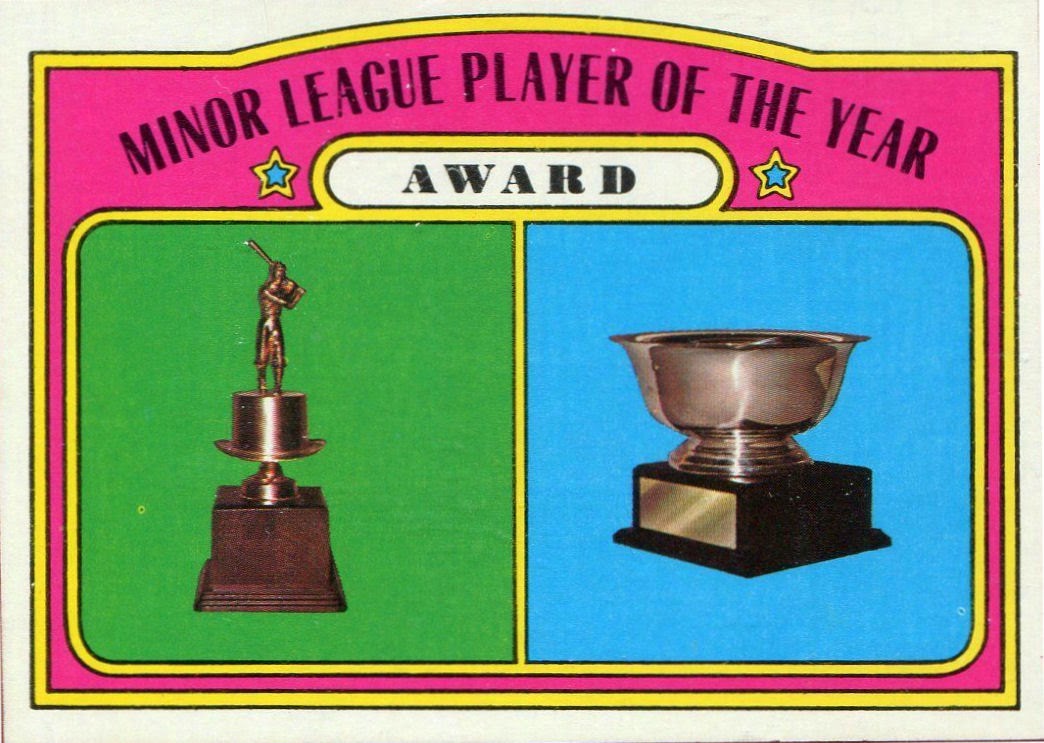 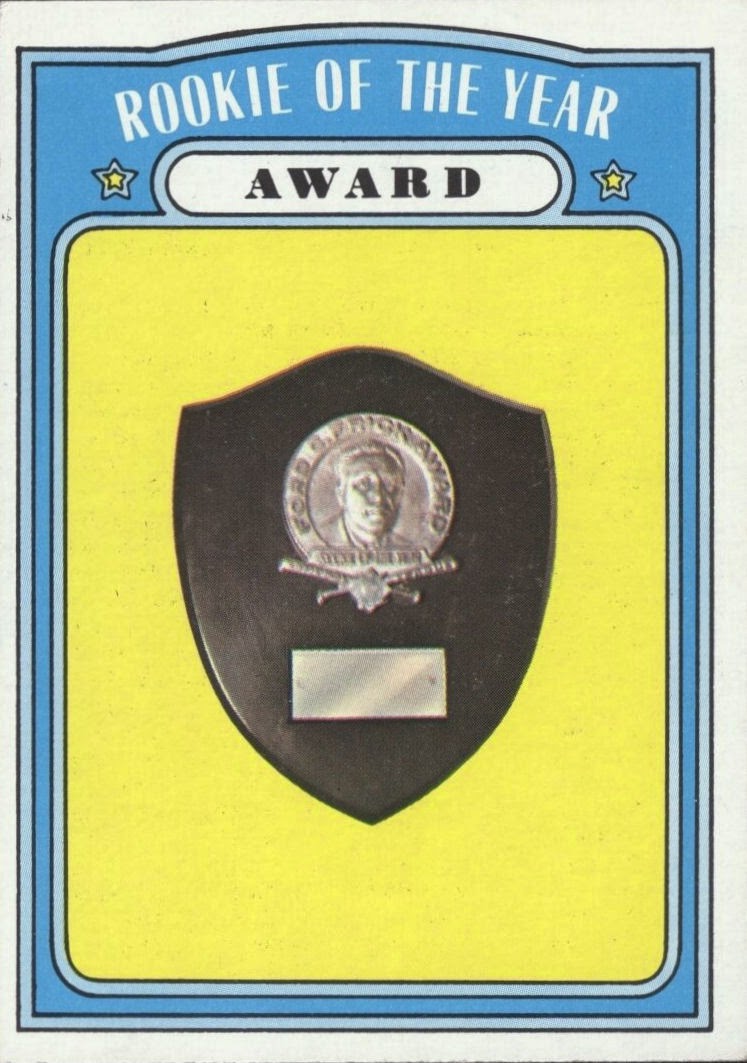 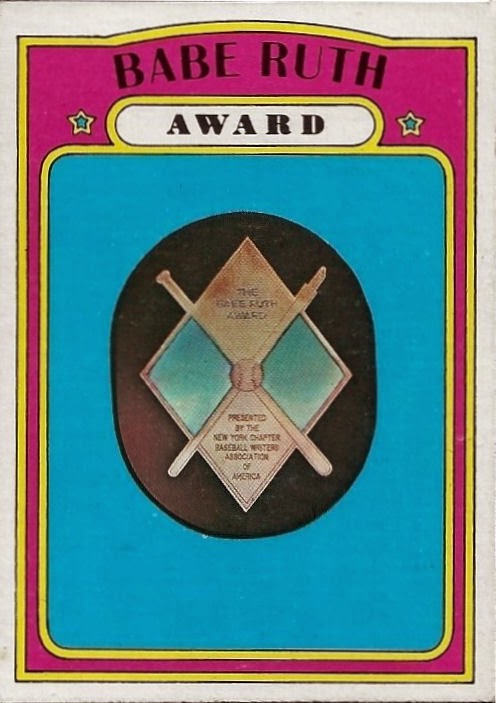 As a kid I was fascinated by these award cards, although they were treated with disdain by pretty much everybody else at the time. Today, they are not too popular except in the graded card set registries.

I'm going to call it here-this is the last great baseball set Topps put out.
Posted by toppcat at 7:08 AM