License Plate cards must have been a big deal in post war America. TV, that popular new gadget, was sending forth an electron beam awash with car commercials as Detroit was entering a golden age so it's no surprise that Topps would issue some cards showing license plates. They liked it so much they issued three different sets in five years!

The 1949 set has been covered here recently. I'll post scans again but you can read all about it on the prior post, just scroll down a bit. As you can see, you had to scratch off the coating on the back to "Name This Car". A small white border surrounds the license plate on the front:

The 1950 set is a bit larger than the '49 version and a black border has been added to the obverse. There are still 100 cards and the scratchoff feature remains. Note the new registration sticker too: 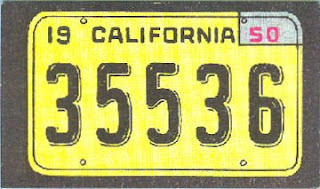 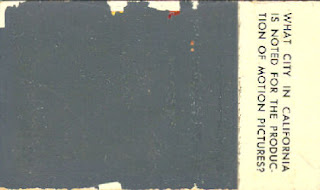 The 1953 set was reduced to 75 cards even while the size of the card grew yet again and was more international in flavor. Alas, my example is from the US but Topps spanned the globe in '53. The border is white but since my Arkansas plate is too, it's impossible to tell. You'll just have to trust me. 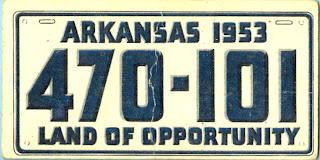 Now ordinarily you would need a mirror to see the answer on the back of the 53's. But here at the Topps Archives, we want you to have the best blogging experience possible and have handily done the heavy lifting for you; no need to schlep a mirror over to your monitor:

How do these measure up?

It's probably easier with a visual: 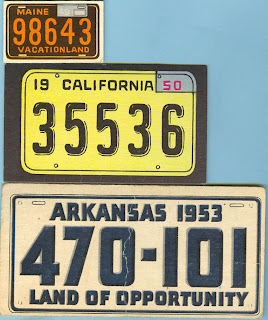 There are more nuances to these sets than I have time for now, especially in 1950. These are neat little cards, well worth checking out on your own. The fact that in 1949 and 1950 you only needed five digits on the plate is quite amusing these days.
Posted by toppcat at 7:13 PM