I've picked up a few more Topps retailer premium certificates and it is clear there were numerous varieties of these issued over the years. These were first discussed here, not too long ago. Note the "gams" back in the original post, it seems pretty common. 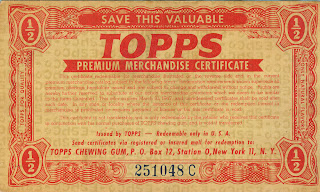 The reverse has some household goods and a pipe available but suggests looking at the Premium Merchandise Folder for more goodies. 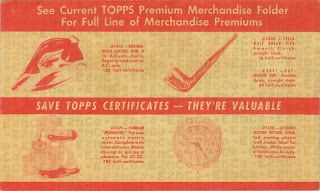 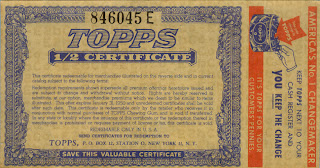 Here's the one I showed last time, for comparison: 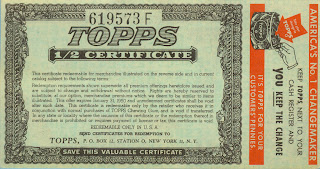 Interestingly, certificates were issued without the little sidebar. I thought this one might have had it cut off, or that maybe perforations had been used but it just seems like it's a "shorty", otherwise it looks mostly like the others of this ilk. It is also possible the sidebars disappeared around mid 1952 (1/31/52 expiry on the one below) as Topps started to concentrate on bubble gum and not mint gum. The Bazooka branding is becoming more prominent by now. 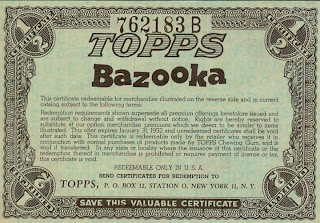 Also of note is a smaller certificate, printed on appealing (not) salmon colored paper. It too has the "gams" back. Bazooka grows in stature yet again (1/31/54 expiry): 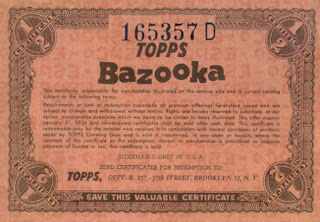 I am beginning to think Topps could not produce anything without introducing a variation or two.
Posted by toppcat at 1:24 PM

Just picked up some green ones just like the red one