The early 1960's were an incredibly creative time at Topps. They were putting out great sets in every line and creating killer inserts to boot. They even established a meme of sorts in 1962!

The expansion of the American and National Leagues in 1961-62 opened up or expanded four major league markets and with Fleer pushing hard to compete Topps was coming up with little extras to differentiate their offerings. They inserted stamps into the baseball packs and marketed their first real supplemental set since 1956. Baseball Bucks were a 96 "note" set of faux currency sold in penny packs: 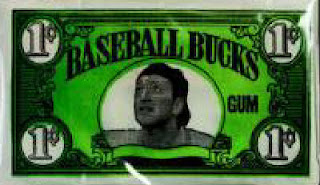 Given the difficulty I had finding a pack scan (the above is from a recently concluded Ebay auction) it can be assumed the bucks did not set the world on fire. I also wonder if penny packs were really popular at this point as well since Topps phased them out entirely across all lines in 1965.

Topps Vault sold a proof box a couple of years ago: 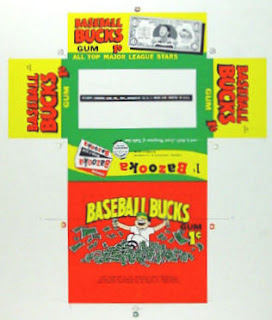 The bucks, which measure roughly 4 1/8" x 1 9/16" (sizes, cuts and horizontal orientation vary a little) had to be folded to fit in the pack. Folds are generally found about a little to the right of the player photo. They also came into contact with the gum, which can cause some issues.

The design on these is fantastic! You could open up a pack and find one of three denominations (1, 5 or 10) and either and AL or NL logo on the reverse. The paper even feels a little bit like legal tender. Team logos were also a real cool touch, as was showing the team's home field on the front. You can find these fairly easily but good luck on the centering!

Here is a partial uncut sheet of 48 notes, probably from an REA auction a few years ago: 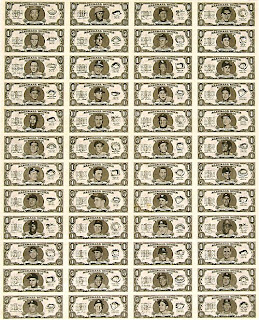 Not to let a good idea go to waste, despite likely lackluster sales, Topps created a 48 note set of NFL players (Fleer had the AFL license at the time) that were inserted in their 1962 football packs: 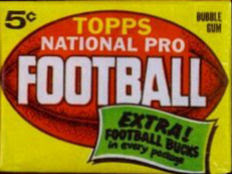 The design elements of the Football Bucks echo the baseball issue almost exactly, right down to the fold, miscuts, size and denominations:

These are harder to find than the Baseball Bucks but not all that tough to track down.

Topps did not issue a basketball set in 1962 but I'll bet they would have had Bucks inserts had they sold them. They did manage to halve the count again and create 24 Hockey Bucks inserts for the 1962-63 NHL season. Topps hockey cards were sold in Canada, usually coming out in midseason hot on the heels of the annual Parkhurst issue. 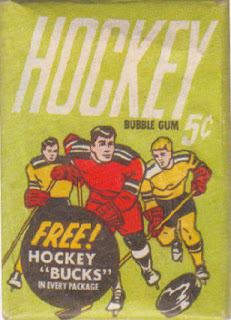 If you want to go broke real quick, buy some 50's and 60's hockey wrappers or packs. If you are tempted to open one, you will find slightly redesigned bucks:

The Hockey Bucks are difficult to find (the above two scans are a rare sighting from Ebay) especially in nice shape, which is true of all three issues. The only denomination on these is "1" for some reason. Size is similar to the baseball and football issues and well centered, untilted examples are probably more myth than reality. I am told the Hockey Bucks quite resemble the Canadian currency of the time, which makes cents.
Posted by toppcat at 8:03 AM

Thanks for sharing. If I only had UNE dollars ?

I have a 1962 topps bucks unopened wax pack that ia graded....I cannot find how much it would be anywhere....anyone who can help me my email address is markus2575@aol.com