Text in the City

In the pre-Bazooka days, penny gum tabs were the gateway confectionery item for Topps. Regular readers of this blog may recall they looked like this:

One of the things I try to figure out when idle is what the first Topps cards (or inner wrapper) were. Not to horn in on Todd Riley, who will have a killer Non Sports website up soon, but he has the only two scans I know concerning the subjects of this post. At some point the inside of the outer wrap became a fortune cookie of sorts:

Not really all that imaginative but interesting all the same and a worthy candidate for #1.

Very basic as well but a possible candidate for first Topps insert card was also text based:

Yes Sir That's My Baby was a movie released in early August of 1949 and I would think this little card was part of a series issued in the summer of that year. The bigger question is when did this type of release start? So far as I know, these Mini Movie Lobby cards are not catalogued.

Of course, the first insert may not have been a card: 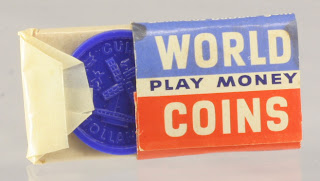 Yes, I am repeating myself a little but at some point feel like this will be figured out. My opinion at present is that the text based releases and using third party plastic coins would have been an easy (and cheap) way for Topps to issue inserts while they worked on other sets such as X Ray Vision and Magic Photos. However, Magic Photos could certainly pre-date the Mini Movie Lobby Cards if the latter only appeared for the first time in 1949. Based on this sell sheet, there was at least a six month head start for Magic Photos. 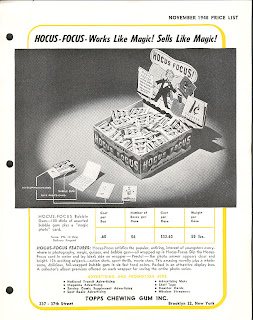 If anyone has other lobby cards, I ask you to send me scans as they can be dated quite easily.
Posted by toppcat at 8:11 AM

Email ThisBlogThis!Share to TwitterShare to FacebookShare to Pinterest
Labels: 1948/49 Topps