Topps would use a variety of media to advertise their products over the years. In the World War 2 era, matchbooks were a simple and inexpensive way to gain exposure. Back when smoking was not taboo, I would think you could pick up a Topps matchbook at any candy counter or drugstore where Topps gum tabs were sold.

This one advertises their popular "changemaker" tab:

There are few different varieties of these but the above example is encountered often. Topps likely had a matchbook for each specific mint flavor in its main line. Here are two I found just searching on Ebay; Pepsin and Cinnamon would also have starred on their own covers. I am not sure if the Fruit tab would have been advertised as I suspect it was marketed more with children in mind than adults but it would not surprise me either if there was a corresponding matchbook.

When it came time to market some "ammoniated" gum, the design department got all panoramic:

Probably the most famous ad Topps ever put on a matchbook was created by Otto Soglow. It didn't take much more than a clever copywriter to morph "Loose lips sink ships" into this:

The catchphrase "Don't Talk Chum, Chew Topps Gum" was well-known back in the day. This example is hand dated July 18, 1944 on back, noted by a matchbook collector of yore I'm sure. There are some variations on all of these matchbooks I think; I have seen a variant of the Soglow cartoon, I just don't have a copy of it. Life magazine (and certainly other periodicals) ran a parallel series, here is one of the ads from February 1944 (a hybrid public service message/advert). You can find out more on these ads here. 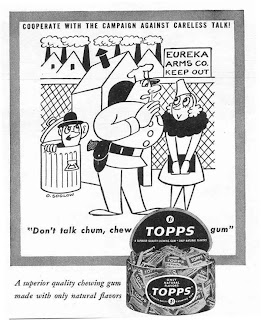 The focus shifted a bit after the war ended and our returning fighting men had other, ah, concerns. The first one is a detail from a larger poster or possibly was designed for a print ad; Soglow is stretching out: 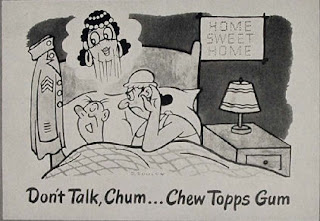 The second one shows an entire ad. Oh, you kid!

Those two are from an auction house called Period Paper, they have some really awesome stuff!

While digital imaging makes things like this blog possible, I am starting to feel nostalgic for how life used to be. Someday there will be no such thing as words printed on paper. What will an earnest archivist do then?
Posted by toppcat at 6:53 PM

Really cool post. Never thought about the variety of ways Topps advertized their products. Thanks!