Hot on the heels of last week's episode, I dove ankle deep into the archives and pulled out some Super Football shots. Topps managed to insert a psychedelic "glossy super" card into the 1970 football packs and also found time to issue a stand alone set of thick supers akin to the 1970-71 baseball issues in '70 as well.

The inserts are a crazy cool kind of set. This Floyd Little card sums the entire 33 card offering up perfectly: 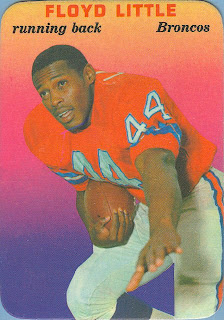 The colors on these cards are far out man, simply groovy! As you can imagine, this little set is a popular one with collectors. They measure 2 1/4" x 3 1/4" which is a standard size for inserts of this ilk in the late 60's and early. These are not necessarily called "super" by Topps but their reverse belies the lack of nomenclature in its similarity to the '69 Super Baseball cards: 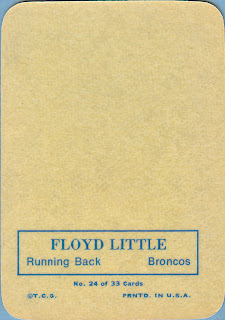 The backs tone a bit sometimes from their possibly virgin beginnings but that's OK since all the action is on the front.

The pop-artish small supers leave their larger brethren in the dust. Topps managed to avoid the obvious misfortune of not having an NFL license for a surprisingly long period of time in the middle to later downs of the last century but it's a pretty obvious play on the big Boy Super Football cards as we are presented with a set of 35 cards of football players without one measly hemet or logo making an appearance. Topps would not reacquire the license until 1982 so their Football sets for a dozen or so years were airbrush and head shot extravaganzas. The 1970 Football Supers measure in at 3 1/8" x 5 1/4", the same as their baseball brethren. 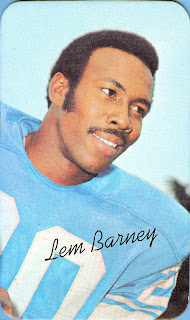 The backs are a bit sickly: 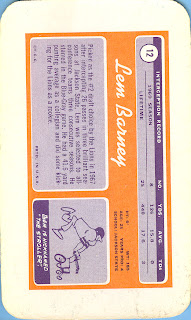 Cribbed from the regular 1970 football reverses, the supers left way too much white space around the borders. White was on Topps' mind in 1970 as the semi-snazzy wrapper for this set features lots of it as well: 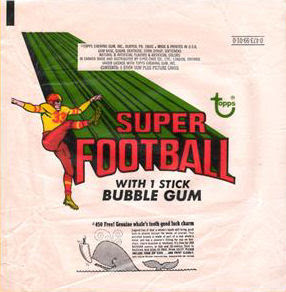 Had to snag that from Ebay as I am just barely getting up to speed adding wrappers to the archive. I like the whale though.
Posted by toppcat at 7:23 PM