Since baseball season is upon us, I thought it appropriate tonight to examine some... football stickers; specifically, with one exception, those Topps included in their retail packs in the 1960's.

Much like their baseball counterparts from this era, Topps marketed a wide variety of inserts with their football cards, due in no small part to competition from Fleer and Philadelphia Gum. I'll get to the non-stickered inserts another time, I'm fixating on the sticky ones only right now.

Perhaps the snazziest of all the sticker inserts is the first one, referred to as Metallic Emblems and issued in 1960. 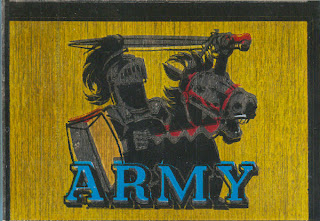 The cut on this sticker is unfortunately common and it seems more often than not these are found miscut. These are truly shiny and the 33 sticker set can be found with either gold, silver or blue backgrounds. I presume there are 11 of each color but that is merely an educated guess. These are smaller than a standard sized card at around 3" x 2 1/4". There are 13 NFL and 20 colleges represented. 1960 was a very interesting year for the NFL and the 13 teams are no typo.

A year later Topps issued what are referred to as Flocked Stickers, fuzz-like in nature and of a decided split personality. 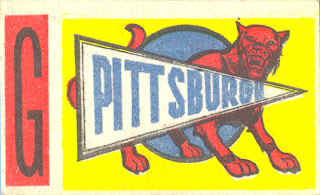 The smaller sticker component to the left carries on an old Topps tradition that dates to the late 40's, where Bazooka gum premiums consisted of letters and numbers so a kid could make his own jersey up. All 14 NFL and all 8 AFL teams were represented, together with a logo for each league augmented by 24 college teams. Some variations in the smaller stickers (which are solely letters, no numbers were used in 1961) exist and a full master set would be 60 stickers total. These appear a little bigger than the Metallic Emblems but measure out at about 3 1/4" x 2".

Next up, after a nice series of Football Bucks in '62 (partially discussed here) and a measly red cello viewer in '63 (for an interactive feature on the card backs), 1964 saw a scarce issue of 24 Pennant Stickers. These were too large at 2 1/8" x 4 1/2" to fit inside a pack so they were folded. I don't have one of these yet, so had to nick this scan from Ebay:

The big Beckett football guide describes these as "glassine" so they must be fragile. Ironically, they would have fit in the "tall boy" packs issued in 1965! They feature only AFL and college teams. Topps only issued AFL cards from 1964-67 as Phildelphia Gum had secured the NFL license they once held dear.

The 1965 tall boys included a rub off insert, more on which somewhere down the road. 1966 was nutty due to the whole Funny Ring inserts, wholly unrelated to football at all but featuring a checklist in the regular set itself!

We now find ourselves in 1967 and the schizophrenic, yet standard-sized Comic Pennant Stickers: 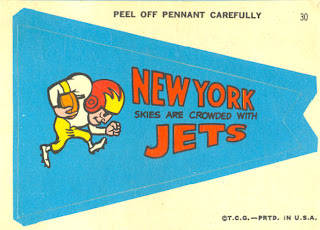 The odd thing about this set is a second version was allegedly issued without the die cuts and in its own packs. I am fishing around for more details on that oddity and will hopefully get some help down the road as the stand alone set is not well documented at all. All 9 AFL teams were represented plus some colleges and a couple of school-themed stickers, such as "Confused State". It is possible this set was pulled due to complaints over some of the sayings. Only 31 stickers exist, which is an odd number in the Topps universe.

1968 saw some nice Stand Up inserts and another standalone sticker set called Team Patches, which were the lead product and featured a team card insert, which will also be discussed another day as it is a popular issue and holds a surprise or two. These patches are tough to find in nice shape and this was pulled from Ebay: 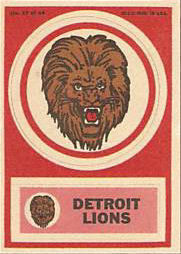 The stickers are standard sized but the team card inserts were tall boys. A very, very bizarre pairing if you ask me. Both NFL and AFL teams were featured in the set (26 in total, plus 18 stickers with two letters or numbers apiece).

We will close out our sticker extravaganza with those of the gummed variety from 1969. You had to lick these babies to get 'em to stick. Are they stamps or stickers? You decide. 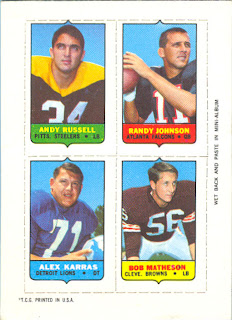 The 4 sticker insert is standard sized and there are 66 four sticker "cards", one of which repeats so 260 players can be found. There are a number of players featured in this set that are not in the regular football card set in 1969. These stickers were pasted into team albums that also came as inserts with the football cards: 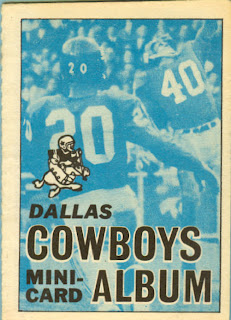 Each album has a team logo on the back. 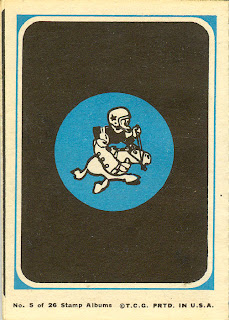 Check out the centerfold (a slightly different style was used for the interior pages). Each held ten, so the magic number of 260 could be reached. 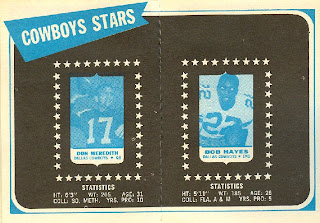 I remember having a 1967 Topps FB sticker that said

polluted
AIR
will
FORCE
us to wear gas masks