Back to one of my favorite Topps era's today kids: the late 1940's.

Way back in 2008 I posted about a few of the original penny pack Topps issues including a neat little offering called Play Coins of the World and identified as PX4 in the American Card Catalog. Recently a few came up on Ebay and showed that while the coins are well documented in theory, what they actually look like is another matter entirely.

You have to imagine how small these are; only 7/8" in diameter or just slightly larger than a nickel. Usually described as copper, silver or gold covered plastic which in turn represent denominations of 25, 50 and 100 respectively. 24 countries with three coins each should result in a full set according to most guides. It appears most guides are only partially correct.

Here is a closeup look at some obverses. Sadly, most are obscured in the recent auctions which is a pity: 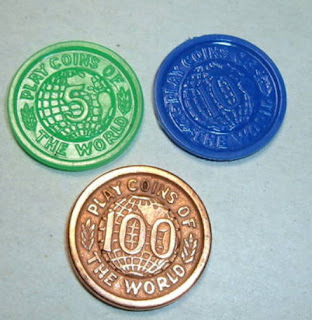 We have a gold 100 piece alright but also a green 5 and blue 10. There is a red color strain as well but I am not sure what denomination it is from the scans I have. This very interesting play money site lists a yellow 1 denomination but I have only seen those three colors so far. You can see the Play Coins Of The World depiction on each obverse. Pages 31 and 32 have these coins if you are digging deeper there.

Here are some more showing what I believe to be a copper and immediately below a silver coin.

Both metallized coins are French francs by the way.

The seller had a couple pieces of the box as well: 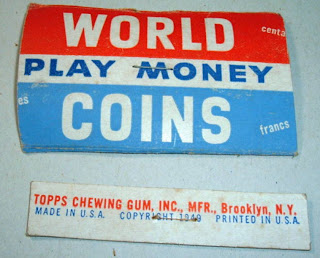 These coins were also sold in compartmentalized seven pocket strips with Play Money Pops as well, which were said to contain denominations of 25, 50 and 100. The lollipops were also a Topps product. Based upon the illustrations in The Sport Americana Price Guide to the Non Sports Cards 1930-1960, it appears the metallized coins came with the pops. Penny packs of gum would have almost certainly just come with plastic coins as the wrappers would have torn with the heavier, metallic versions lurking within.

So what is the final set count? If there are indeed 24 different countries there could be as few as 72 (24 x 3 colors) or as many as 144 (24 x 6) colored, plastic coins (1,5,10,25,50,100) but Topps advertising indicates 120 (24 x 5) coins were to be issued, which could be a reference to the plastic versions. Does this figure of 120 include the 72 metallized coins? I have no good grip on how many plastic coin denominations were issued and the ad may, even more confusingly, refer to the Play Money Pops. More scans are needed.

Also, I believe the first coins came out in 1948 and then were issued into 1949 in penny packs. Play Money Pops would have been issued around this time as well. An interesting Net54 thread is brewing on these and more scans can be found there.
Posted by toppcat at 6:23 PM