I have no idea why this esoteric little issue popped into my head tonight. Preparing for a totally different post, I instead present to you a short look at the delirious 1968 Topps Wise Ties.

Originally planned as a set of 24, 12 Wise Ties were issued. These were produced in Hong Kong and are described at felt-like but it appears they were printed on thin plastic. The ties measure about 9 1/2" inches by 3 3/4" inches at their tallest/widest point, featured pithy sayings with "disgusting" looking artwork. An elastic band served to secure the tie around one's neck and to my mind could have led to the product being puled from the marketplace due to a potential strangulation risk. One would assume Topps had learned their lesson the year before with their Blockheads issue but I guess not.

The ties were sold one per pack for a dime in a bright red wrapper envelope:

These were very hard to find before a 2001 find made them a little easier. The find consisted of nine boxes (from a carton of 24) and was auctioned by Legendary: 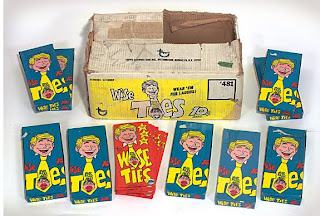 The find of 108 packs was assimilated and now these are tough to find again; the full case held 24 packs of 12 ties apiece so presumably one set per box was possible but I doubt that was the case.

I could not find a scan anywhere on the WWW so had to borrow from Chris Benjamin's Sport Americana Price Guide to the Non-Sports Cards (Vol. 4 Edgewater Book Company, Cleveland, 1992). Sorry for the b&w:

These may have been a Halloween issue like the '67 Blockheads set. I am unaware of any Topps product from the following year, 1969, that was designed to maim or injure little children but will keep looking!
Posted by toppcat at 6:49 PM

I have four opened packs of Wise Ties and am thinking about placing them on Ebay and wondering what they are worth?