Come Fly With Me

Ah, the heady days of the Jet Set: Sinatra swingin' on the radio, cocktails clinking and exotic destinations beckoning! Even Topps got into the act, with their 1956 Jets set, a 240 card ode to flying machines. The small black and white cards, as we know, were sold with Trading Card Guild overtones and an album was made available for easy storage and display.

Legendary Auctions just concluded selling a whole bunch of 50's unopened boxes and one lot had some great shots of the cards, packaging and albums. The box has been shown here before but this is a classic look at some prime unopened cellos: 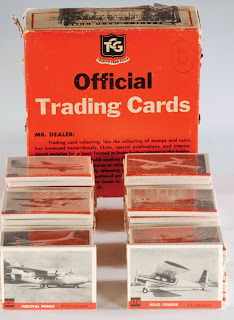 Normally that red and black box would have held 36 packs of Giant Size cards but due to the smaller dimensions of the Jets cards, 62 cellos were contained within.

The albums were sold for 15 cents each in 8 count boxes: 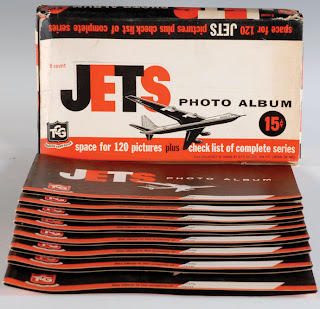 So the artwork for the cello boxes was actually on the box for the albums! Each album held half of a full set (120 cards) so 30 cents were needed for the entire run of 240 to have a nice home.

Here's another look at the album: 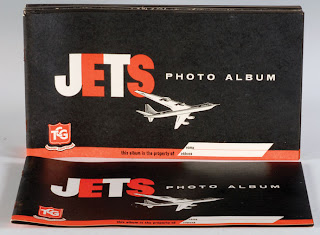 Neat, huh?! The cards were also sold in two types of penny packs, one repeating the look of the box art , which to be fair to the Guild, was prominent on the penny and nickel packs and boxes. But another penny pack was issued called Fighting Planes, giving a militaristic look to things. I can't find a good scan of that pack at the moment but stay tuned as I am feverishly gathering all sorts of scans from the 40's and 50's of anything to do with the smaller Topps cards. I'll add it here when I locate it.
Posted by toppcat at 7:02 PM

I used to have a handful of these. I sold them, unfortunately.