We ended with a spy spoof last time out so today will pick up with a serious spy show sort of by way of a cheesy doctors show from '62 before moving on to other realms. As everybody over the age of 40 knows, the 60's were a great time for spy and adventure flicks, primarily due to the tensions of the Cold War. A lot of TV shows tried to cash in on the James Bond phenomenon but The Man From U.N.C.L.E. was the only one aided by Ian Fleming, who penned the Bond novels. Do you know what U.N.C.L.E. stands for? Answer below!

While first season, 1964-65 was shot in black and white, the pilot was produced in color. The card set has a 1965 copyright date but was issued in 1966, after the show had switched to color. Why this was a black and white set is puzzling to me unless it was somehow delayed prior to issue. We will get to scans of these momentarily but first let's hit the wayback machine.

The U.N.C.L.E. cards are readily available and use a stylized front that as far as I can tell originated with the Dr. Casey & Kildare cards in 1962 but was really ramped up with the issuance of the three Black and White Beatles sets that were rushed out in post-invasion 1964. The common thread in these sets is a B&W photo, usually glossier than a normal card (but not always) and adorned with a facsimile autograph in blue.

Here is a fine example of the front style referred to above, which I fondly call Topps Black and Blue": 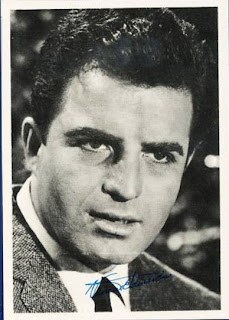 The reverse is also very typical of these style cards: 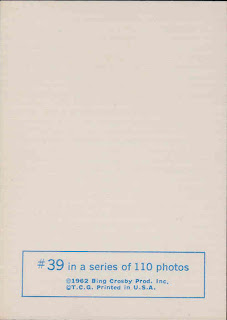 My operating theory is that the design used here originally was created to mimic a standard Hollywood portrait or group photo but once the Beatles hit the Ed Sullivan Show it was found to be perfect for pumping out a lot of product very quickly without worrying about any real design other than what was being shown on the wrapper.

Man from U.N.C.L.E. used the same style front as the Casey and Kildare cards: 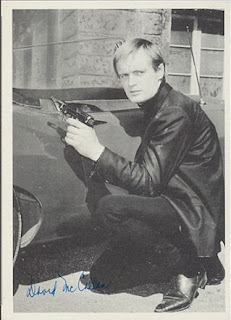 But the back was decidedly different, albeit a simple puzzle piece: 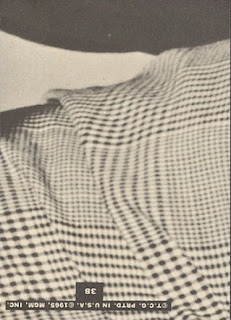 We also see this front on the Soupy Sales cards issued circa 1965 (there is some confusion on the date, I'll address that momentarily): 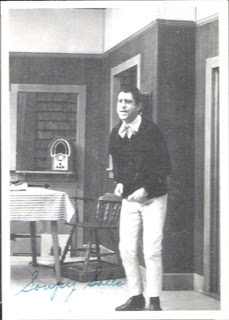 Another simple back for ol' Soup:

Now there is a color Soupy Sales set as well, that is quite scarce: 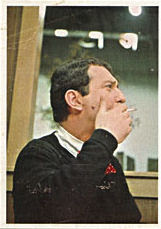 Yes, Soupy is smoking a cigarette on a bubble gum card! The backs of the color cards are blank and indicate they were only early proofs: 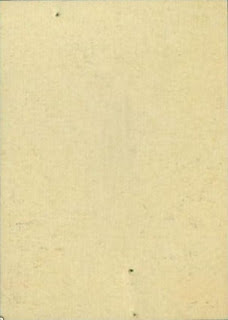 Some sources have the color cards being from the end of Soupy's second national run in 1967 (he had a show in the late fifties and early sixties and would even manage to star in yet a third nationally broadcast show in the late 70's) and this date has turned up a couple of times in my research for the B&W issue but I believe the latter to be from 1965. The Soupy Saga will be looked at in detail here sometime as there is a lot more to it than what I want to get into here.

1968 brings us for some bizarre reason, a B&W set commemorating the show Julia, which I remember very well but it still disappeared very quickly after three seasons, much like these cards which are scarce: 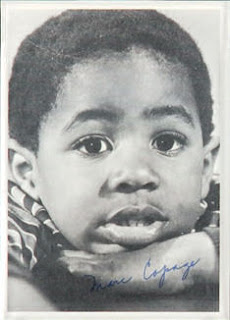 Once again, the simple tried and true information block back presents itself: 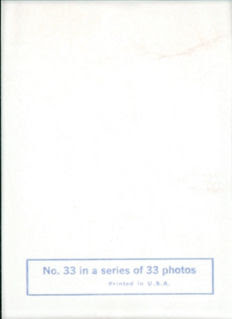 Room 222 had a solid run on ABC, premiering in 1969 and eventually becoming part of ABC;s powerhouse Friday Night block of programming, which was de rigueur kid viewing in our household in the early 70's. There is a twist though, blue has turned to black in our autograph: 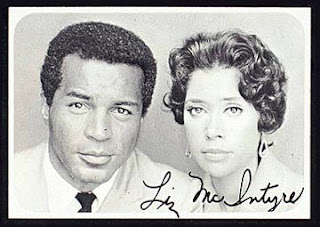 The back is partly puzzling: 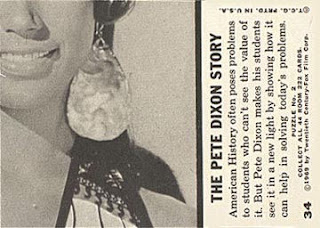 Topps did come up with an identical color version though: 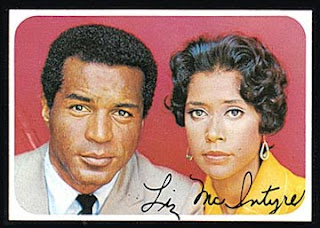 And I mean identical: 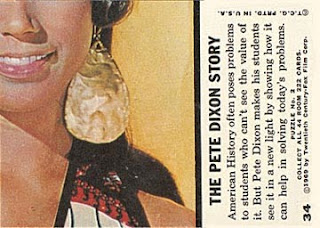 U.N.C.L.E is an acronym for United Network Command for Law and Enforcement by the way!

Our look at the B&W 60s cards will conclude next time out-see you then!
Posted by toppcat at 6:39 PM

Hi there, Any more info on the 1965/1967 Soupy Sales series? Were there two sets, or one set without dates? What's going on here?

Not really sure yet but I think they are different sets, unlike say Room 222.