I've been having a bit of a think about the unissued 1953 Topps cards I covered here a little while back. As we all know, there are six holes in the 1953 Topps baseball set, with the operating theory being the players were pulled from distribution due to contract disputes with Bowman.

Well, sometimes the obvious solution is right before you and you miss it; I suspect I may have done that with the paintings used to create the cards by not considering the glue residue stuck to their fronts. The three paintings from the Autumn 1981 Baseball Cards magazine collage I showed previously are obviously candidates but I think only two of them have glue remnants in a pattern on their surfaces: Castiglione and Cox. The Pafko looks like it has a stain in the middle of the card but I pulled the magazine article again and it looks more like a water stain to me, rather than glue.

So take a look at these two: 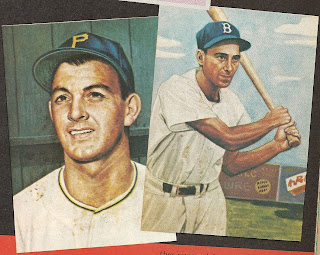 If you look closely along the bottom of each, you can see the geometrical glue pattern:

The Cox pattern is harder to see in the scan but it's definitely there and runs horizontally across his thighs and, uh, junk. Castiglione displays an L pattern which is pretty easy to see. Note how the glue residue is not running along the edges of each but is more in the middle. I suspect this was the result of a mask that Topps used in photographing or copying of the paintings so they could be pasted up and printed.

Now look at this detail on the Pafko painting: 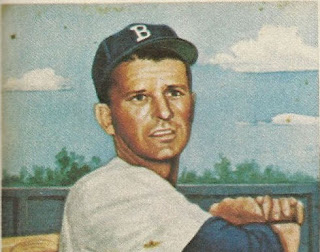 Foxing around the edges and a water stain in the middle is how I read it; I could be wrong of course but the stains don't really match the other two. Now look at these four (Ashburn, Brecheen, Lanier and Tipton), from last time, all clearly with a glue pattern present: 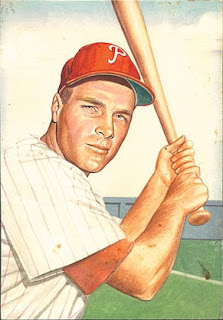 here is a close up of the right side of Rhichie's painting, you can see the glue pattern most clearly a little bit to the left of the right border:

Brecheen has clear remnants, very much so: 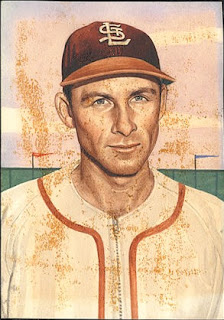 It's almost the opposite of what you would expect, I wonder if the process used to remove the mask caused all that muck swirling around his mug?

Lanier is another clear glue clue: 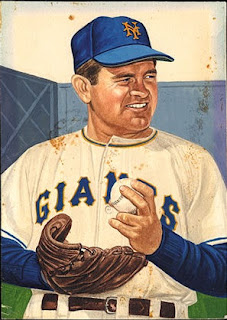 And then we have Mr. Tipton: 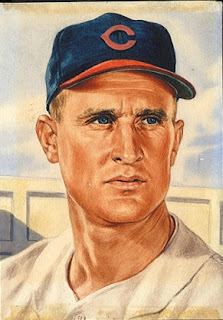 Top and bottom look very clear to me.

We also had the unissued Wood card (click back to see) but it's clean as a whistle so I suspect it was never introduced into the production cycle.

Some of the HOF'ers from the Guernsey's auction in 1989 (again click back for a look) looked very clean and were obviously made into issued cards but I understand those were stored separately from the Berger stash and it looks like they were recognized as "keepers" by the Topps brass even way back in the 50's. And I have to wonder if Pafko was pulled and replaced by yet another card that was pulled. Still, the glue that holds this thread together may be the same stuff used by Topps fifty eight years ago! So are these the true missing six?

I think it is very, very possible.
Posted by toppcat at 10:22 AM