Get It In Writing

Well it's official, the scanner here at the Topps Archives Research Center has officially given up the ghost. So it's back to plumbing the depth's of the ol' hard drive for the next week or so, until a new machine gets purchased and installed. It's not all for naught though as this will give me a chance to show some very vintage material that will segue nicely, one hopes, into an upcoming article I have in The Wrapper that delves into the Topps backstory (more on that as we get closer to publication kids).

Once again, here's some scans provided by Friend o'the Archive Jeff Shepherd, this time of some very early Topps Chewing Gum Stationery that shows just how little money was being dealt with right around the start of World War 2. 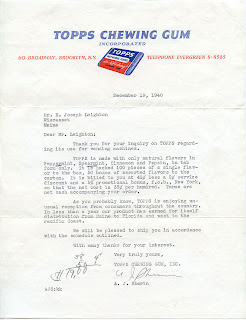 Yes, 38 cents for 1 box of 100 tabs of gum from Topps in 1940! It was all about volume of course but that type of figure was quite common at the time. That Abram Shorin signature by the way, looks secretarial to me and not of his hand.

Mr. Leighton, of Wiscasset, Maine did not not act quickly enough and just over a year later the price had gone up by a penny: 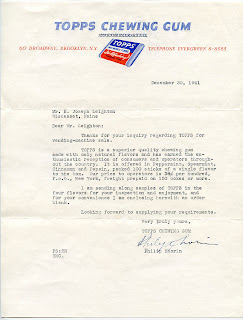 Like his brother's, that Philip Shorin scrawl was most likely penned by someone from the steno pool. Things were looking up though, as Topp's paid the freight on orders of 150 boxes or more. I am not sure why they were unincorporated at this time, after having been a true corporation just a year earlier. Fodder for another post!

The gum tabs were not something being marketed to kids just yet. The vending machine trade referred to in the correspondence was primarily focused on taverns and tobacconists as the primary selling point of Topps Gum in 1940 would have been to mask the offending odors of liquor and smoke on a gentleman's breath before he trundled on home to the missus. There were also very utilitarian point of sale displays being used. You can get a good idea of the type of display the gum was being sold out of by looking at the graphic on this Topps envelope:

There was another counter display that I'll get into another time that was much smaller, just a little tub, but the vending machines and open displays of the 1940's were meant for counter-tops primarily. These small vending machines are sometimes referred to as column vendors: 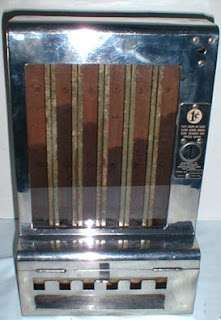 Now, I am not certain if the little gum tabs that had cards inserted were sold in tubs or just in column vendors and in columnar displays. It seems like the cards would fall out if they were just loose in a tub.

Here's the back of the envelope to close things out tonight-note the Christmas Seal: