In addition to their popular "Changemaker" gum, in the early 1940's Topps also sold a candy bar dubbed Opera, which was a chocolate covered marshmallow confection. The origin of the name is a little murky as there was a much older product with the same name that featured two flavored fondant fillings but whatever its beginnings it was one of the first Topps products.

In anticipation of World War 2 sugar quotas, Topps began buying smaller candy companies and, as the story goes, began shutting them down and keeping their upcoming alltoments. However, in 1943 Topps bought a company called Bennett-Hubbard in Chattanooga, Tennessee and decided to keep their plant running to make candy.

Here's a wrapper from what might be their first confection made in the Chattanooga
plant: 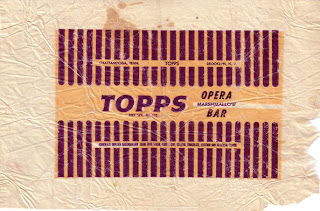 I nicked that scan from the awesome Candy Wrapper Archive by the way. I originally though the wrapper below came first but the black bar at the upper left would have been utilized by a later cutting technology I believe: 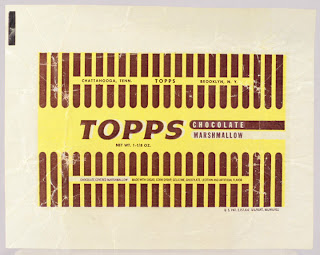 Topps closed the Chattanooga plant, which only made candy, in the early 1950's and the The Opera bar does not seem to have survived any much longer either. I have to say it looks like it might have been pretty tasty!