It's A Marshmallow World

"Mairzy Doats" was a hugely popular song that became a national sensation after it was recorded in late 1943 by Al Trace and his Silly Symphonists. You can read more about the song here but its release date helps us date another candy bar produced by Topp's' southern plant in Chattanooga. 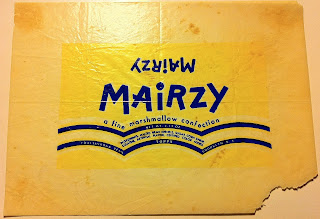 In addition to very possibly being the most heinous candy bar wrapper ever devised, malted bran kernels and marshmallow do not exactly bring to mind lip smacking goodness. No matter, marshmallow was a wise choice for a product in 1944, when I presume this bar came out in the wake of the song's popularity. Marshmallow requires far less sugar than ordinary candy filling and products using the air filled morsels would have stretched the scarce supply available for manufacture during World War 2.

I doubt the bar lasted much beyond the end of the war but who knows? Candy bar wrappers of the period seem far harder to locate these days than gum wrappers so it's hard to get a true read.
Posted by toppcat at 7:39 AM