Perhaps the Summer of Love vibes were strong enough to reach Duryea, PA in 1967 but the Comic Pennant insets that came in that year's football packs were enough to make one think some banana peels must have gotten mixed into the Mac Baren at Topps HQ  How else can one explain the downright groovy sayings that adorn this 31 subject insert set?

Here is a prime example of one of the team oriented cards-note how the snarky saying is wedged in there: 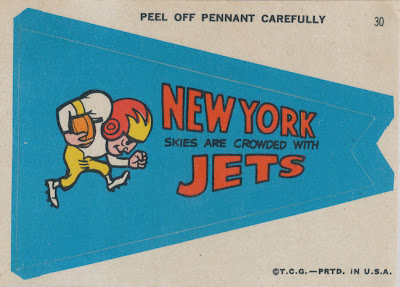 The back is pure period tan sticker back: 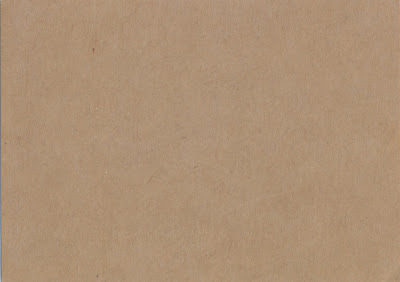 We'll come back to the back in a minute. Topps only had AFL rights in 1967 so the nine teams in the league such as Oakland -- "(Fat People in) Oakland (are Usually Icebox) Raiders" -- were rounded out in the Comic Pennants with a couple of college-themed stickers suck as "Notre Dame (Hunchback Of)" and a whole lot of amusing and borderline offensive sayings such as "Down With Teachers" or "Nutstu U."  There was also a "Confused State" and my personal favorite: 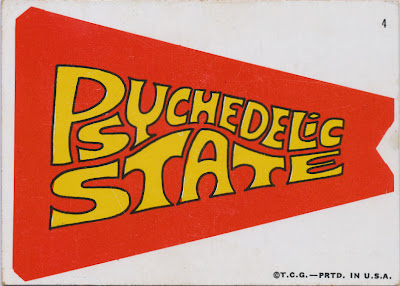 It's hard to tell but that is actually a card and not a peelable sticker.  Look at the Jets sticker and you will see the score line where the sticker was meant to be peeled.  The card version is also lacking the "Peel Off Pennant Carefully" line.  The back of the card sure look sticker-stock-like but it's cardboard and not the usual tan backing paper: 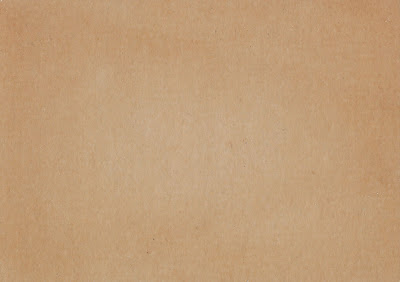 To make matters even more confused, Beckett states that there is a style in "adhesive form with the pennant merely printed on card stock".  Well, if true that makes three types but I am thinking they thought the cardboard version had a sticker back, hence the, ah, confusion, but maybe there is a third version.
The stickers were allegedly withdrawn due to their outrageous sayings, which theoretically accounts for their scarcity but it is possible the short, 132 card AFL set also did not remain on the shelves all that long.  Yanking the stickers would seemingly make another type of insert necessary and there is no other option in '67. The stickers do seem offensive in many respects and I am thinking two could have been pulled prior to distribution (33 would be an expected set count for standard-sized stickers) so it is possible I guess but definitely not a given. The cardboard version is also stated to have been sold on its own; no pack exists to my knowledge but it could have been a fun pack item in such a scenario.
Posted by toppcat at 7:35 PM

I have 2 of these stickers. One is:


polluted
AIR
will
FORCE
us to wear gas masks

Hey Topps, how about making these (or an updated version) into a new insert set!