It's Just A Jump To The Left

I'm starting to organize a bit of my post 1956 Topps scans now that my book project is behind me and came across a bit of a headscratcher.  I have no idea where these scans are from but somewhere along the line a 1957 Topps Basketball uncut sheet was auctioned. It's not a his-res scan so I can't blow it up with much detail but here is the front: 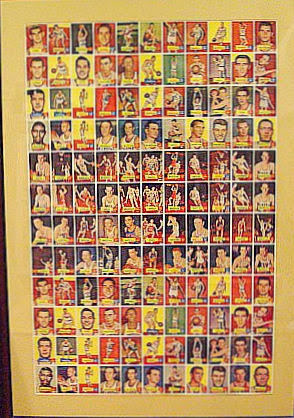 The first thing that jumps out at you is that the game action shots all appear to be in their own 44 card section and the more solid color backgrounds are segregated.  It's not quite true though as some action shots are mixed among the colors if you look closely.  It's also worth pointing out that this is an 80 card set and not an 88 card one, which would normally be how Topps would number things with this press sheet setup.  However, I believe that each of the eight NBA teams back in 1957 could only sport a ten man roster, hence 80 cards in the set (if they had added the coaches it would have worked out!).

So eight cards on this half sheet had to be double printed. If you look at the top two of the action rows you can see that six of the rightmost cards in them are double printed on this sheet, one version atop the other. Then go along the bottom row, third card in and you will see the other DP, again top and bottom (the pair is replicated up top as well, just harder to describe the location). So that is a quadruple Print (QP).

Six DP's exist then (12 slots) as well as one quadruple printed player (4 slots). The rest of the game action cards are Single Prints (SP) using that logic, leaving 32 SP's to make up the rest of the 44 card midsection. For these seven "overprinted" subjects 12+4+32=48 Slots. That leaves 84 slots, which works out perfectly (remember four slots of what would normally be 88 are taken up by the QP card) to 42 DP's among the two color sections. Since each color card other than the QP appears twice you can work the math a different way that yields 42 DP color subjects +6 DP game action subjects +1 QP subject +32 SP slots. (42x2)+(6x2)+(4x1)+32=132 cards.

Now this being Topps, there should be another half sheet where the action cards each have a 44 card section sandwiching the color cards but it seems that did not happen and each half sheet was the same. There is also a wealth of reference material on this set that has between 30 and 40 cards described as SP's and given the array of this sheet, the 32 SP's fall right in that range, all in the game action middle layer.

Now, for the other oddity. Take a look at this Carl Braun card I snagged from some eBay scans.  I cropped out the PSA holder but this is how the card was shown front and back: 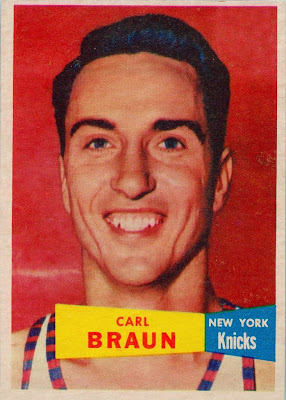 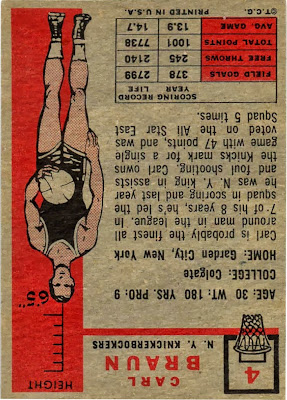 The back is upside down compared to the front!  Luckily the reverse side of the sheet is also on my hard drive: 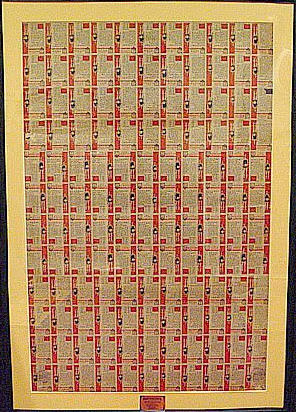 The color cards are on the top four and bottom four rows and you can see enough detail to know they are printed upside down while the action cards in the middle had properly oriented backs.  I have never seen Topps do this on standard sized cards, it's very strange for them not to align solid blocks of color on the whole of the sheet. 1957 was their first year of standard sized cards and 12 x 11 sheets so I guess they were working the kinks out.