I keep missing out on some eBay auctions of old Card Collectors' Company price lists.  It's not a huge deal as there are usually enough scans provided for the auctions that I can get at the information I want, namely the extant supply of scarcer Topps cards as each successive price list was issued.  There's also some ancillary information in some of these lists and one that definitely fits that bill is No. 10, dated March 20, 1959. 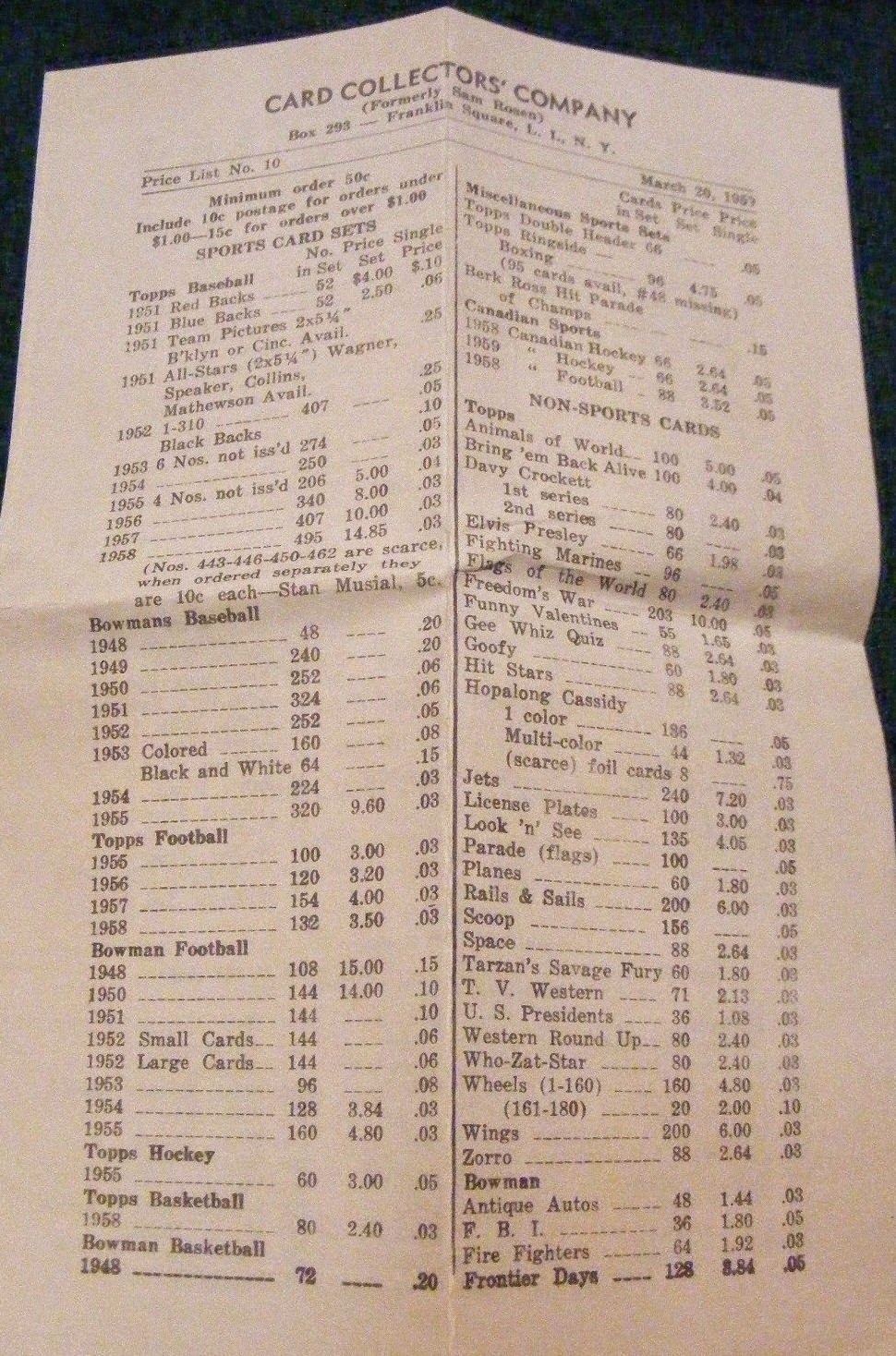 You will notice it states "(Formerly Sam Rosen)" at the top; that makes this the first CCC price list.  As it turns out Rosen, who was Woody Gelman's Stepfather, had passed on on New Year's Eve 1958:

I had his death date as 1955 in my book but clearly that was wrong.  You can click over to the book's update blog here or by clicking the link at the top right of this page.

That announcement is from another page that has quite a few interesting components: 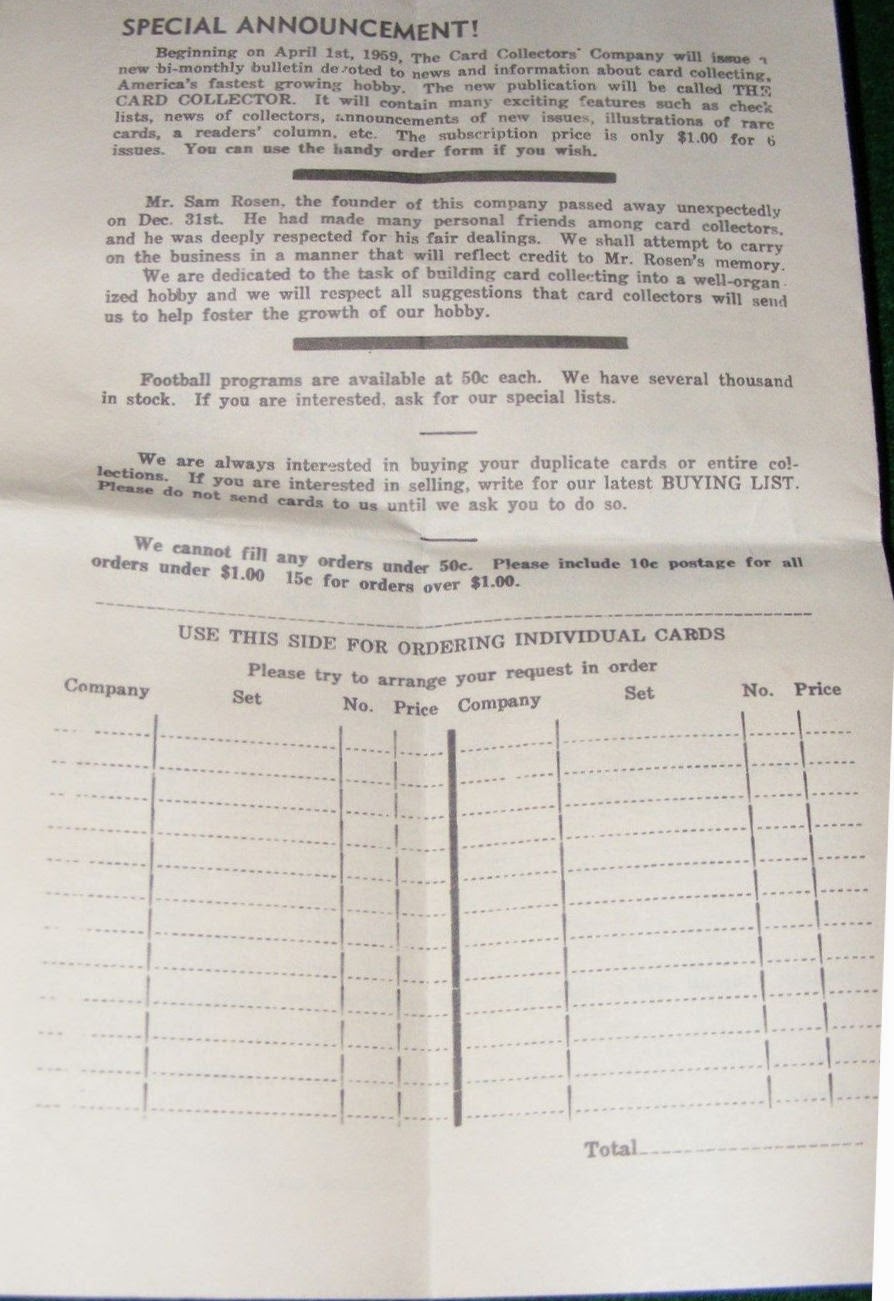 The first paragraph announces the formation of a collector's newsletter dubbed The Card Collector:

I'm not sure why it was decided to keep the price list and the newsletter separate, perhaps it was to avoid the appearance of conflict of interest. The second paragraph announces the death of Sam Rosen as shown above but there is more though. While paragraph three is a rather mundane sales pitch for old football programs, we see a buy ad just below it:

Rosen had a lot of inventory at the time of his death.  You can link here to an ad of his from a 1957 issue of The Sporting News and see that he advertised over 1 million cards in stock. 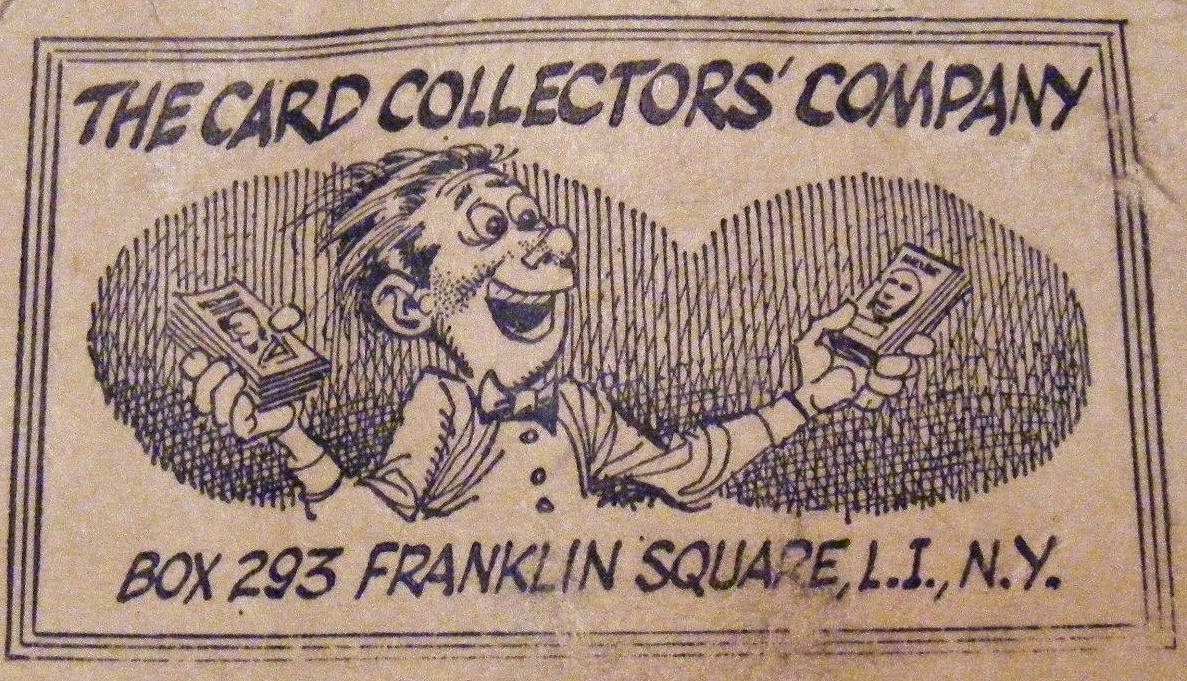 That is clearly some Jack Davis artwork that Woody scored.  If you clicked the link to the Sam Rosen ad above, you will see that mailing address changed from 110 West 34th St (Manhattan) to the town just down the road from Woody's hometown of Malverne, NY. The Manhattan address was almost certainly just a mail drop as I can't see a midtown rent working out when cards were selling for two cents apiece. That locale is just across the street from  Macy's and next to the (at the time) Gimbel's department stores and was (and still is) as heavily trafficked an area as there is in New York City, being just off Herald Square.

Too bad I missed out on winning this price list but I am happy enough to mine its riches even in defeat.