The odd and unique stuff that comes my way takes many forms.  In addition to my collecting goal of having one example from every set sport and non-sport set Topps put out from 1948-80 (and sometimes one of each subset), I also pursue pieces related to the company proper. A little while back I acquired two "sorts" used by Topps for printing their stationery.  One was clearly heavily used to produce letterhead for the company, the other turned out to be a red herring.  Here is the letterhead sort (a "sort" being the entire unit used to typeset something):

This sort was heavily used, as you can see and appears have a copper plate affixed to a lead slug which in turn is affixed to a wooden block.  Here is a mirrored look at it:

I'm reasonably certain this was used to produce letterhead after World War 2 as the italic "incorporated " was not used prior to the war (the font used back then was more like the main font for "Topps Chewing Gum").  I've got a prior look at some stationery here.

Here is a pre-war letterhead from late 1940, signed by Abram Shorin no less; you can see the fonts are similar atop the piece: 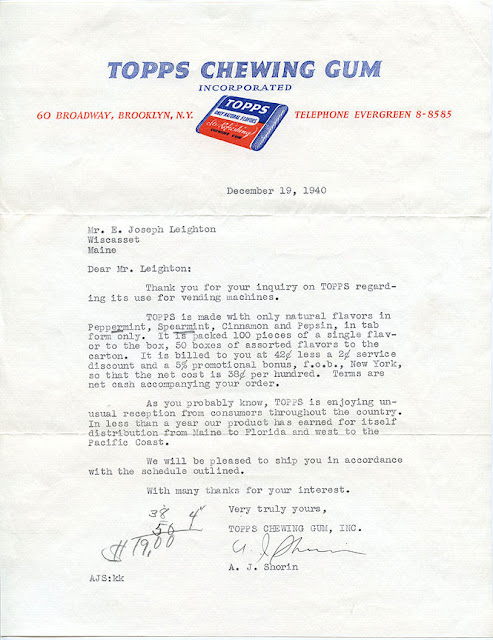 A year later Topps had unincorporated and took a DIY approach, this time for a Philip Shorin missive: 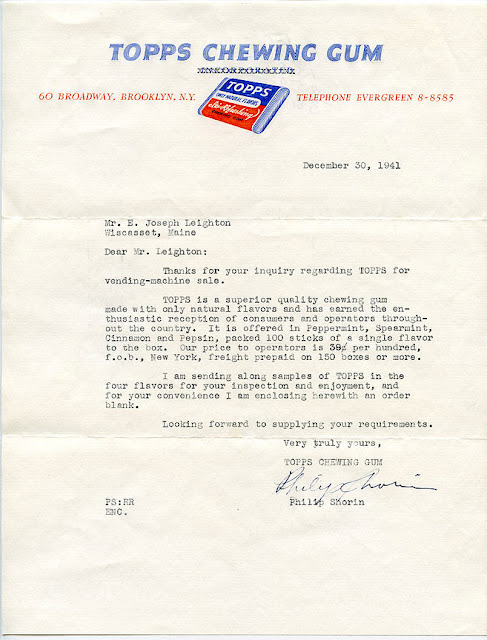 I'm not 100% certain but believe they unincorporated so they would not subject to as much scrutiny once the war started and sugar and other staples and goods needed for their business became regulated. Eventually they cleaned things up a bit once the old supply was exhausted: 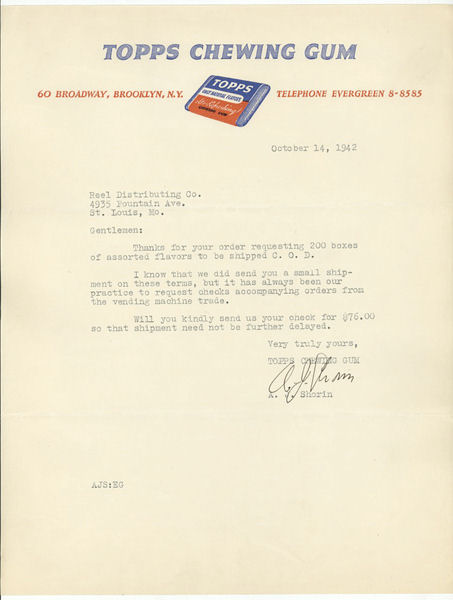 After the war the italic "incorporated" appears once Topps changed their ownership structure around 1947.  I would wager my sort was used to produce this stationery.  Other elements would be added as needed; the reference in the form letter below to pre-testing of Tatoo dates this specimen to 1948-49: 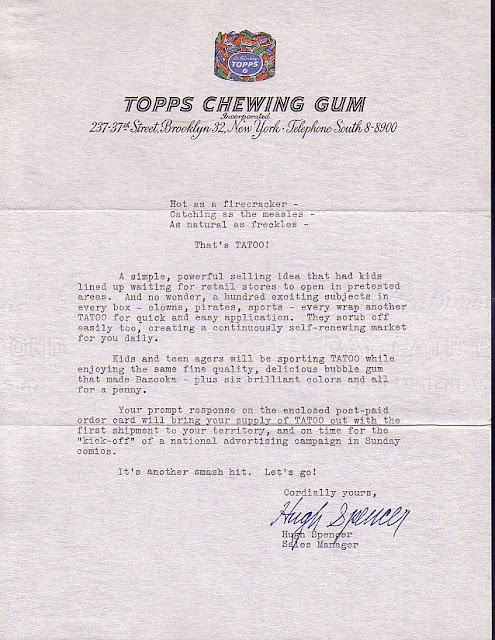 That's an interesting lead paragraph as it may explain why Tatoo has a different style wrapper in 1949 from when it was first released in mid 1948. Tatoo of course was the first Topps novelty item. I wonder if the text instructions were changed to semi-graphic after the testing (scale is off, the wrapper on the left is from the original issue and is the same width but a little shorter than the one on the right):

The famous Topps testing procedures were firmly in place from the beginning!

Just for fun, here is another form letter for the 1949 World Coins issue, better known as Play Coins of the World: 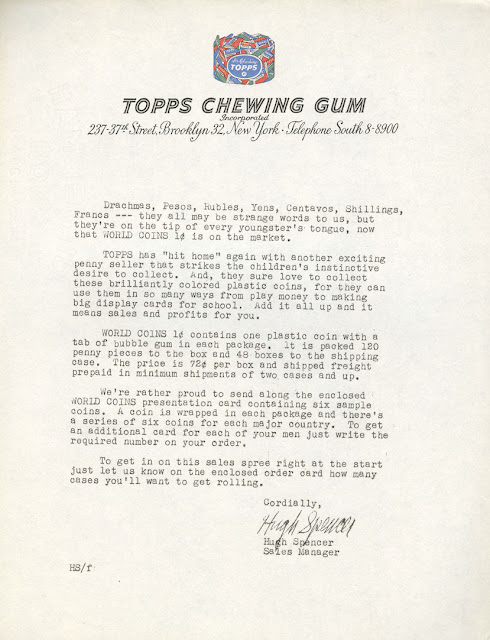 Sy Berger also got into the act: 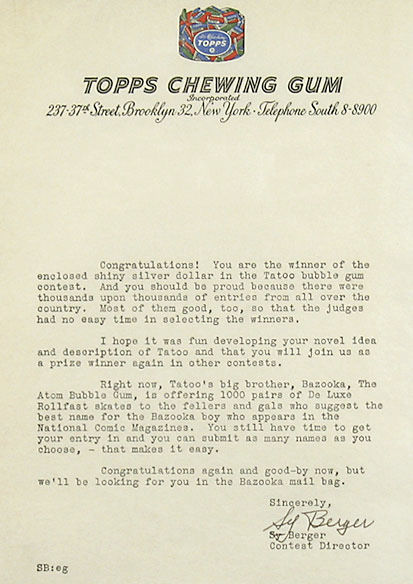 Sometimes the color element was omitted, as this 1952 letter shows: 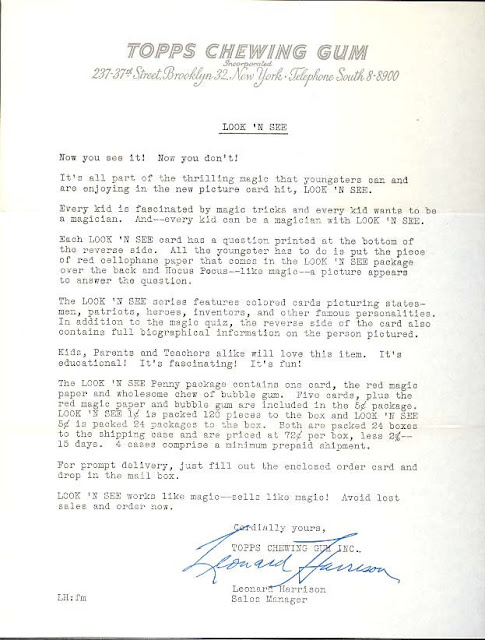 The "Topps Chewing Gum" was still using the same typeface for the company name in 1959 but "incorporated" changed somewhere along the way, which means my little slug had been retired: 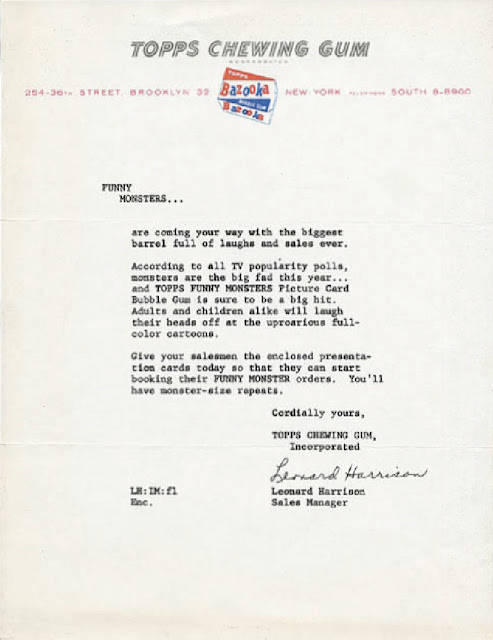 I don't think they changed to company name typeface until they moved to Duryea in 1966 and went with the much better curved logo.  Here is a stylized version from 1980: 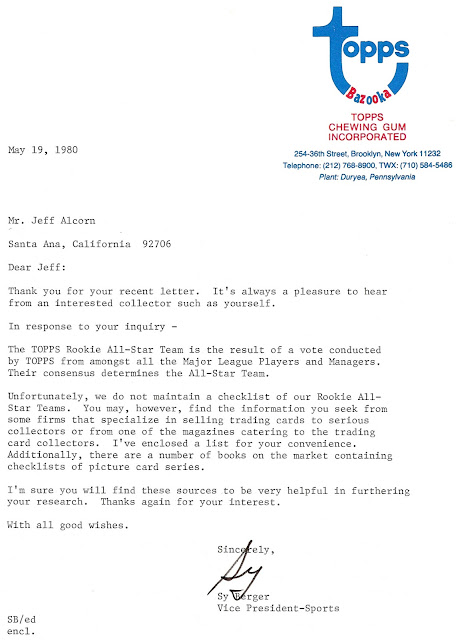 I mentioned the other piece I obtained had a twist.  Here it is, it is a heavy steel item, quite suitable for a paperweight, which is what I am using it as: 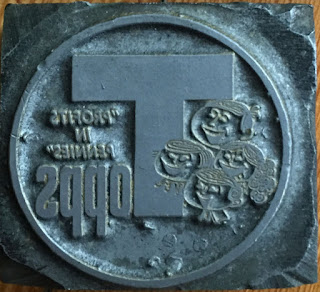 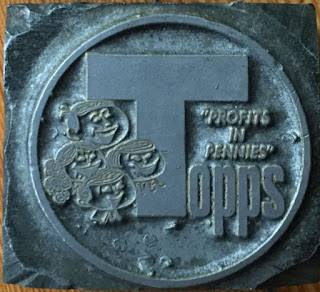 The kids, the "profits from pennies" all make it seem like it belongs to "our" Topps but after a little research I first thought it was for the old department store of the same name.  More research however, shows that a trademark was granted to a Topps brand of motor oil under a filing by Plymouth Wholesale Corporation in 1962. That trademark included the phrase "profits from pennies" so I guess this piece is unrelated.