Well the flow of cool and unusual Topps items just keeps on rolling....

Friend o'the Archive Justin Davenport has sent along scans of his Topps Award watch and I am definitely blown away.  Check this bad boy out:

Here is a close up of the dial; you can see the a small representation of the ubiquitous Topps Rookie Trophy in between the words "Topps Award": 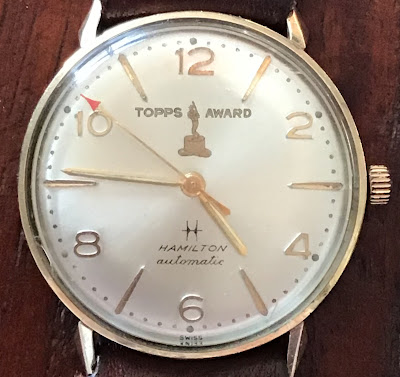 We know they gave out jewelry at the Rookie Awards Banquets back in the day but this is a little bit of a different beast.  The back reveals why: 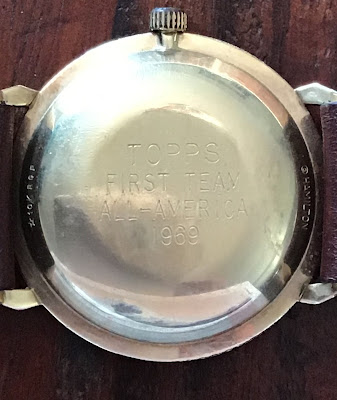 That says Topps First Team All America 1969.  So it appears the watch was given to the collegiate All Americans by Topps that year.  For the record, they were:

Most folks think of football when they hear All Americans but the awards are still being given out for baseball and many other sports each year.

That is one of the neatest things I have seen in a long time!

Email ThisBlogThis!Share to TwitterShare to FacebookShare to Pinterest
Labels: Topps All American Watch