As longtime reader of this blog know, I've been trying to track down one of the most elusive inserts Topps ever slipped into their packs for quite a while now.  I am talking of course about the 1968 test Basketball issue, a 22 card black and white rarity issued in minute quantities almost fifty years ago.

The cards are well known in vintage basketball collecting circles but not so much to the casual hobbyist: 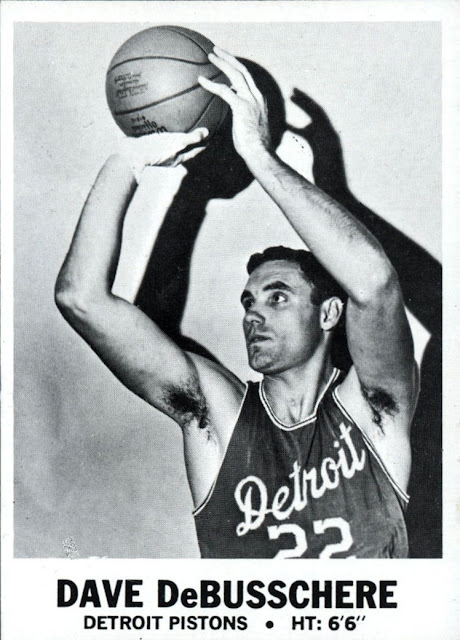 Just under 170 cards have been graded by PSA and the highest amount for any single player is 13 for Wilt Chamberlain. Pop reports can be tricky things, what with crackouts and resubs and the more common players seem to average about a half dozen examples each.  In my experience and opinion test issues from the 1965-72 era, sort of the golden age for such things, are available in direct proportion to how they were tested.

The test cycle went roughly as follows: 1) Controlled opinion and market testing in a lab, 2) field testing where Topps executives would actually hand out cards at schoolyards near HQ in Brooklyn ("here little boy, would you like some gum?"), and 3) retail testing where a couple of boxes would be put out in stores near Topps HQ (Cortelyou Road is a rumored location for such things). Later on, regional issues such as the 1975 Mini Baseball would occur and give us products with production runs well beyond anything that should be considered a test. Normally, the farther along in the test cycle a set went, the more cards there are out there to collect. Under ten wax boxes would be a typical run of test cards that made it to the retail level from what I can gather.

There is also another phase, that of the failed test where cards (or internal proofs never market tested) were dumped via Fun Packs (like Flash Gordon), or the Card Collectors Company (1970 Cloth Baseball) or by other means. My own opinion is that most black and white cards, like the one above and also quite a few other sets in the mid to late 60's, did not make it to a full retail test and were only handed out in the lab setting or never actually made it out of the executive offices.

So the 1968 Basketball issue possibly made it to the schoolyard phase but not the retail test to my mind.  Unlike almost all other test issues though, they came in an envelope and not a pack: 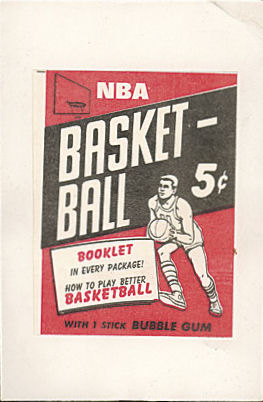 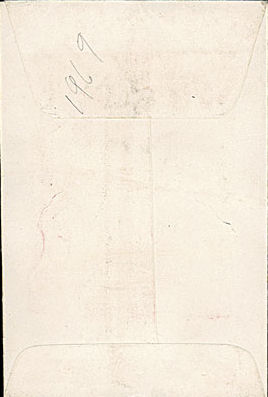 Ignore the writing, it's likely added after the fact.

Three things:  1) The gum may have been individually wrapped given that this was not a traditional wax pack; 2) the envelope measures about 3" x 4 1/2" -thanks to Friend o'the Archive Don Huse for the measurements- and; 3) nobody has ever seen the insert.

Well, as is my wont, I was trolling around the internet recently and found this: 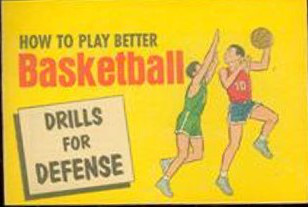 That is from this site:  http://www.vintagebasketball.com/home/category/booklets-food-and-drink/hood-cousy-how-play-better-basketball/ and it has scans of 11 other booklets. The site is semi-defunct but if you look you will see the webmaster attributes these booklets to a Hood Dairy issue in 1963. I have sent a message to the webmaster looking for details, especially measurements (remember the oversized envelope wrapper).  I have no idea if there is Hood indicia on the booklet but I could see Topps somehow getting a small supply of these and using them for the insert.  I'm guessing but it's the closest thing I have ever seen to what the wrapper advertises.

Update 1/25/16-See the Comments for a measurement of the booklet.  It appears that even if folded it would be to big for the pack on even its shortest side.  There is Hood indicia on the back cover to boot. Back to square one it seems, or square zero (no insert exists).

"field testing where Topps executives would actually hand out cards at schoolyards near HQ in Brooklyn ("here little boy, would you like some gum?")"

Yeah - how well would THAT go nowadays? School would be on lockdown and SWAT team would come in to pick up the 'perverts'.