Another month, another jaw dropping auction!  This time it's SCP Auctions and the subject is basketball, specifically 1948 Bowman Basketball.  The set is a landmark in the hobby and actually predates the NBA, showing players from the Basketball Association of America (BAA). Kicking off just after World War 2 ended in 1946, the BAA played three seasons before merging with the National Basketball League (NBL) in August of 1949 to spit out the NBA, casting off the weaker teams. This mega-merger likely came about because four NBL teams had jumped to the BAA for the 1948-49 season.  The 12 BAA teams from its final season are all represented in the Bowman set, so in addition to being the first nationally distributed basketball set, it's a great time capsule.

For the record, the 12 BAA teams in existence when the set was issued were:

As you can see, a couple of of the team names belie their owners' industrial backgrounds. I've linked to a site with some information on the Steamrollers, who had one of the greatest logos I have ever seen.

Anyhoo......The set was issued in two series of 36 cards each, with each team getting five players. Bowman snuck 12 "basketball play" diagram cards in to round the set off at 72. The high number series is tougher to find and the whole issue is a nightmare of condition sensitive cards and high value rookies (which obviously abound). Like the upcoming 1949 Baseball issue, the cards featured black and white player photos, slightly tinted with some spot block color added. Backgrounds were solid. Here is a classic example from the set: 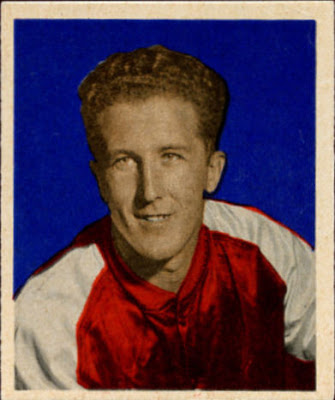 The cards were distributed in five cent wax packs and given the conventional hobby wisdom that the basketball set had the lowest production runs of any 1948 Bowman issue, you can imagine how hard it is to find any wrappers or packs.  Well, SCP has managed to snag an example of both in a recently concluded auction: 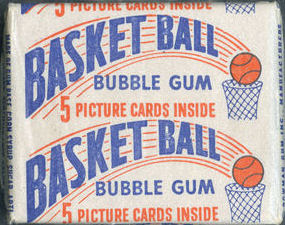 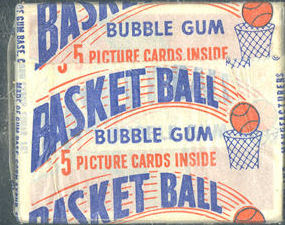 There's also a nickel wrapper, which I think is a bit mesmerizing: 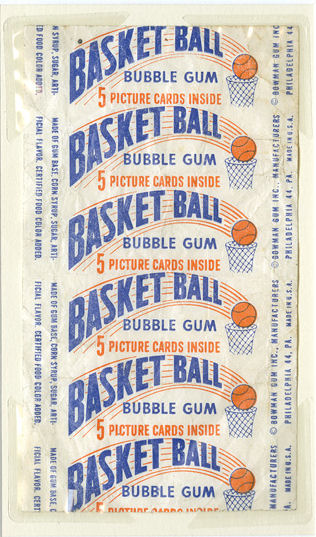 As if that wasn't enough, there is a partial uncut high number sheet as well, a 7 x 4 array: 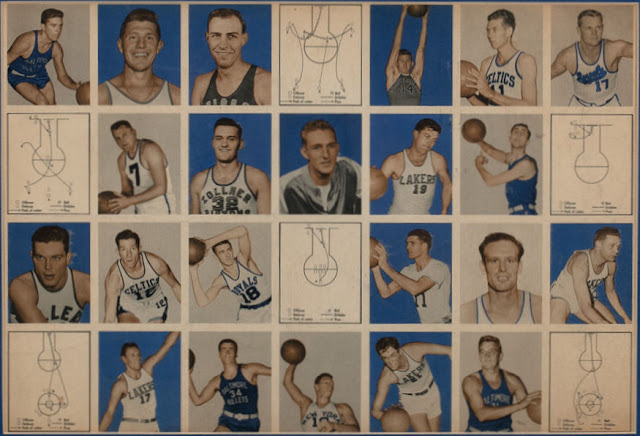 Mr. Mikan is there on the bottom row! And those slate gray backgrounds indicate the red process is missing from this particular partial sheet.

Like Topps, Bowman printed cards on much larger press sheets. A number of partial sheets from various Bowman sets, often in a 9 x 4 array (reflecting Bowman's penchant for 36 cards series) have shown up in the hobby over the years. These are mostly rejected press sheets (like the one here) that were bought up from print shop personnel by a paper dealer in Philadelphia in the 1950's. Bowman sets, much like those from Topps, were printed on larger press sheets.  The sheer number of partials that have 36 card arrays makes me think they were cut down this way before being sent off to Bowman for further cutting and packing.

I'll not show the full back, which reveals numerically sequential printing, but rather the six mostly-basketball themed premium offers on the back of the cards: 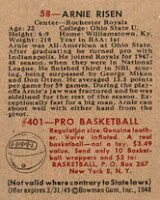 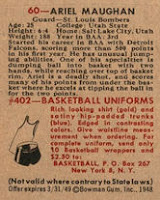 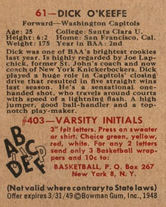 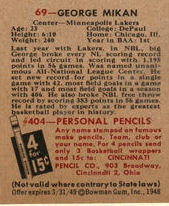 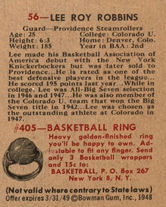 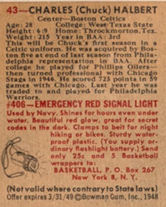 Again, much like Topps the premiums would have been fulfilled by a third party vendor or two. What a great little slice of Bowman and BAA history this sheet represents.
Posted by toppcat at 8:00 AM