Our multi-part series on the Topps and O-Pee-Chee Hockey sets of the 50's, 60's and 70's almost concludes today with a survey of the secondary, standalone NHL sets issued by both companies.

Unlike the US Baseball issues, where Topps was (sporadically at first) issuing secondary sets from the mid 1950's and tertiary sets by the mid 60's, it took until the early 1970's for the hockey market to see such wonders. Certainly the reason was economic.  Their main hockey mad audience was primarily in Canada, with roughly ten to twelve percent of the population of the US. Now I'm sure interest was higher as far more kids watched and played (and lived and breathed) the game in Canada but realistically the market was probably about 20% at most when compared to how much baseball product was moved in both countries. So there wasn't a whole lot of dollars to be had and there was also a pretty weak exchange rate.

I briefly touched upon the lone Canadian Bazooka issue earlier in this series of posts and frankly, it's ridiculously scarce and also replicates the great card design in 1971-72.  Here is a nice panel: 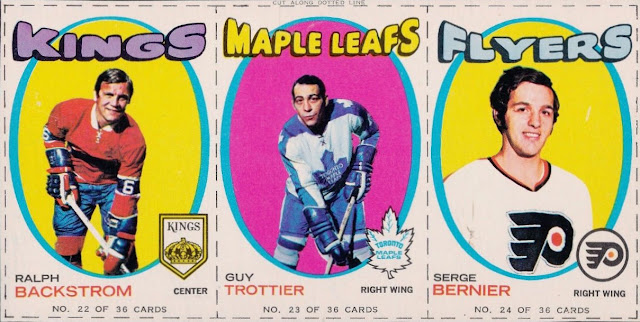 The Bazooka cards are a bit smaller than the regular issue; the VHC Guide pegs them at 1 7/8" x 2 3/4" and the pictures remained the same.  It's hard to find these without tape marks on the end cards as if they weren't difficult enough.  I'm pretty sure that Serge Bernier is currently starring in The Americans alongside Keri Russell.

O-Pee-Chee really branched out for the 1971-72 season.  A standalone issue of 24 Posters came and went pretty quickly.  These actually came in attached pairs and included a shot of the previous season's champs.  Feast your eyes.... 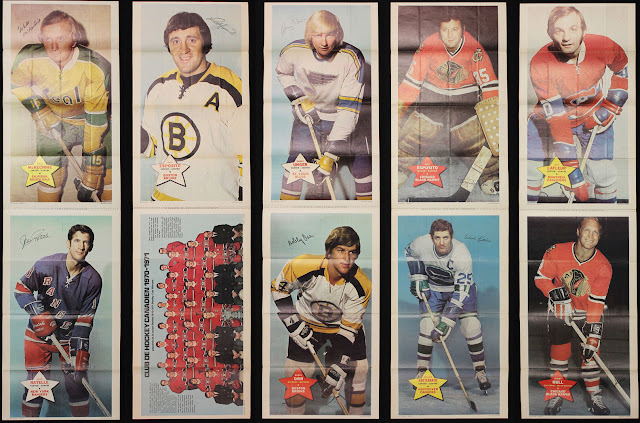 Each individual poster is about 10" x 17 7/8", printed on cheap stock but lots of them were cut apart so your experience may vary. In addition, a veritable plethora of folds makes minty poster impossible. Those are clearly patterned after the 1968 US Baseball Player Poster issue, packaging and all. Here is a look at the cutting lines in the middle; the waste area seems to be superfluous to me:

The 1973-74 OPC WHA Posters have also been looked previously at in this series.  Smaller than the 1971-72 posters , they are printed on thicker stock and look a lot nicer. VHC has them measuring 7 1/2" x 12 1/2" and I'll use that as I don't want to unfold and flatten my very nice example just to confirm. They were not paired but did come two to a pack: 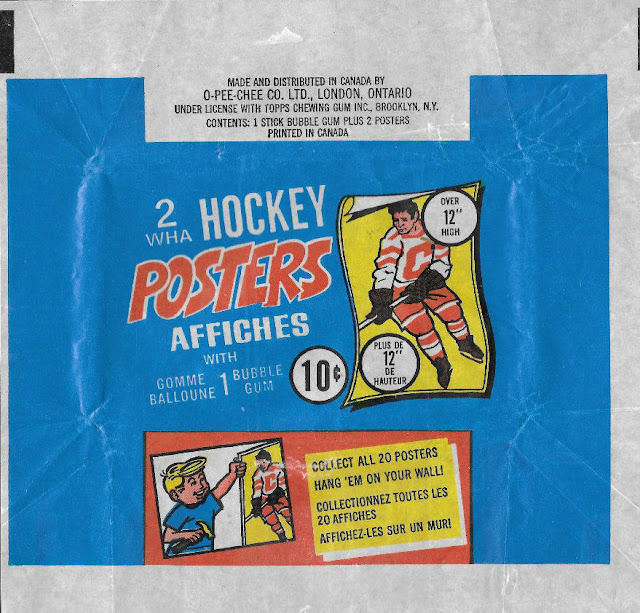 The combo team/league logo is quite prominent: 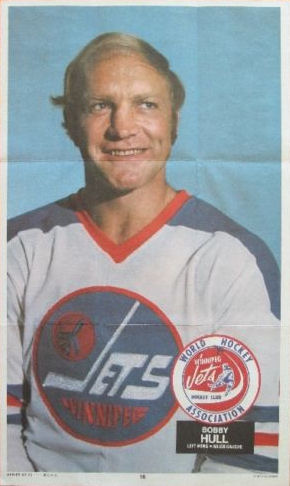 Having gone big in Canada, Topps went small in the US the following year.  Their 1974-75 issue of Cloth Stickers featuring NHL team emblems is a real head scratcher.  Topps was experimenting with cloth stickers on the Baseball side at the time and I get that but these are just weird: 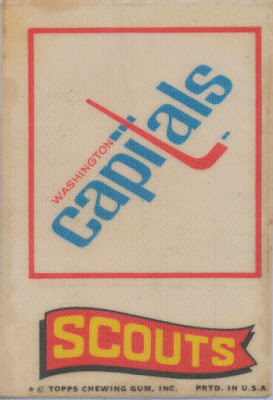 Very much in thrall of the 1973-74 Baseball Action Stickers, at least the cloth versions of those, you may notice the dimensions are a bit off. That's because they are a quarter inch short in both directions from standard size. I have no idea why Topps chose to do that. There are 19 large sticker subjects and 18 pennants (the NHL did not get its own pennant) and with mixing-and-matching  24 different stickers make up the full set.  The early 70's Topps sticker glue bugaboo also presents itself rather messily. Topps would not really figure out a proper glue and cloth material ratio until the 1977 Cloth Baseball set was issued.

The pack features a Boston Bruins logo; odd since they had lost in the cup finals to the Flyers to conclude the 1973-74 NHL season.  Maybe Topps only issued these in a select few cities; they are certainly hard to find, although I wouldn't call them scarce. 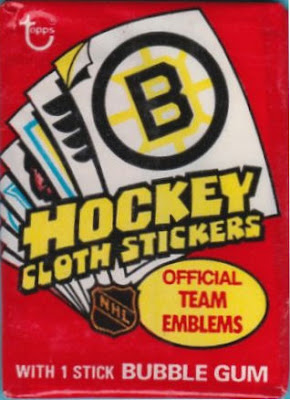 Now, while the NHL did not have its own pennant, it did have a larger presence. A checklist card had one of nine puzzle pieces on the front (yes, front).  Here's an uncut panel: 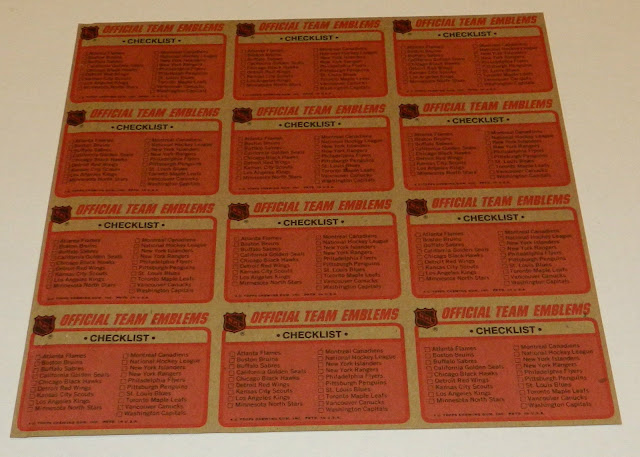 Maybe Topps issued a checklist to show there were no WHA cards in the set. Of course, it also helped stiffen the pack.

If you flip it, you get: 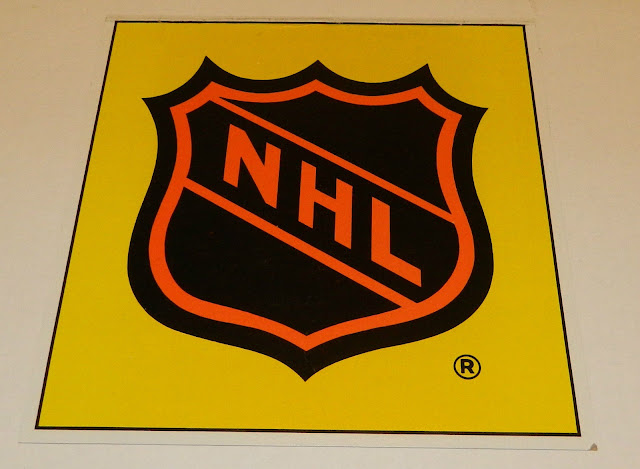 Things quieted down for a bit on the secondary issues front until 1979, when a tough to find little item came out:

Once again I had to nail scans from Bobby Burrell's Vintage Hockey Collector Price Guide (1st edition; he's now up to a 2nd edition).  Topps was experimenting with similar type pairings in the US across most of their sports lines (but not basketball). They would repeat the procedure in 1980-81 as well, although it's unclear to me if that was just a reissue of the blister pack.  I'm amazed it still has Topps as being in Brooklyn; they were pretty much using their Duryea, PA address from 1969 onward and I believe this is the latest date where I have seen such a thing. Here is how the interior of the wrapper looks: 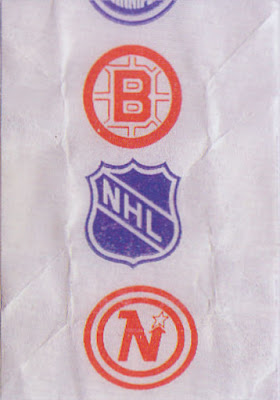 For our last peek at secondary hockey offerings, here is a familiar looking Giant Photo as Topps issued similar ones for baseball and football in the US: 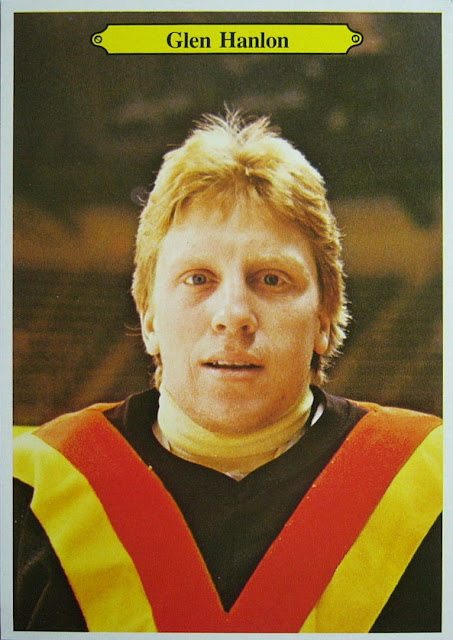 Hanlon looks like he should be on the bridge of Battlestar Galactica! The ginormous O-Pee-Chee logo on the reverse is absolutely killer: 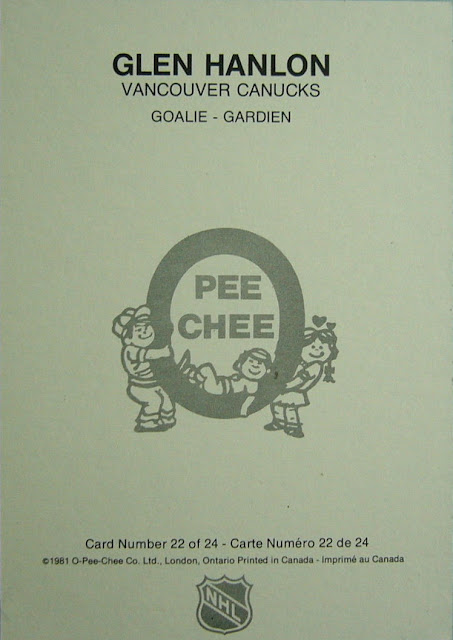 Back with a look at some hockey premiums next week.
Posted by toppcat at 8:00 AM

First, enjoying the blog! Second,about the 1974-75 Cloth Hockey Stickers, I managed to snag a few here in Panama City,Florida, at a W.T. Grant store because they somehow wound up in a bag of Topps "Fun Packs"; along with Creature Feature cards among others. A great "$1.50 Value"