Visit From The Turk

A visit from the Turk is a phrase I associate with roster cut downs in pro football, namely one that does not result in a good outcome for the player visited.  The origin of the phrase is murky at best but the Turk was a team employee who knocked on a player's dorm room door in training camp and told him he had been cut from the team. Fun job.

A different Turk who did a lot of work for Topps, namely Ameen (Turk) Karam, was a scout for the Cubs, Yankees and Dodgers and it was he who signed a lot of baseball players to Topps contracts beginning  (I think) in 1950 while he was still scouting for the Bums.  Turk had access to the clubhouses and was a hard worker at getting players to sign with Topps.

An article from the Berkshire Eagle on August 7, 1952 mentioned he did most of his signings between June 15 and July 15 but would soon change his methods to something ultra-modern! 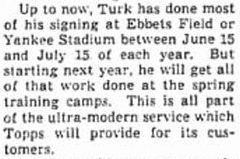 Quite interesting but to me not even the most interesting tidbit from the article, which read:

I had never heard of Topps planning a 1952 NFL set until I read the article.  Things must have changed rather quickly as we know they released no such product and would not have a real NFL set until 1956, after they had bought out Bowman. So I'm thinking Bowman got wind of it and squashed it. I am further thinking Bowman then decided they needed to bring their 1952 Football cards up in size to something approximating the Giant Size cards Topps introduced in 1952 as a result. Hence the small and large sized offerings from Bowman. 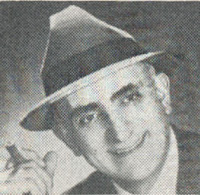 That picture is taken from the 1962 Topps Rookie Banquet program.  Turk was only 54 years old when he died on May 29th the following year of a heart attack, which occurred in the Topps offices at Bush Terminal.
Posted by toppcat at 8:00 AM