Holey moley kids,a longstanding question has been answered by the recently concluded Robert Edward Auctions summer extravaganza!  A "second series" press sheet finally reveals who replaced No. 145 Ed Bouchee in the set.  Bouchee, you will recall, was arrested and convicted for exposing himself after the 1957 season ended.  He ended up in a psychiatric hospital for a spell, was sentenced to probation and rejoined the Phillies mid-season.  Topps pulled his card, eradicated him from the checklist and double printed another in his place.

Thanks to this amazing press sheet we now know who replaced Bouchee! Scope it out for yourself: 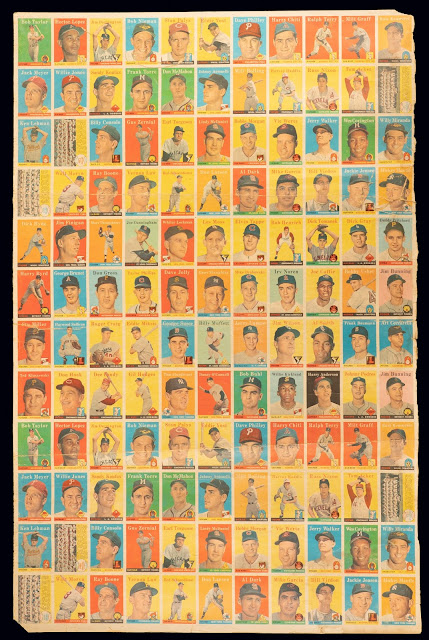 I believe this is the series 2 "A" sheet as the left side looks pretty good, whereas the right side looks like a three year old cut it.  The pattern is A/B/A, with each letter representing an iteration of four 11 card rows.  These are usually identical in their composition as the "B" sheet would use a B/A/B pattern to make up a full 88 card press run.  Thanks to this pattern we can see that #115 Jim Bunning was double printed to replace Bouchee in the "B" block.  Here is a closeup: 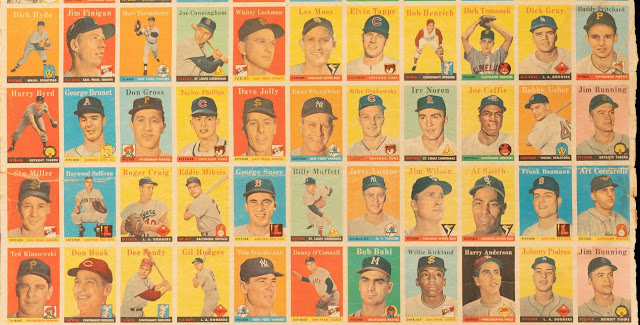 One of those Bunning cards replaced Bouchee's!

This sheet also confirms the Theory of Checklist Relativity, where Topps would run off 110 different cards on the first series sheets but only show #1-88 on the first series checklist (and all the succeeding Checklists), saving a full press run in the process over the course of the season.  1958 resolves in Series 5 because I believe the original intent was to issue 440 cards but Topps signed Stan Musial that summer and rushed a series of All Stars, nobodies and has-beens, so it was the semi-high series thereafter. Here is how it worked in 1958:

They used this lagging gimmick into 1966, nice little sales stimulator there Topps!

UPDATE 9/2/19-Reader Eric Loy pointed out in the comments there is  projection difference in the two Bunnings.  The one in row 2 has more of the "t" in "Detroit" showing while the one in row 4 has less and is shifted slightly leftward. 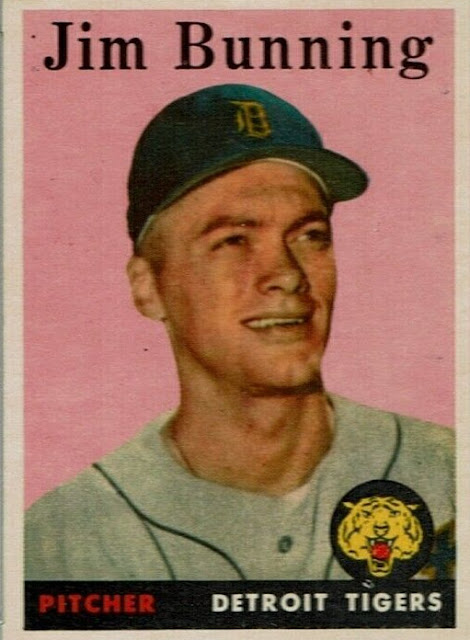 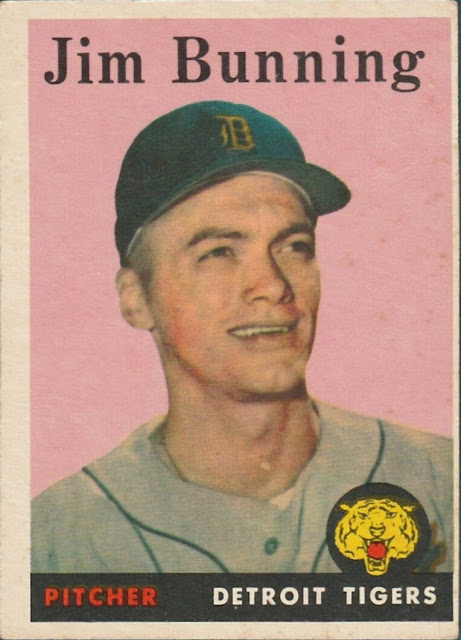 Thanks Eric!
Posted by toppcat at 8:00 AM

In checking the 58 Bunnings listed on COMC, you can definitely see a difference in a few of the cards....

Check out the differences in the bottom right of the pictures...

Good eye Eric-the projection is indeed shifted slightly left on the bottom-most Bunning. Now, which one was planned and which was the sub?!