There are some Topps sets that live multiple lives.  Topps was an international company very early on in their history, well before they started putting cards into packs and by the mid 70's were established in a couple of dozen countries at least, usually through local licensing deals. Licensees used Topps artwork from US sets for the most part, although sometimes it was the opposite (like the Beatles B&W sets they rushed out in the US that originated in the UK). You could easily fill a book with how they did business in the UK alone during this time.  Canada though, was always their go to secondary market, through a long time association with O-Pee-Chee, of London, Ontario.

I've been trying to piece together a rather devilishly related grouping of cards that start with the 1968 Topps Crazy TV test set and also two semi-related issues with a decidedly Canadian bent.

What I can tell you about Crazy TV is that it was tested in the US as a 22 card set (skip-numbered to 55) and then reissued twice, with at least one reissue probably just relegated to the purgatory of Topps Fun Packs; both reissues were 22 cards in length. There is some packaging material out there and I will address this aspect at the end of this post.

The original test of Crazy TV  (referred to as Type 1)  had a wood grained front and a finished back that presented a humorous cartoon gag under the guise of TV Knock-Knocks, which appeared in an "orange"colored scheme that I don't think is really "salmon" (as per most guides).  There is also a version (Type 2) with identical fronts (wood grain) to the finished cards but with a blank back that is white, possibly indicating a proof, possibly not.  The third type of Crazy TV has a coral colored obverse, with a plain brown back that shows signs of having been in a wax pack. The coral color is darker than the traditional salmon Topps used in the late 60's that allegedly appears on the back of the Type 1 cards and also some other sets that Topps definitely put into Fun Packs.

Here are the various variants:

Type 1, the "regular" test issue and it's more "orange" reverse: 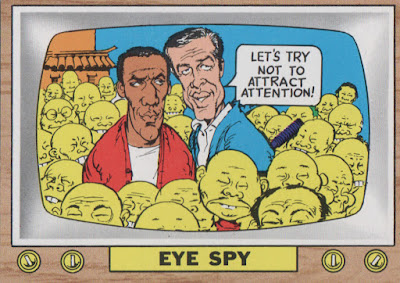 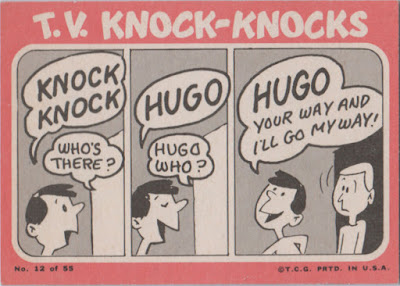 Type 2, possibly a proof with this white back: 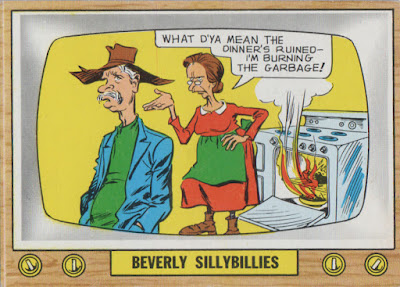 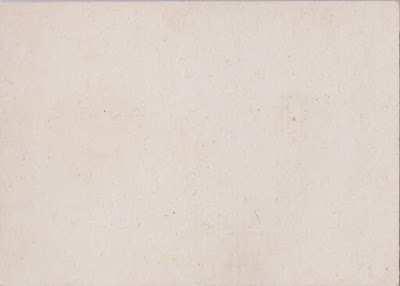 Type 3, in "Coral" with a tan/brown back that looks to have been issued in a wax pack: 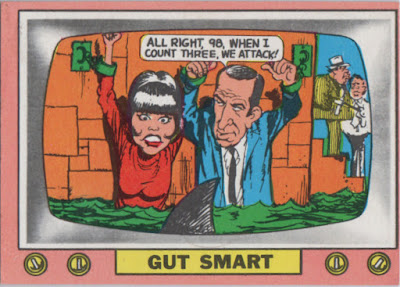 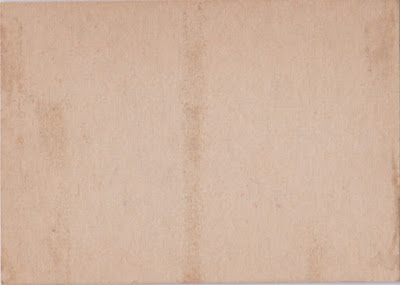 In terms of lightest to darkest colors, I see Salmon, then Orange in the middle and then the darker Coral. Its hard to tell from my scans but "Gut Smart" is darker than (the pretty racist) "Eye Spy" and it's quite obvious when you compare the two in person.  We'll get to Salmon momentarily but need to go north of the border first, then nip south again before heading north one last time.

As far back as when I first cracked my earliest non-sports reference books--the Sport Americana guides of the late 80's early 90's--I have struggled to understand why Crazy TV, a series called Knock-Knocks (note the lack of a "TV" prefix) and another called Ton O' Laffs have all been lumped together under the Crazy TV rubric but thanks to Friend o'the Archive Terry Gomes, who is deep into Canadian card research and wrote a comprehensive article on the various Ton O' Gum issues that appeared in The Wrapper #299, I now have a clearer understanding.

Terry sent a scan of the US Ton' O Gum wrapper that was an illustration for his Wrapper article. 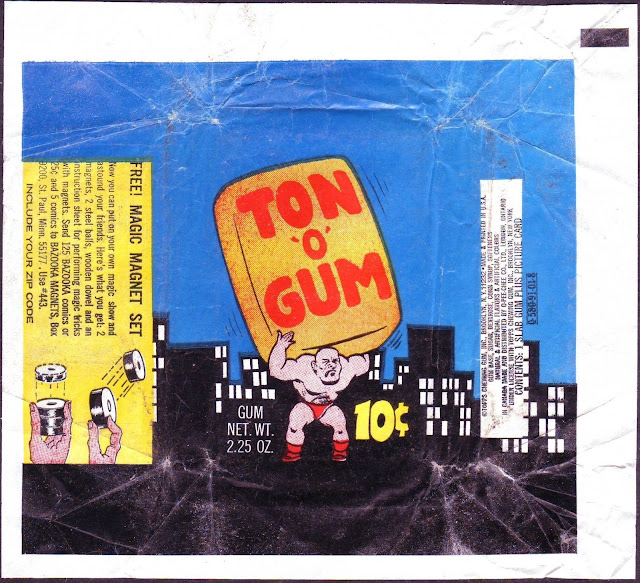 That commodity code indicates the product was greenlit in 1968 by Topps and in fact, the original iteration of Ton O' Gum may have been a US test of the larger Bazooka slabs that followed in the 70's. I make it to be from 1968-69.

Check out this link to Worthpoint, showing a US pack contents, namely two wood grain Crazy TV cards (there are two different "Gut Smart" cards in the set), two Ton O' Laffs and a single Knock-Knocks. All the non-Crazy TV cards are red bordered so I guess when Topps dropped the "TV" from the name they changed the color from orange too. In fact, Terry purchased this exact pack and opened it but that is not his scan! He has advised all cards in the pack were blank backed, so the Crazy TV examples are type 2. 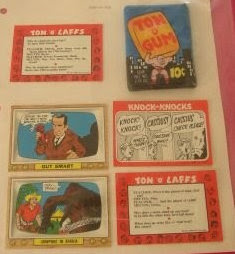 Now, in Canada, OPC issued Ton O' Gum multiple times, running from roughly 1968-69 to 1977-78. They also introduced Grape and Cherry flavors, mirroring the Bazooka marketing in the lower 48 and Terry has tracked 17 wrapper variants for OPC!  They mucked around with the orientation as well.  First, various wrappers; later ones use grams to measure the gum weight and tend toward the horizontal, those with no weight seem to be "middle period". I found most of these on the web, Terry supplied the final one below: 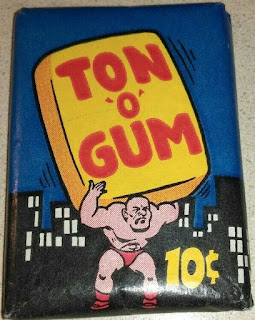 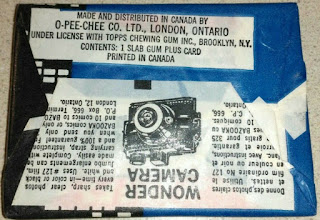 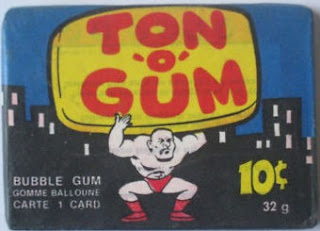 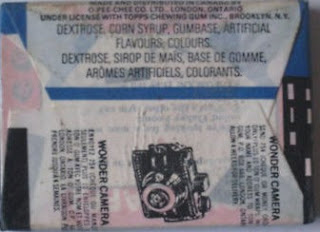 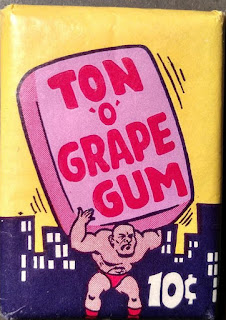 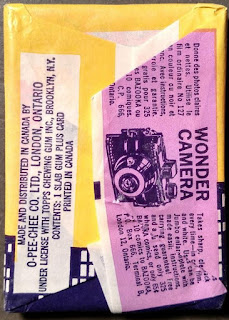 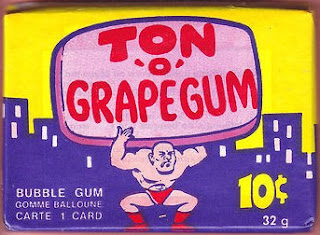 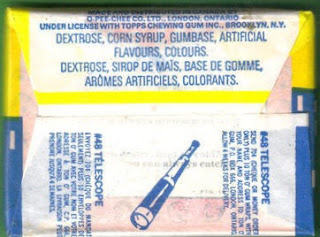 You can see a card through the back of this pack too.

Cherry seems to have come last and does not seem to have been issued in a vertical pack format: 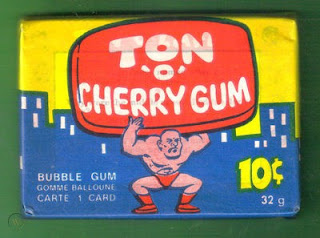 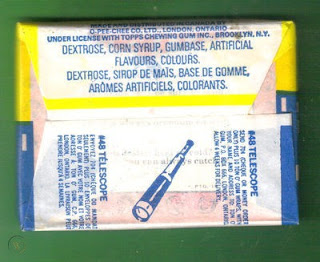 Yes another card. Hang tight, almost there, gotta get to the day-glo eye-popper from Terry first! 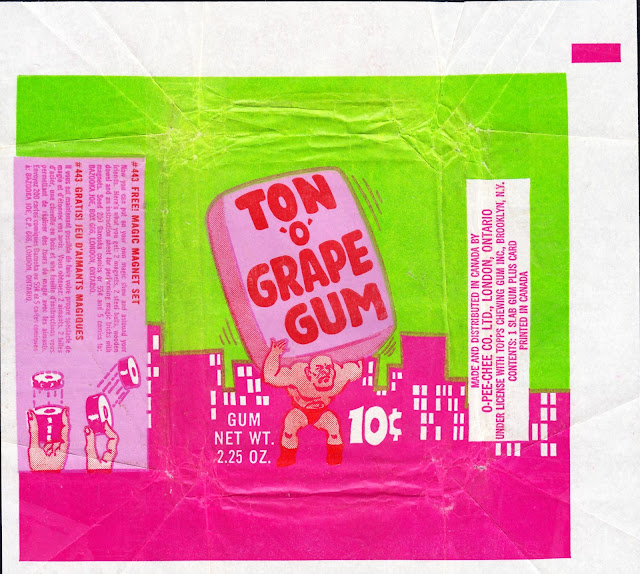 OK, so you got one card (sometimes 2, sometimes none per Terry) with your slab of gum.  These were red bordered Ton O'Laffs backed by Rigolons (a French translation of Ton O' Laffs) and the set is complete at 55 subjects. Terry sent me these to show:

John Bell's Canadian Non-Sports Catalogue indicates the packs sometimes came with two cards, one being an OPC Hockey card and Terry's article confirms it was of the 1974-75 variety. It's certainly an interesting way to burn off excess stock. 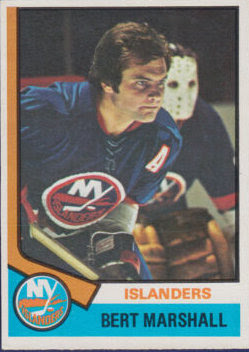 So here's the thing-there are versions of Ton O' Laffs (coral front, back is blank but from a wax pack) and Knock-Knocks (salmon front, tannish, unissued looking back) out there: 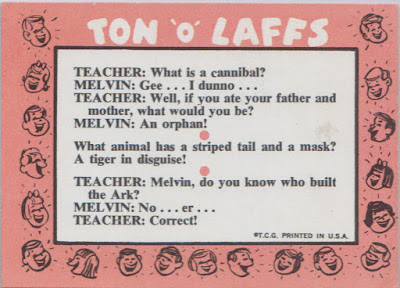 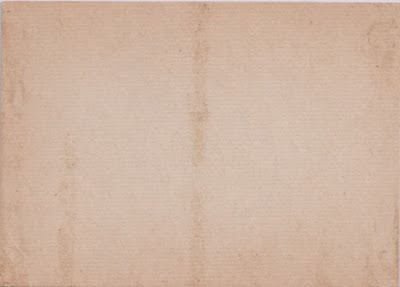 Seems to match the Coral Crazy TV, no? 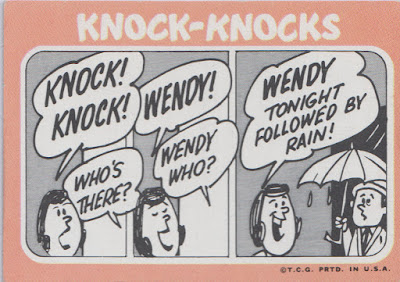 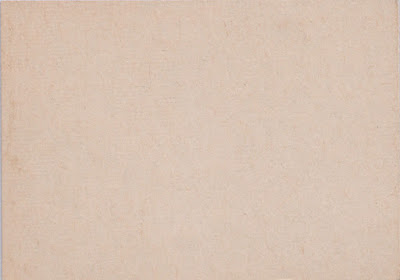 Where did these come from then?  They are US issued, but when and where?  Both have 22 subjects, seemingly indicating test status. The coral colored cards must have been issued together, perhaps in Fun Packs. But these salmon Knock-Knocks are mystifying me and are definitely not from the coral Ton O' Laffs school. Is there yet another issue of these out there?!

So which Crazy TV version came in this wrapper and this box? It seems like wood grain but the coloring is darker than on the cards: 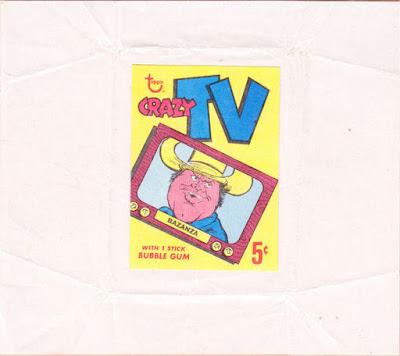 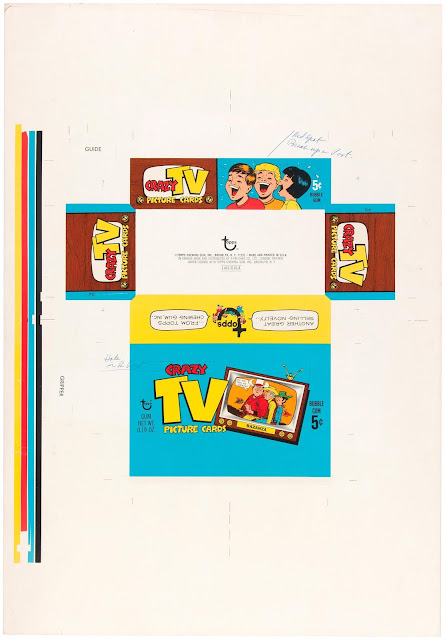 That packs using that test wrapper likely were not issued in that box, which would have been designed for a full release to stores. In fact, that box may never have seen the light of day; these marked up proof flats often indicate an item was changed for the final version. Did a full retail release get canned at the last second?  Perhaps fallout from the 1967 Wacky Packages led to a fear of lawsuits if Crazy TV was given a full retail release? Did the pack have a Type 1 where the box was planned to hold a Type 3?  And why did each of the three Crazy TV printings result in 22 card, truncated and skip numbered sets all with the same subjects?