I've been rolling through a ton of old hobby publications of late and am presently in the midst of The Trader Speaks (TTS) issues from 1978.  TTS of course was owned by the recently deceased Dan Dischley (a New York City cop who sometimes used his connections to go after hobby fraudsters) and was the pre-eminent hobby 'zine of its time until being overtaken by Sport Collectors Digest (SCD) in the early 1980's as the entire structure of selling and marketing baseball cards was changing.

197 issues of The Trader Speaks were published, with all but the last 18 under Dischley's stewardship. The first edition came out in November of 1968 and once the fifth issue came off the presses it followed a fairly set format, first with checklists and updates of same then more and more short articles.  It was punctual (almost unheard of at the time), informative and opinionated. Dischley published 179 issues including a special "Convention" issue for a three day show held at Shea Stadium in August of 1978 and never missed a month.  There were practically exponentially expanding numbers of shows occurring at the time and perhaps the most fertile time of hobby growth was from the Summer of 1977 through the Fall of 1978. A lot of this was aided and abetted by the appearance of the Sports Collectors Bible in 1975 and a couple of other early price guides.  Jim Beckett also conducted two price surveys in this time period, with TTS dutifully publishing the results and by time of the Shea Convention the modern hobby had been born.

Lew Lipset, a name familiar to all of us grizzled old collectors --and certainly a few ungrizzled ones-- very quickly became a major dealer (and eventually cataloger) in the mid 70's and by 1977 had a regular TTS column called Lew's Corner that was pretty entertaining but served the real (and dual) purpose of tracking pricing of star cards among other things. Hobby price guides and the Beckett surveys had mostly focused on full sets and certain series within those sets and while dealers had been warming up to the idea of what we would now call superstar card pricing since the early 70's, Lew was one of the first guys to discuss and embrace this idea. He had some other neat observations as well and today I'd like to focus on one in particular, which came via letter to him: 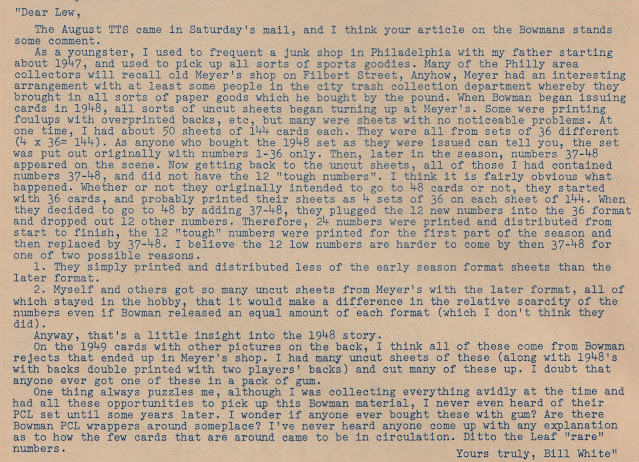 Most readers under the age of 50 or so probably do not recall the glorious messes that were usually referred to as "junk stores" but along with antique shops, classified ads and "trading post" periodicals (TTS was modeled after the latter) they essentially comprised the eBay of their time and even the smallest towns always seemed to have a handful of good to great ones ones. Meyer's sure seems like a classic junk store but also one that gave us a lot of Bowman oddities that have survived to this day.

I'd wager a good chunk of the handcut 1949 Bowman PCL cards circulating today originated from Meyer's and were just overlooked by the writer of the letter. There are unusually high amounts of the pre-1953 Bowmans out there that are print oddities, such as this Murry Dickson from my collection, that could have come from the shop as well: 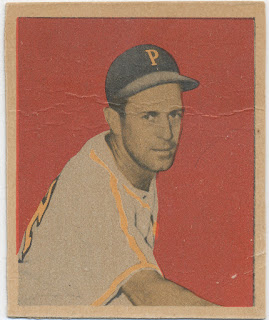 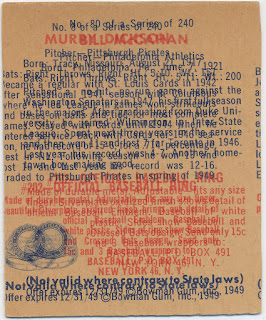 Bowman's 1949 PCL cards are now thought to have had some distribution on the west coast, both in their own packaging and also (possibly) mixed in with the MLB cards for a very, very short period of time. While still difficult, there are found more readily today than they were in the 70's, when they were widely considered to be among the toughest of all postwar issues. Lew's concise comment the prior month says it all:

The PCL cards have been steadily demystified over the years and while still a bit pricey, you could assemble a couple of sets with ease just from current eBay listings.  Don't get me wrong, they are not easy but the PSA pop report has 569 showing, or around 15-16 of each on average and interest in PCL issues is not what it used to be.

Here is the concise history of TTS publishers in case you were wondering: