One of the neat little, almost inadvertent things Bazooka did with their party boxes - usually sold in groceries and supermarkets - was include an extra image or two on the splash panels with a small photo of a player included in the set that was being issued on the back of the box (and one one occasion, inside the box).  These were not meant to be cards but merely served as advertisements. Topps picked these subjects well as they chose some real superstars for these little pictures.  While the 1959-62 boxes were issued with a simple splash panel alerting kids to the baseball cards on the reverse, they were of an older style, with a cello covered window allowing a peek at the contents inside, like so (1960 version I believe):

That changed in 1963 when they issued this bad boy: 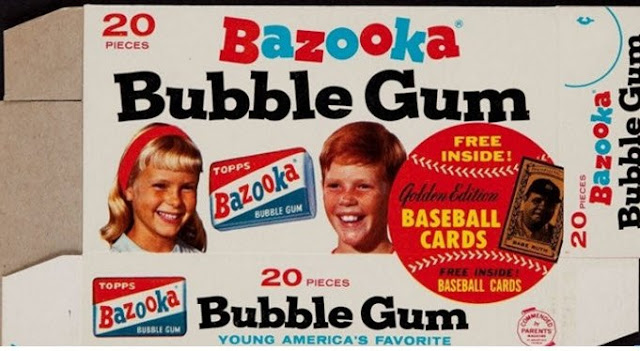 In addition to introducing the country to the two tykes seen here, the splash panel for '63 has an image of what was purported to be a sample Babe Ruth card from the All Time Greats set, with five cards included within.  It's amazing what a little competition did to Topps over the years, spawning new products, some quite innovative, in order to pry attention away from their competitors, in this case Fleer.
Collectors of this set will quickly realize that image of the Babe included on the card inserts looked nothing at all like the one shown here.  Rather, we got an aging Ruth, fairly close to the end: Hoo boy, I'll bet the kiddies were disappointed when they saw that!  Topps probably could not, or would not, license an image of Ruth from his playing days for a secondary set, so they improvised and used an image from his "farewell" at Yankee Stadium that they had deployed in the 1962 "Babe Ruth Special" subset that was issued in the wake of the M&M Boys chase of his home run record.* That subset at least had some period images and at a guess, Topps copyrighted the box before their licensing agreement with Ruth's heirs was up.
Check it out, it's a direct lift: 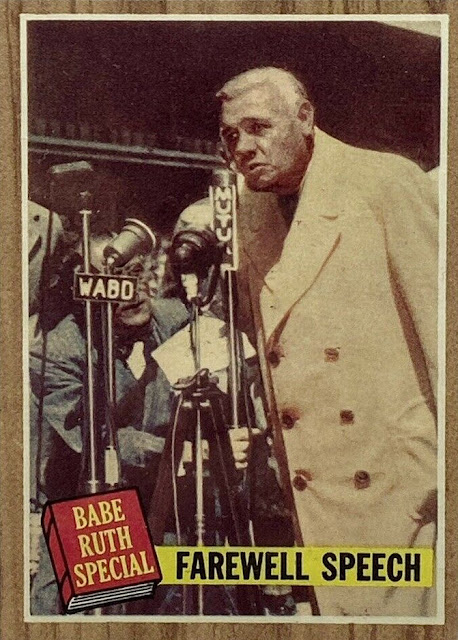 You can hear the speech here-Babe was clearly dying when he gave it on April 27, 1947 and his voice is absolutely shot from the throat cancer that was killing him.
1964 saw Bazooka include a sheet of 10 Baseball Stamps in the box, along with the three cards on the back.  The splash panel on the front didn't have a player image but one of the end panels advertising the inserts sure did, in spades.  Here's the splash:

And here's the end flap:

(Courtesy Sports Collectors Daily)
OK, so it's the same image they used the year prior. On that note, here is 1966, from my buddy Spike's Number 5 Type Collection Blog:

Three times was the charm for that Mantle image.
1968 didn't yield a bonus image as the cards moved to the side flaps for reasons unknown; maybe they were hiding them from Marvin Miller or something. 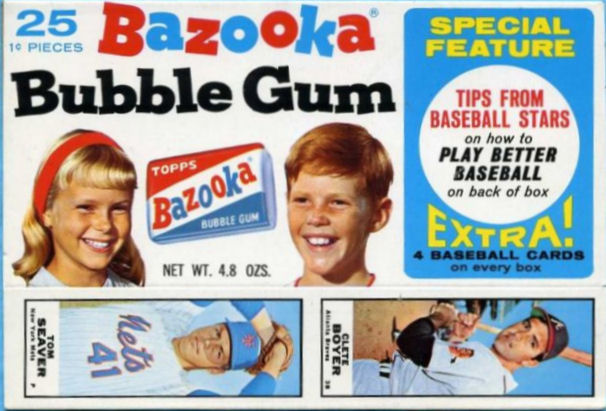 I sure hope those kids got residuals! 1969 saw a move to an All Time Greats format that may look familiar, although hard to tell if it's the exact same Ruth image on the box from 1963 due to some shadowing on the former, but it's pretty close if it wasn't: 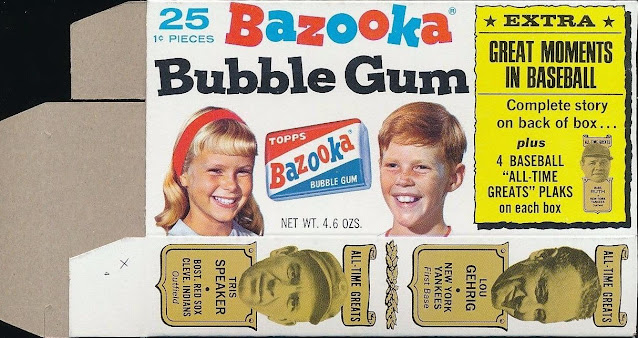 There's four All Time Greats "plaks" on each box, two per side panel; they obviously aren't cards as there's no definitive border but they recycled the "plak" wording from a failed test set of the year prior and they're not those either! Still, I wonder if the Ruth "card" was meant to be the one they intended to issue in 1963 and Topps, clearly having licensed certain images due to the alleged Baseball Centennial in 1969, finally put it to use? This is the Ruth in question, 1969 version:

To their discredit, they reused the exact same box in 1970!
I've previously posted about these 1969-70 boxes but it was a long time ago and an update is due.  So here is the full checklist for the 1969-70 boxes (and they are generally collected as full boxes due to their configuration). Apologies for the formatting:
BASEBALL GREATS (BOX BACK-LARGE CARDS)
*- Player does not appear on an All Time Greats Side Panel.
ALL TIME GREATS (SIDE PANELS) 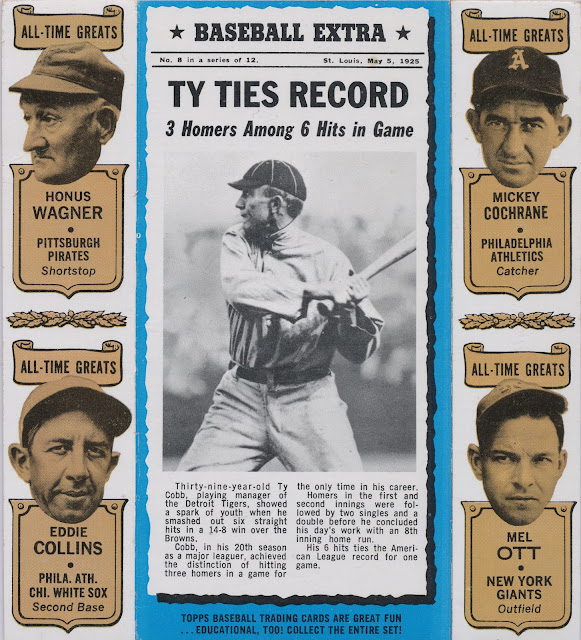 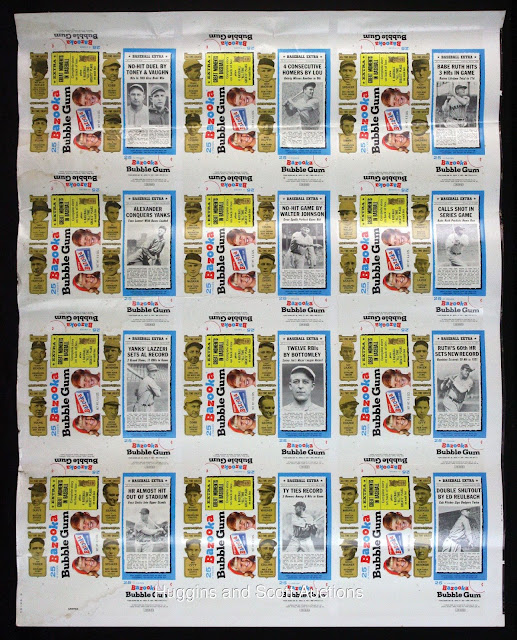 1971 brought an end to this fine line of Bazooka package design cards.  With Koufax and Mantle in retirement, Topps went with a big name in 1971, from the Big Red Machine:

(Courtesy Dave & Adam's Card World)
Johnny Bench may have been the hottest story in baseball in 1970-71, before interest was focused on Vida Blue before the midseason of '71 (no joke), then on Hank Aaron's home run chase.
I can assure you that those kids were still on Bazooka boxes well after the baseball cards were discontinued in 1971 and for all I know, they are still there today!
Bazooka cards are really not widely collected but Topps used some classic shots on them.  Check out this collection of 1966 panels that Robert Edward Auctions had a while back for proof of this: 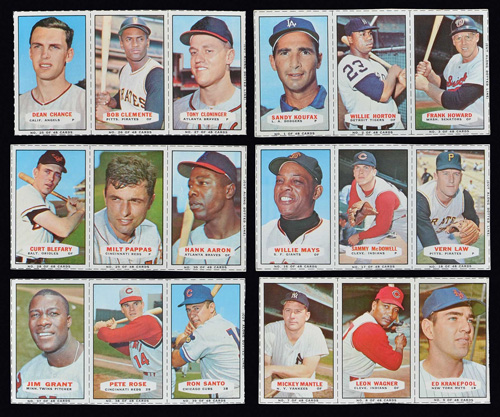