Something different to chew on today campers! Friend o'the Archive Lonnie Cummins unearthed an  interesting bit o'Bazooka history last month over at eBay.  The item in question is not something I had really seen before and was known as Bazooka Bits: 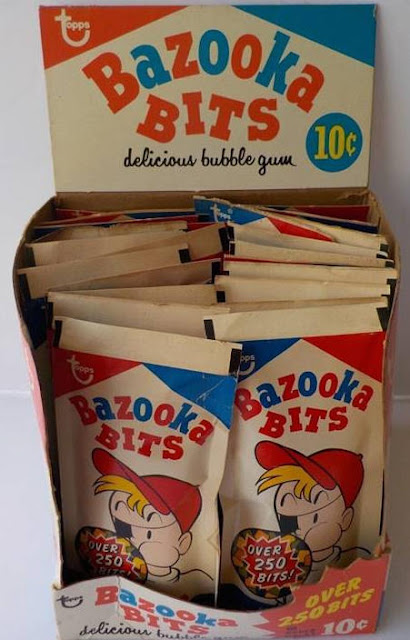 I would have been all over these as a kid, since I loved little Chiclets style gum!
The sale of tiny candy coated bits at Topps date back to the very early 1950's, when they introduced a product called Block Busters that was eventually discontinued, with their remaining supply boxed up along with a neat Topps Baseball Button in 1956: 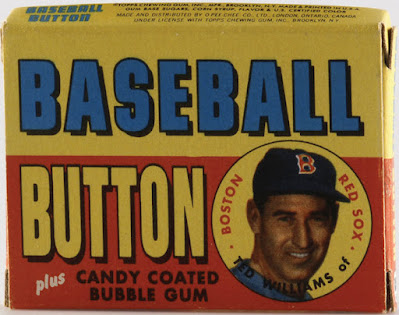 If you look at the pack illustration, you can see the little gum bits are quite colorful: 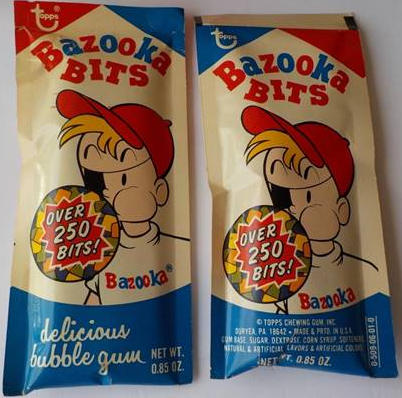 That is a bit more modern version of Bazooka Joe adorning the pack than was gracing the comics at the time, as Joe's principal artist, Wesley Morse, had passed away several years prior to these being offered.  The commodity code indicates 1970, and while I thought 1980 was also possible when I first saw these scans, they definitely date to '70, for a simple reason I will get into shortly. Before we go there however, I think that version of Joe might have been done by the same artist who created this puzzle for the 1972 Big Bazooka Cards but I'm not 100% convinced: 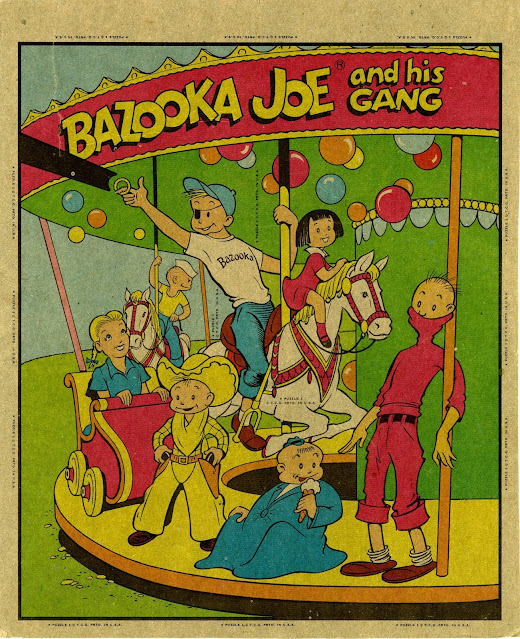 That awesome piece of uncut goodness can be found, with a  LOT more Bazooka related stuff, over at the Bazooka Joe Comics site.
The bottom indicia is unexciting: 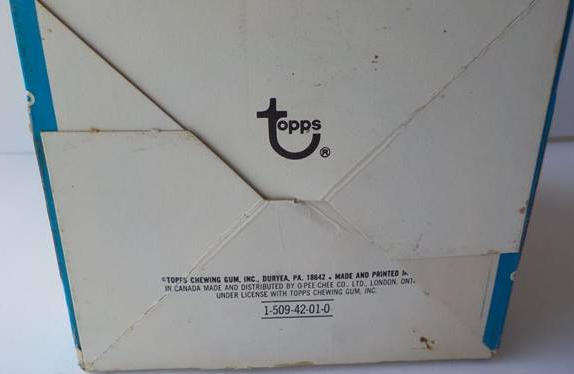 (courtesy collectingcandy.com)
So did the product just not sell or did the folks over at Warner-Lambert (who had acquired original manufacturer American Chicle in 1962) that sold Chiclets intervene somehow due to their packaging?  Topps had tangled with them before (and resoundingly lost), so it's possible to my mind as this is a rare bit o'bubblegum history!

The Bits persisted for a couple more years, rebranded as Presto and Gumniks:

I never saw any of those either as a kid and I was on the lookout for this stuff! Our local ice cream truck carried a wide line of Topps products but not these.  They still look pretty tasty to me!

(UPDATE 7/18/22 - Friend o'the Archive Mark Newgarden advises these were spotted on Staten Island around the time of the original retail issue.)