The Thing That Should Not Be

It's been almost 13 years since I last commented on the purported "1963" "Topps" Mickey Mantle "mask" "high number premium" which, to reiterate:

You've seen one or two of these I'm sure: 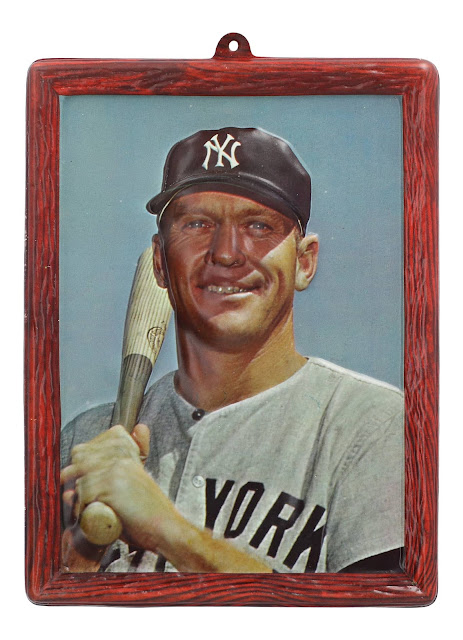 Said to measure about 6 x 8 inches, as with the front, there is no indication of manufacturer on the back: 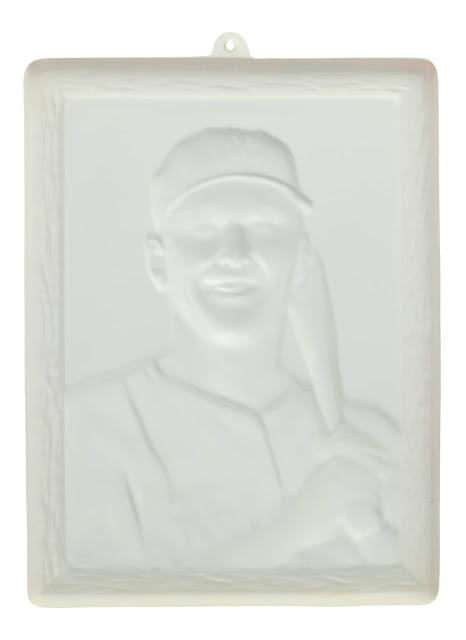 One of these went for $6,000 over the summer, with a description that linked it to, you guessed it, a premium offer on some 1963 Topps high numbers packs.
Well, there's still a decent amount of 1963 wrappers and packs out there and this has never been sighted as an offer on one of them.  Zero, zip, zilch, nada. More properly a plaque, and while this is something reasonably hard to find, they do come up now and then. But there is no evidence anywhere of Topps, or anyone else for that matter, offering this as a premium and frankly, checking the known wrapper premium offers is not all that difficult. The use of the year 1963 in connection with these is also purely speculative.
My own personal opinion is that this was tied to some local store or manufacturer, quite possibly domiciled in Texas, and was intended to be used in a very limited promotion.  Unlike the 1956 Mac Boy Mantle decals, which have been found in some quantity and were apparently used as premiums well past their original intended use (affixed to a bat rack made in Texas by a small furniture maker), these don't seem to have been made in any type of significant quantity. PSA also does not grade these, whereas the Mac Boy Decals have been graded by them over 170 times, with about three dozen assessed over at SGC to boot. I've seen a reference or two connecting the plaque to a liquor store or promotion but again, it's all speculative.
I'm not sure if the Topps mis-attribution does anything negative to the value at this time.  I suspect if it could ever be tied to Topps it might increase the value but it's something that, should that connection ever be discovered, was likely sourced elsewhere for an internal mockup.
One final point, if you look closely at the reverse, it does not appear that either the NY on the cap nor the New York on the uniform was part of the mold.  They seem painted on, although if the cap is embossed it's hard to discern from a scan and I wonder if this was even tooled to resemble Mantle originally. The reverse peek shows what looks to me like a shadow of the NY logo on the cap but it doesn't seem to go deeper than that. An original would be needed to tell for sure but quite a bit of the appeal is the painted look of the Mick.
I also find it odd that something associated with Mantle and known for as long as this has been known, still has no identifiable source.
Posted by toppcat at 8:00 AM

After reading this post and the one from 2009. My thoughts:

5. Most 1965 Topps embossed are side shots of the player instead of head on.

6. I could not verify / or have any proof but that face of Mantle I swore that I saw in a Renata Galasso catalogue from the early 1980s. Though I am unable to find the catalogue or ad that I am thinking of.