I've briefly touched upon the 1949 Bazooka Historical Almanac series previously and thanks to some spoils hard-won in a recent eBay auction, I'm able to detail a few more of these sepia-styled comics.

Historical Almanac was co-issued with the Willard Mullin Spalding Sport Show comics as the first to envelope one-cent Bazooka bubble gum.  I've got to update all sorts of information on the Mullin comics so won't link to my prior posts, but believe there may have only been about 25 subjects in that series. Given that each Historical Almanac comic covers an event on a specific calendar date, it has a potential universe of at least 366 subjects! I say "at least" as BFF o'the Archive Jeff Shepherd reports he has seen at least one date for two different subjects and over 110 different comics!.

Now I doubt that Topps created 366 (or more) different comics for the series but I've learned to never say never! My eBay haul shows some consecutive dates among the nine in the lot: 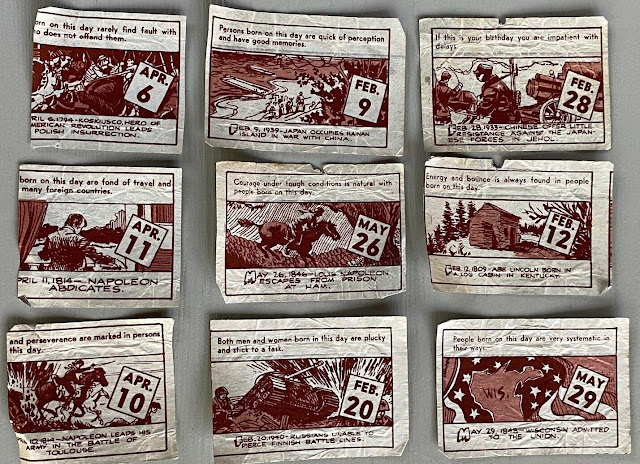 I've seen some short-cut comics from the series issued after these as well and its not clear when the trimming occurred, it's possible some even came this way originally. The use of dates before 1752 is fungible, thanks to the Gregorian Calendar being implemented by England and its colonies.  The Julian Calendar used previously was originally 10 days ahead of the Gregorian, presently there is a differential of 13 days. So which date is which?!

Well, here's one from my haul that matches on the Julian date-Louis Napoleon's escape from prison: 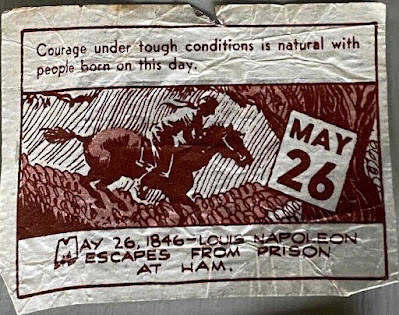 The aphorism on Top/Event Description on Bottom seems to be the most prevalent style but it's switched on several examples such as this one, detailing my maternal ancestors arriving in the New World: 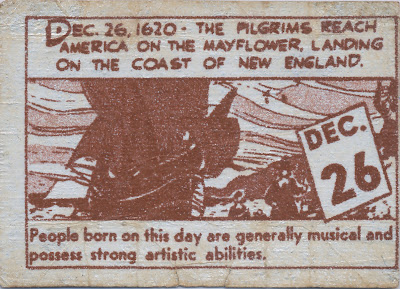 I've seen January dates with that style as well so they seem to span the entire twelve month calendar. The two different placements of  text (let alone the typefaces for the "people born on this day" bits make me think the issue was extended beyond whatever number of dates were used originally as it would be quite odd for more than 50 or so subjects to be printed in one go for anything Topps ever issued with Bazooka.
Here's some history:  The Pilgrims, after a detour to Cape Cod, arrived at Plymouth on December 16 (or 26 actually) so it looks like Topps used a mix of Julian and Gregorian dates for the earlier events in the series! That would now be December 29th in the Julian calendar given the gap spreads by a day every century.
February 12 goes presidential: 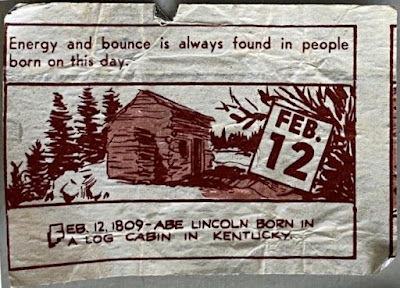 I dunno, do you think Honest Abe had a lot of energy and bounce?!
More recent events overseas also made the cut: 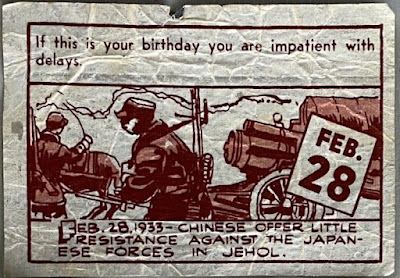 There's at least one other comic detailing Japanese aggression in China, so the psychic and physical wounds from the events of World War 2 were clearly still raw and I wonder if Pearl Harbor was part of the series as well (I'm thinking it was).
It's certainly an entertaining and even reasonably informative series as Topps navigated their way through the end of the 1940's with aplomb.
Posted by toppcat at 8:00 AM