Well once again I was going to post one way and have ended up posting another. Ah......

Topps released their first football set in 1949, a set of 100 small felt back cards that came inside penny packs of Varsity bubble gum:

I've shown the cards before but here is a front and back; the back was made of "felt", I guess to mimic a true pennant: 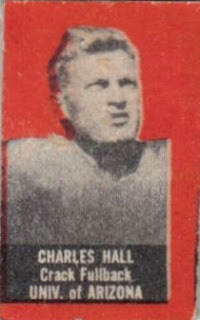 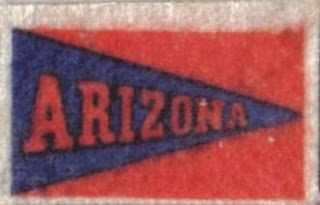 I am not here to dissect the set, that will be done another time. What derailed me today though was this scan:

The matchbook advertises the All America Football Conference, a competitive league that gave the NFL some headaches from 1946-49 before having some teams absorbed. One team that did not survive was the New York Yankees, itself an amalgamation with the old Brooklyn Dodgers team that found itself playing in Yankee Stadium in 1949. The Topps advertising is interesting but seems misplaced as it looks to be promoting the penny gum tabs that were still popular, albeit fading, instead of Varsity bubble gum. The "Don't Talk Chum, Chew Topps Gum slogan"was hanging on though.

The matchbook must have been produced before the season began as the six home games for the Yankees were their full slate. I can only think since the Varsity cards depicted college players, Topps did not think there would be enough interest among fans of the pro game to market their cards to the AAFC crowds, or perhaps the crowds were not too large. Anyway, I thought it was a neat item to share today.
Posted by toppcat at 2:20 PM