Topps was in the midst of a fabulous run of sensationalized subject matter on their cards in 1950-51: after Hopalong Cassidy had been introduced, the company issued a lurid set of 100 cards entitled Bring 'Em Back Alive, which depicted fantastic jungle scenes allegedly encountered by the explorer Frank Buck and then the multi-series Freedom's War, with all sorts of explosions and mayhem depicted.  Bowman was also issuing similar cards (Red Menace) in this time frame.  Then came a lengthy protest from a group called New York Veterans for Peace, a letter writing campaign from large numbers of concerned mothers, some negative publicity in the press and before you knew it Freedom's War and Red Menace were yanked from the shelves by their respective manufacturers, each at least a series shy of completion and much to the chagrin of each firm as enormous profits were wiped out almost overnight.

While intolerance and censorship are nothing new, they do make companies  react.  Bowman had made their mark after World War 2 with a number of sets depicting the carnage and violence created by man and Topps was never a company to shy away from salacious material; there are bare chested women depicted, National Geographic style, in Bring 'Em Back Alive after all but there were lots of parents who controlled lots of allowances and they would not be given fresh ammunition by Topps, at least not immediately.

In the wake of the Freedom's War debacle, Topps president Joseph Shorin announced they would cancel any more orders and come out instead with a second series of Frank Buck cards.  Today we know that a series called Animals of the World ended up assuming the numbering of Bring 'Em Back Alive, depicting one hundred very tranquil looking beasts, all taken from artwork by an artist named Mary Baker.  Take a look at a Bring 'Em Back Alive example first: 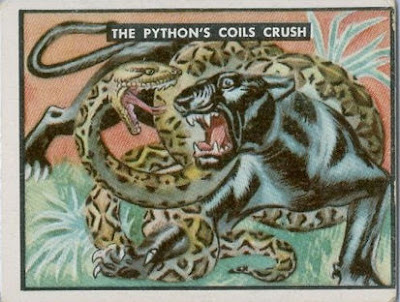 
That is a typical example from the set and not even the most shocking one.  Now compare to a typical Animals of the World card: 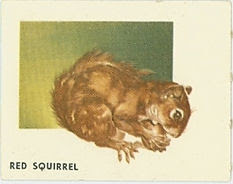 That is actually one of the more action packed examples from this set.  Quite a difference, no?

Let's look at the backs, BEBA first then AOTW: 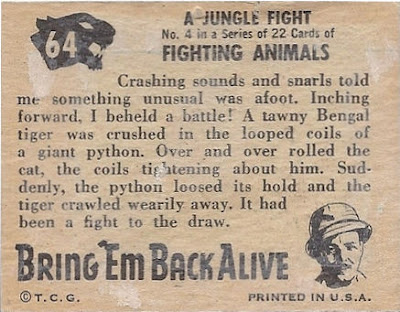 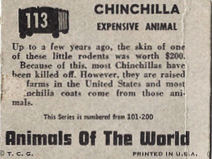 Note the wording about "This Series" near the bottom of the AOTW card. Since there was no first series, we have to rely upon what Joseph Shorin said about a follow up to Frank Buck.  Now, this is not the point of today's post, despite the long winded wind up.  What piqued my curiosity today was an item description in the 1989 Topps/Guerney's auction catalog concerning original Animals of the World artwork, which states:
"ANIMALS OF THE WORLD
These 11 full color paintings are the originals produced in 1949."  The picture accompanying the lot looks like this: 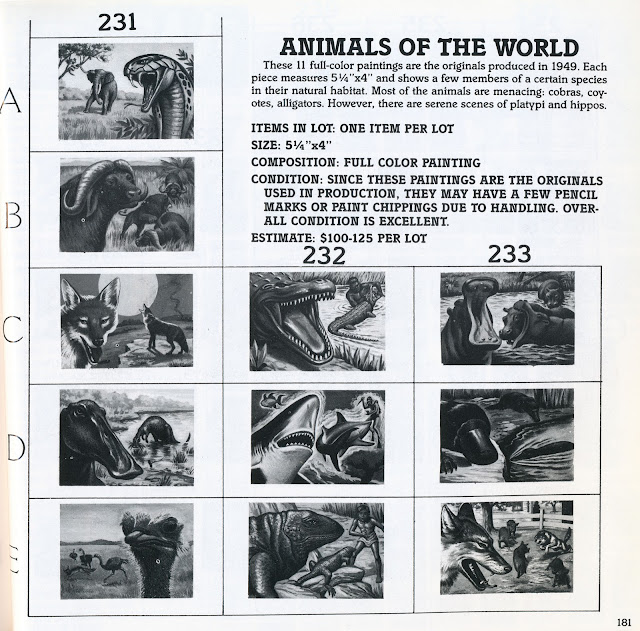 Those look pretty close but not identical to Bring 'Em Back Alive but in no way, shape or form depict subject matter from Animals of the World!  Take a look at these Net54 Vintage Non Sports Club gallery pages (BEBA here and AOTW here) and see for yourself.  That ostrich in the lower left corner is scary looking!
So what happened?  I'm not really sure but suspect that Topps could not obtain licensing for a second series of cards from Buck's estate, then for some reason halted production of the artwork for the second series and instead went with Mary Baker's paintings, which were well-known as part of a children's book, instead.  This could have been done to save money but I think it probably was instead foisted on the public to show all the alarmed Moms of the world what good, wholesome eggs they were down at Topps.

"However, there are serene scenes of platypi and hippos."

Hippopotamuses must have had some great public relations firm representing them at some point, because they are every bit as ornery and dangerous as alligators and crocodiles, yet they somehow have a cute and lovable public image. Anyone who has actually seen a hippo in the wild would know that the scene depicted of the hippo, unless there is a bird cleaning it's teeth, is likely far from serene.