Bonjour et nous saluons le retour!  Today we continue our foray into the nether realms of 1960's Topps and O-Pee-Chee Hockey, moving on to 1962-63, a year which, to me, marks the beginning of Hockey cards being true Canadian products and began the linking years leading to the massive explosion in hockey cards that occurred in 1968-69. 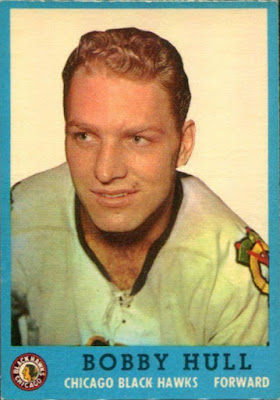 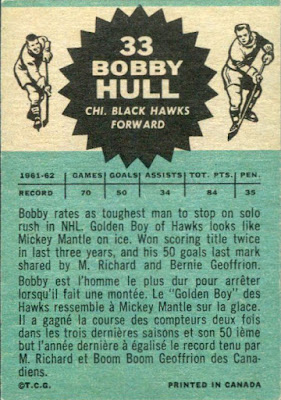 Check out this 1962-63 wrapper, which I had to nick from the first edition of the Vintage Hockey Collector Price Guide, which not only has a nice ad for Bozo gumballs, but is also a very French information/ingredient panel. The wax wrapper for this year is a tough one, while cello packs were possibly distributed (without the Hockey Bucks, which might explain that insert's relative scarcity); perhaps Quebec got the wax and the rest of of the country got the cello (if they were even issued)? Everything was clearly Canadian at this point: 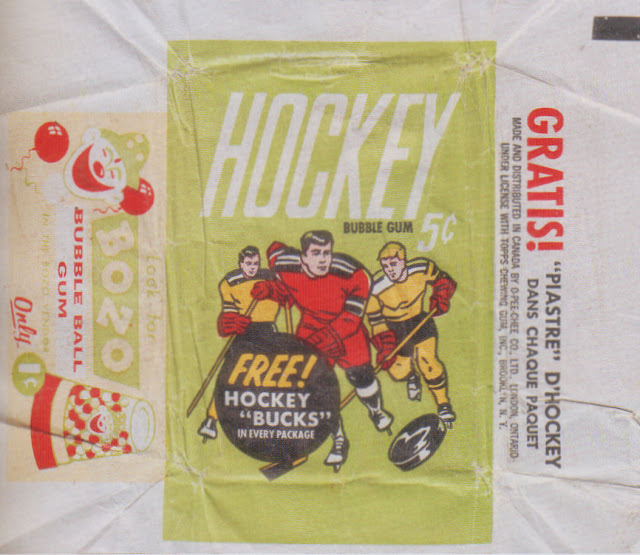 In their last year of competition with Parkhurst things went horizontal for 1963-64: 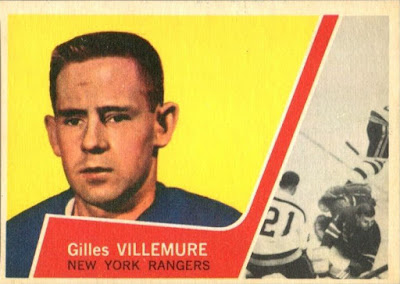 Wrapper-wise, this guy looks a little goofy, doesn't he? 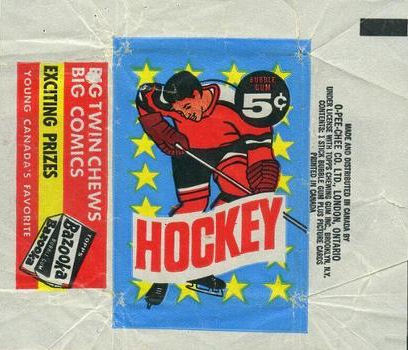 All Canadian again, even the Bazooka ad!

With no competition for 1964-65, all six NHL teams joined the party and Topps stretched their cards: 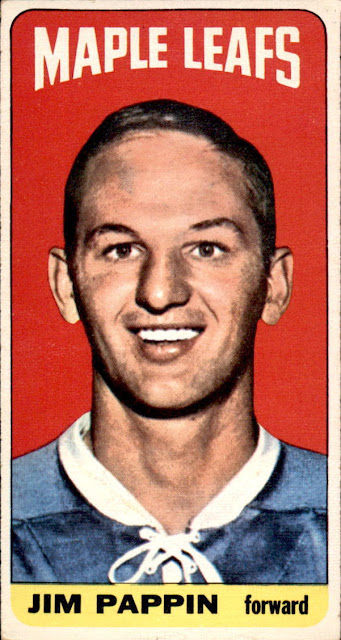 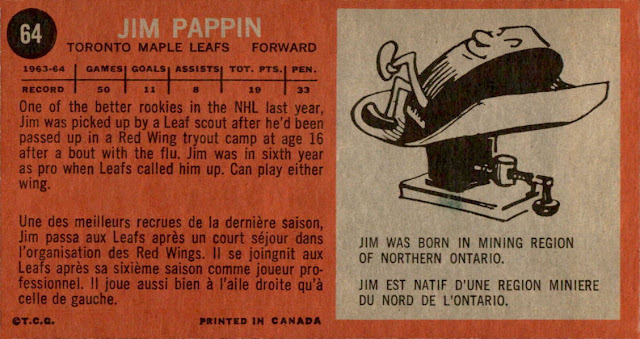 The tallboys would see daylight again for the 1965 Football release but they don't seem to have weathered the production process well and the experiment would be shut down until the 1969 Basketball set was released.

The O-Pee-Chee indicia was beginning to normalize though: 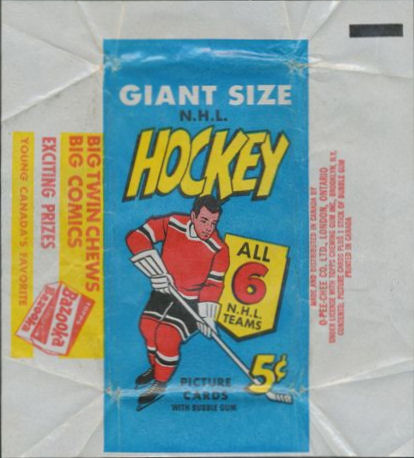 I like the Giant Size moniker, a nod to the 1952-56 issues from Topps.  It's interesting to note there are 5 cent and unpriced wrapper variants for this year and the next. Once again I wonder if they bifurcated them between Quebec and R.O.C. (Rest of Canada). I had to snag that wrapper scan from a cool website, whose name and link I promptly lost! If it's yours, ping me and I'll add the link. 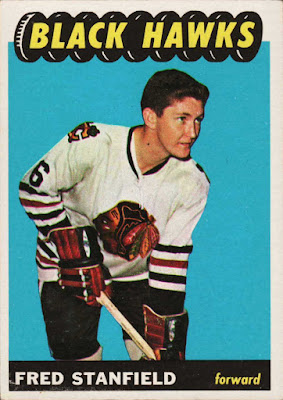 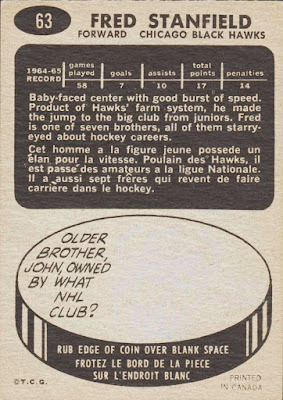 As mentioned above, there were priced and unpriced variant wrappers this season. Here in an unpriced version I once again had to snag from Bobby Burrell's Vintage Hockey Collector Price Guide. Bobby, by the way, is not sure that there was a Quebec specific wrapper at all so more research is needed: 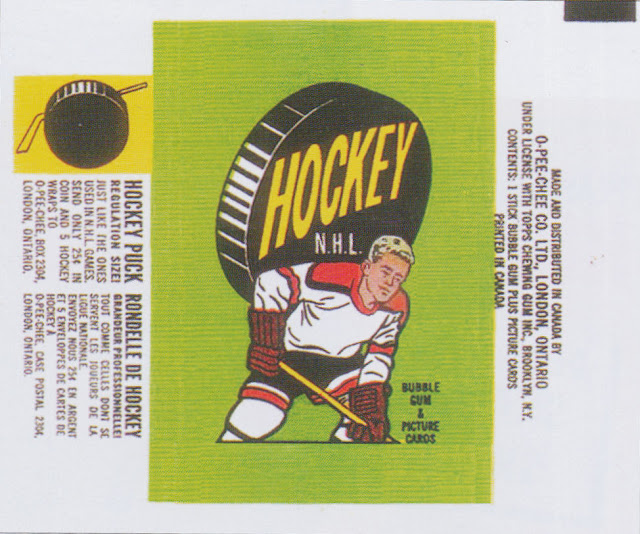 Dig that premium offer!  Unlike in the US, where Topps used third parties to process premiums, O-Pee-Chee fulfilled the orders for the pucks directly. And isn't "rondelle" a much nicer name than "puck"? That is a tough wrapper; it's thought the set was mostly sold in cello packs (once again, if they actually exist) and vending.

The 1966-67 release would give us woodies and an odd way of showing each player's stats: 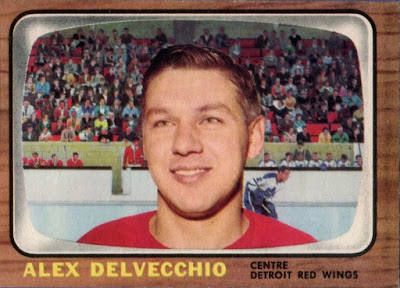 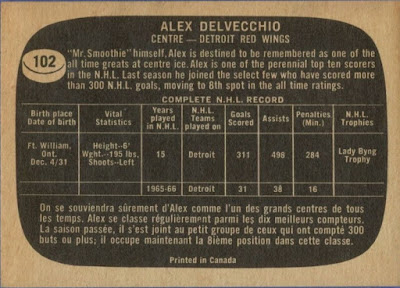 This year is a doozy as there is a '67 notation added to some wrappers.  Why?  I'm not really sure. 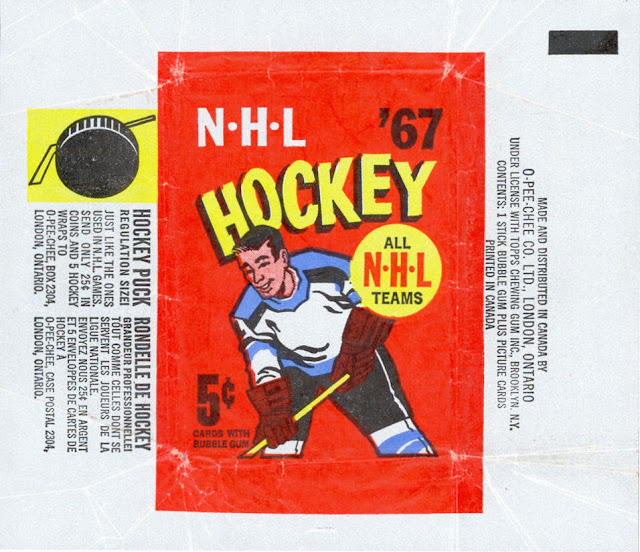 But wait, there's more!! Topps also released a test version of the set this year in the US.  In a very Bowman-esque move the wood grain was lighter than on the Canadian release while in a very Topps-esque move they retained the anglicized spelling for "Center" ("Defence" would also remain): 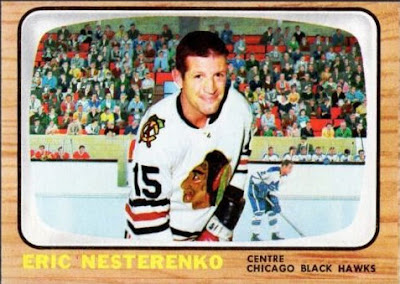 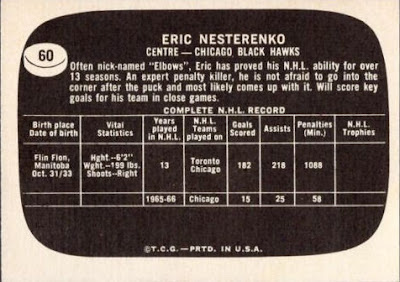 Since they changed the backs you would think they would also change the fronts!  Bizarre...

Topps also changed the wrapper for the US release: (which I once again nabbed from VHC): 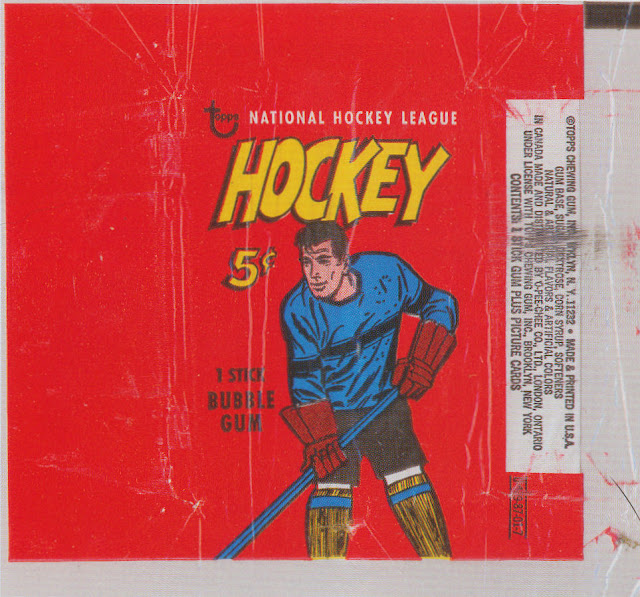 If you think that looks extra crinkly, you're right-it's a cello wrapper.  And dig that 1967 commodity number (a.k.a. product code), its product number (the second batch of numbers) is just one behind 1967 Football!  The USA set is thought by Mr. Burrell to have come out well into 1967, possibly even as late as October. In addition, he thinks it's a bit less testy than most test issues of the era. It may have been more of a limited release, as the pop on the Orr rookie is pretty high for a true test (around 80 graded by PSA right now) and a few collectors recall buying some packs off ice cream trucks in California.

That is one rare wrapper kids-one known! It's certainly possible both the cards and wrapper material were both being tested. The Topps/O-Pee-Chee split information is also a sign of how Topps was printing wrappers by then.  It was easier to put all the information on both the US and Canadian wrappers instead of dividing them up by country of distribution and you see this on all kinds of issues going forward. I don't think these were issued in Canada but you never know.... 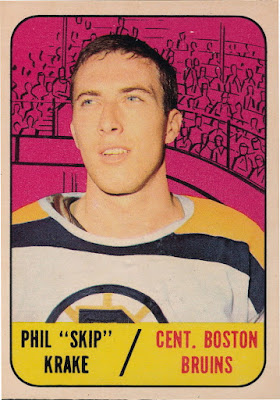 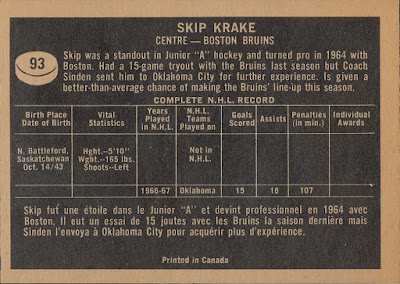 Topps barely redesigned the reverse from the prior season.  Cheapskates!

We'll end it today with the last of the Topps/O-Pee-Chee wrappers. After the 1967-68 season Topps would issue their own set in the US while O-Pee-Chee did the same, usually in a more expanded edition, in Canada.  No more wrapper variants for the final year of Topps-only, just this: 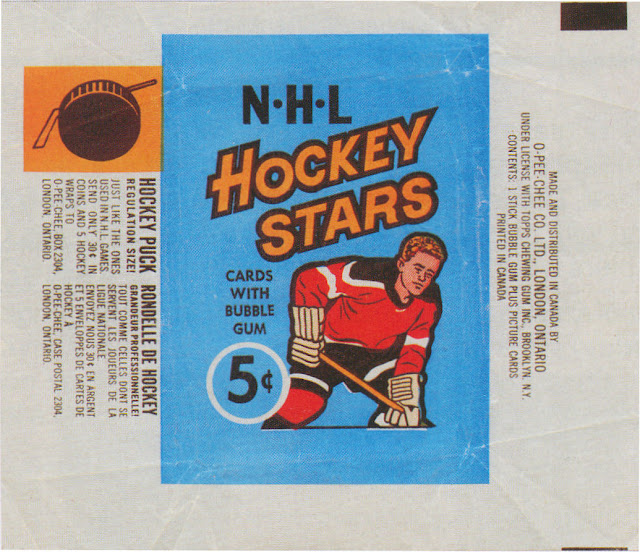 Notice how it took another nickel to get the hockey puck premium this year! That's another blatant grab by me from VHC-that wrapper is scarce yo!

If you are curious why I am hedging my bets on cello packs being issued in  Canada, Bobby Burrell is not 100% convinced they are all legitimate.  So the jury is out until it can be shown there were promotional materials or retail boxes made for these products.

Love seeing the vintage packs. I'm the kind of guy who saves every single empty pack I open, it does not sound like anyone did that back in the day with only one known example.

The 67-68 Krake card is actually an error card. It's Don Awrey pictured

An error: in the Parkies 1954-1955 set , card #13 shows Floyd Curry instead of Paul Masnick.
And there was a randomly bonus in that set: a glossy photo (blank back) of Henri Richard. Same size as the other cards.
!
You can see it on my blog. I still have two copies with the set I collected then: one in excellent shape, the other badly scotchtaped !
https://sanmaur-mauricie-cantin.blogspot.com/search?q=masnick

Would you have any out of the cases from thise years?