Continuing on into 1963, Topps revisited their past (shocking I know!) by repurposing the metamorphic "picture tricks" Funny Foldees sets they had issued twice before (in 1949 & 1955) into their Valentines day release for the year, Valentine Foldees.

Most famous for the Babe Ruth card within this 55 card set featured a design motif described as "wheels" and was quite a bit larger than its historic predecessors at 2 1/2" x 4 11/16": 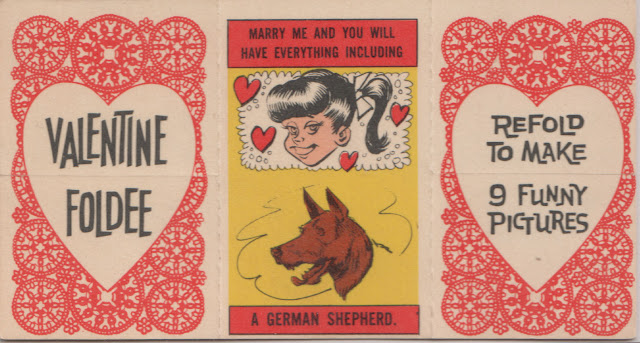 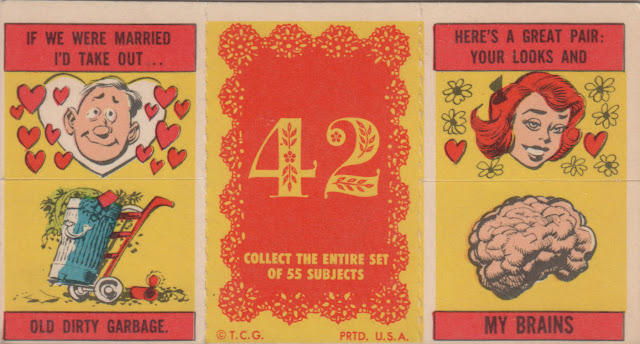 What the heck, lets show some uncut partial sheets from my friend Al's Love Of The Game Auctions.  Note the Babe Ruth's at lower right: 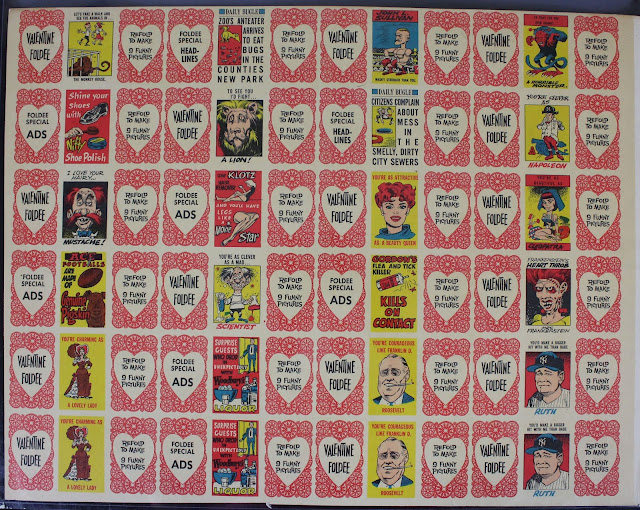 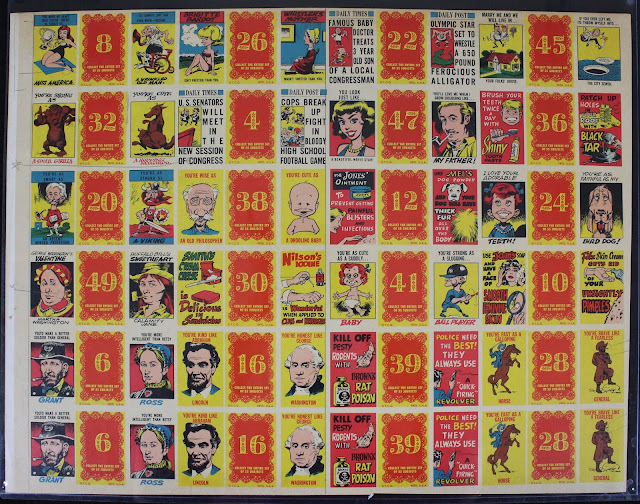 These Wally Wood creations came in a vertically oriented wrapper: 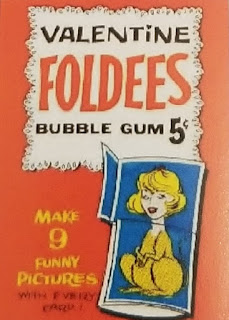 Five straight years of no-nonsense Valentines issues through 1963. Then, things get weird.......

None of the major (or minor) hobby guides show an 1964 Valentines issue for Topps.  My money is on Valentine Wood Plaks, which is generally attributed to 1962. My issue with that date is the original issue of Real Wood Plaks came out in 1962, a year which already had Valentine Stickers.  The Wood Plak issues get mixed up rather easily but I believe this is a 1962 Real Wood Plak:

While this is what I believe to be a Valentine Wood Plak:

There are two distinct wrappers: 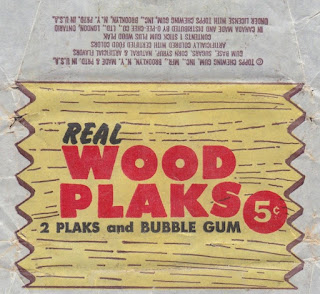 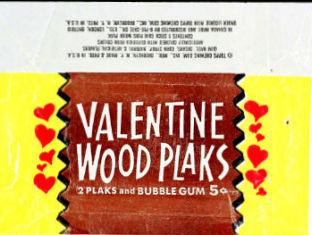 My current thinking is the Valentine version came out in 1964. Todd Riley's non-sport.com site has 74 different plaks ID'd and based upon that I would be willing to bet between the two sets there are 77 different, likely one set with 33 and the other with 44.

1965 brought a reissue of the 1961 Giant Size Funny Valentines.  The backs were red this time, not orange: 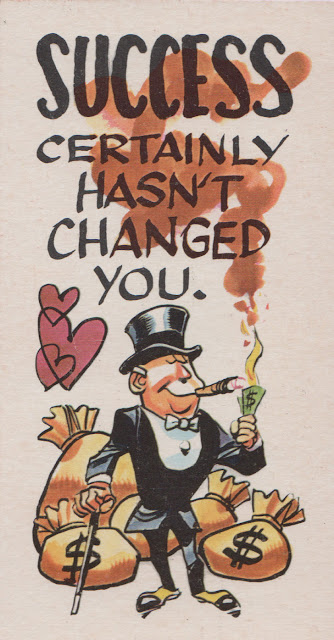 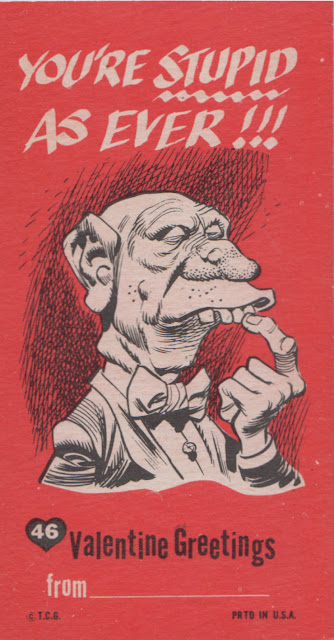 The 1965 wrapper was very, very close to the 1961 version with the boy's hair now blond and not red:

1966 would seem to be more settled but I'm not so sure about that.  Conventional Hobby Wisdom has Frankenstein Valentine Stickers coming out in 1966, presumably based upon the Commodity Code on the wrapper.  These were first used in 1966 but after I show the pix, I will expound: 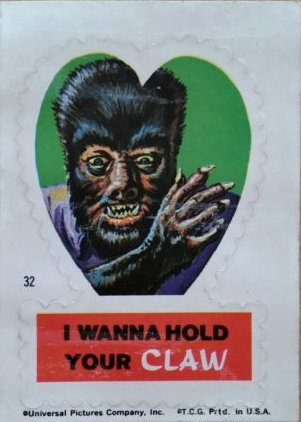 The wrapper is one of the best ever by Topps IMHO: 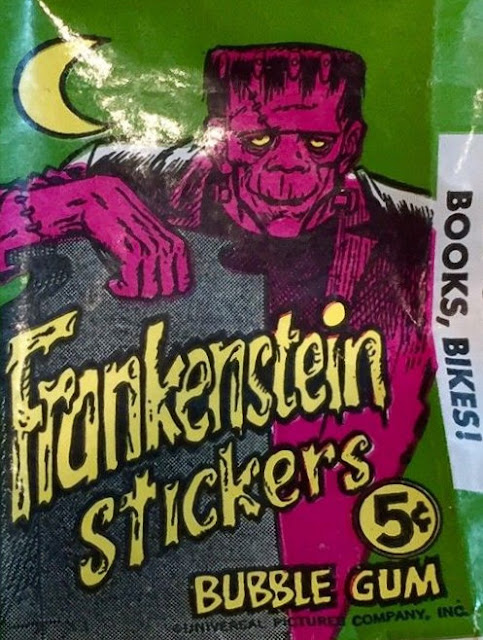 But the thing is it doesn't say anything about Valentines.  Not 100% unusual for Topps as the box sometimes held the key:

So here is that Commodity Code:

Clearly 1966 based upon the last digit.  But the problem I am having is the codes generally give the year of concept origination and for a Valentines Day issue to get out the door, it would be an awfully quick turnaround I think.  Topps started using the codes only in this year after moving their plant to Duryea, PA so it's possible the early issues in '66 were not handled the way they would be a few short months later. Still, Frankie could be from 1967.  I am also of the opinion a planned regular issue monster set was tabled and the Valentine connection was hastily added to the box art.

Topps issued a set called Insult Postcards in (possibly) 1966.  They are exactly what you would think but with one enhancement: 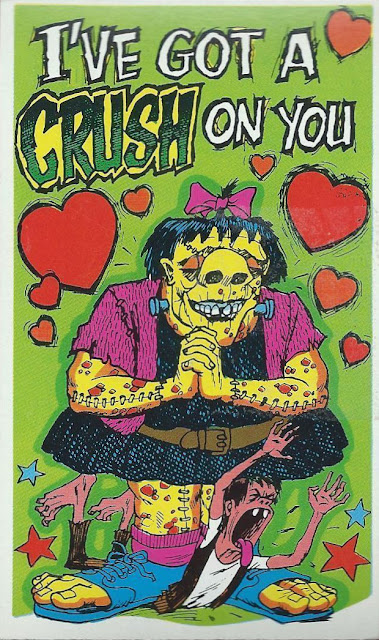 They all have a Valentines theme!  Also of interest, you can see things are getting a little underground-y comixy here as Woody Gelman got the heads up on talent from Robert Crumb before he departed Topps and NYC: 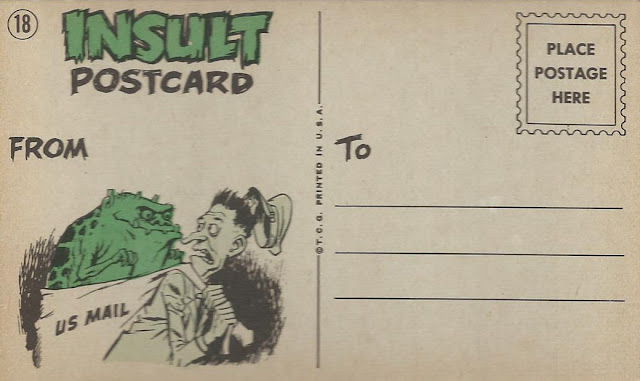 We'll get back to that back in a minute. First, take a gander at the wrapper: 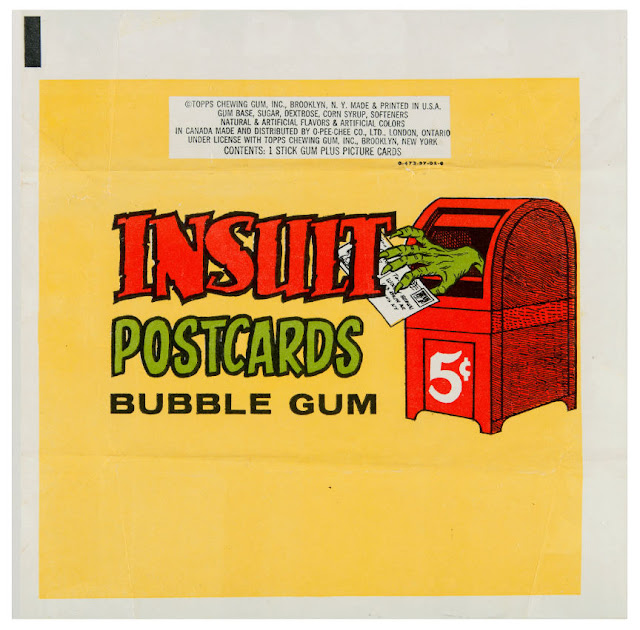 You can just make out that Commodity Code- it ends in 6. They came in this box: 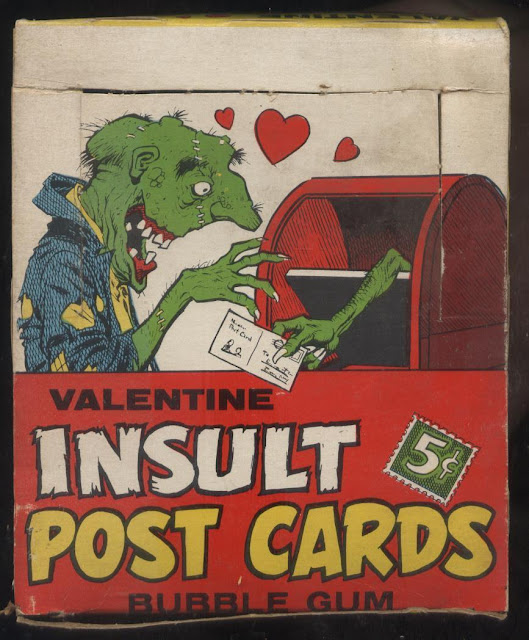 And check out one of the side panels:

An extra word and a couple of floating hearts and voila-a match for the wrapper!  This set was probably conceived as a non-Valentines issue and then converted. I wish I could see the Commodity code but no dice.  There are no distinct Valentine Insult Postcards backs. So did this set come out in 1967?  I have to believe either it or Frankenstein Valentine Stickers did, with the other coming out in the other year. Crazy man!

You would have to think one of the sets with the -6 codes came out in 1966, right?  Or maybe Topps fooled us all and reissued something in cello packs or some other sinister way designed to thwart my research a half century later......

Just you wait...it gets even more confusing in the last years of the Valentines Day cards. See you next time!