Further to last year's lengthy post on the 1970 Cloth Baseball proofs, Friend o' the Archive Keith Olbermann sent along a shot of the elusive Rich Nye example, one of three subjects to appear in a different pose in issued form than on the proof sheet used to create these rare birds.  Topps got the correct team on the card following his trade from the Cubs to the Cardinals but he's still shown in his Cubs togs on the proof.  He would get a capless head shot in the regular issue: 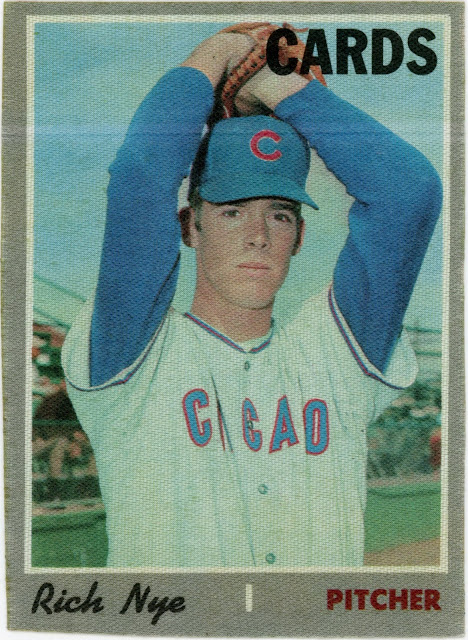 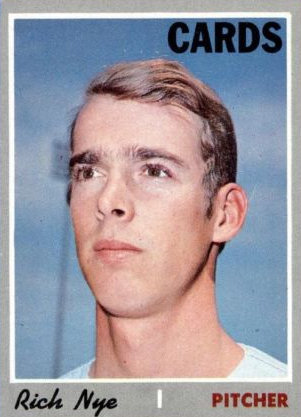 Nye is one interesting cat.  He finished his civil engineering degree after being drafted by the Cubs in 1966 and then after pitching his last (for the Expos) in 1970, traded commodities on the Chicago Mercantile Exchange and later became a veterinarian using his profits from that endeavor, specializing in exotic birds.  Frankly, he sounds like a polymath.

Another tidbit: there are at least three different examples of the Lemaster known, including one without a backing where the color proof bars at the bottom of the sheet are folded up against the reverse.

The known universe of cloth stickers is small but these are not one-of-ones. The multiple examples should not be surprising, Topps would run very small batches for their in-house tests at the time.

There are 11 "lost" stickers (they exist on checklists but I don't have scans) :

The Padres Rookies is the lostest of the lost as it has not even made it onto a checklist I can find (and obviously not on the Trader Speaks checklist I detailed last time out), and while Tom Hall is also MIA from TTS he does appear on extant checklists.

I will gladly accept scans of the above MIA stickers if any of you out there have them in your own archives!

Topps also forgot to include the All-Rookie trophy on Nye's 1968 card! (Rick Monday's and Dick Hughes' cards too.)

Being a Cardinals collector, I got really exited when I saw the Nye cloth card in a Cubs uniform. Then, after 10 seconds of celebrating, my heart sunk when I saw that the team name at the top said "Cards". Ugh! Now, I have to keep in on my want list.

Then, to make matters worse, I just saw the Davalillo on the checklist. Now, I have to add him to my want list!